GORGONOCEPHALUS!! Because Weird is what we do! 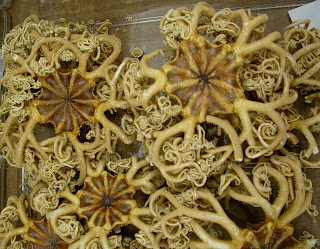 Its been awhile since I've done a "creature feature"..so today, I give you the "Basket Star"aka Gorgonocephalus!!  Go here for a photoessay.

Gorgonocephalus belongs to the class OPHIUROIDEA, that is, it belongs to the same group as the more typical 5-armed "brittle stars" you may be more familiar with. Such as the one here and the ones here.

Gorgonocephalus occurs mainly in cold-water environments, and is found in the Arctic, the Antarctic and in the deep-sea throughout the world. Although, shallow in some places (such as Alaska, Canada, etc.) it is found mostly in deep-water. There are about 10-12 species (look them up here). Good luck telling them apart though. Many are VERY similar in appearance and are distributed over a wide range... 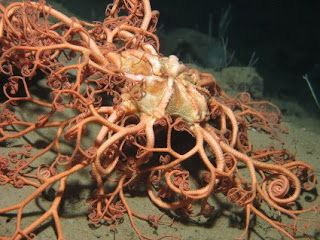 (from the Serpent Project)

Unlike most other ophiuroids, the special "basket star" and "serpent star" group have a VERY different arm structure related to how they feed. For example:

1. Arm structure in basket stars has a thick, fleshy covering over the basket star endoskeleton. If we look at a cross-section through the arms, we see in green that there is an exterior leathery "skin" that completely covers the calcium carbonate "ossicles" aka vertebrae that compose the arm structure. 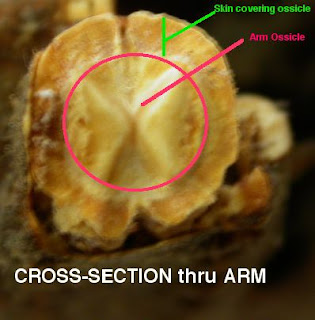 ...and here's the rest of it! (with skin removed from vertebrae-like endoskeleton) 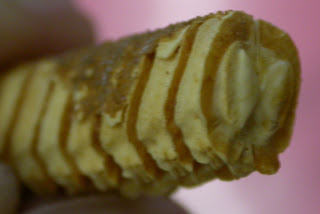 2. Arm structure (i.e., the vertebrae-like endoskeleton) in this group SPLITS (aka bifurcates) instead of staying in a single linear series. 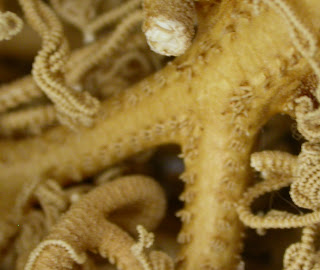 There's a whole bunch cool stuff about Gorgonocephalus, the least of which is its NAME, which literally translates into "Gorgos" and "-cephalus" aka the Greek for "Gorgon's Head" named for the fearsome monsters (e.g., Medusa) with snakes for hair whose gaze could turn people to stone!! 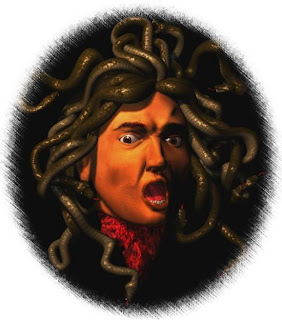 ....and here is one for comparison! 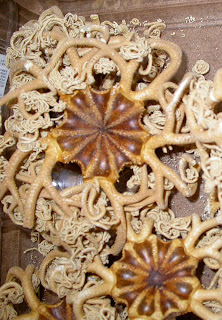 Remarkably little is known about these animals. But there are some GREAT feeding studies on Gorgonocephalus, including this recent one by Rosenberg et al., (2005) and this earlier one by Emson et al. (1991). So, let's look at that!

FEEDING in Gorgonocephalus is relatively straightforward. They sit on perches, often corals, sponges, rocks or sometimes just on the seafloor bottom like this:


Gorgonocephalus feed mostly on small crustaceans and similar critters, such as the "northern krill" Meganyctiphanes norvegica . That's in contrast to other kinds of "filter feeders", like crinoids, that pick up small to microscopic food particles.

Functionally, this makes basket stars-PREDATORS! Pretty weird ones, when you think about it.. 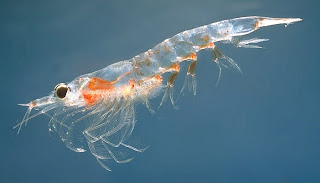 How do they feed? They use their crazy numerous and COILED arms in big, extended feeding "basket", which coil and curve in and around on themselves...like this... 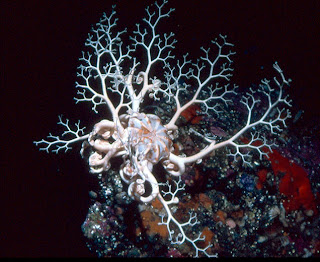 Bear in mind that the arms are covered with HOOKS and SPINES! 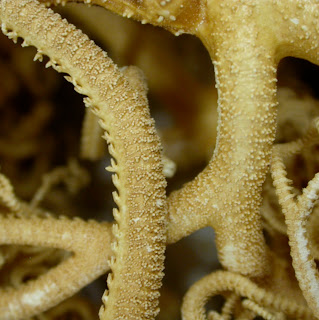 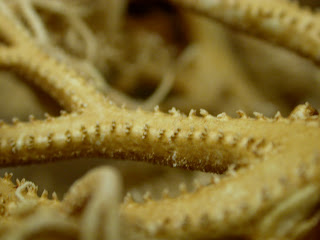 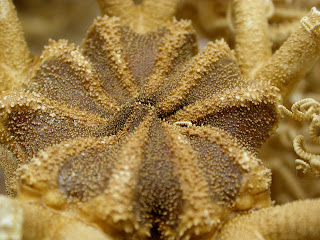 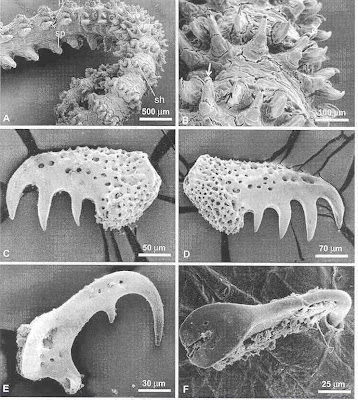 (Fig. 2 from Rosenberg et al., 2005)
These hooks function along with spines and the tube feet to capture (i.e., snag and snare)prey that get too close! and work it down to the mouth... 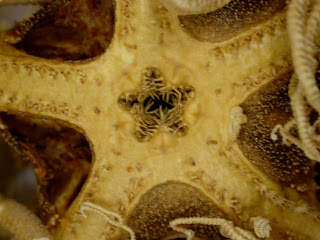 Which, represents the SECOND echinoderm-thing that kinda looks like the Sarlacc pit from Return of the Jedi!! (or maybe the Sarlacc is just a giant desert Gorgonocephalus???) The studies I read suggest that Gorgonocephalus prefers a pretty mellow current.

Rosenburg et al. (2005) mention that in high current speeds (> 50 cm/second) these animals have difficulties keeping their arms stretched out and the number of curled arms increased, which they believe will decrease drag!!! 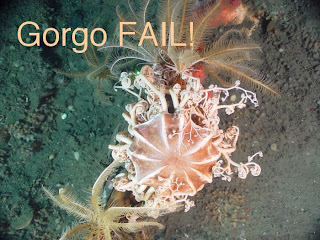 (from the NOAA photo library) 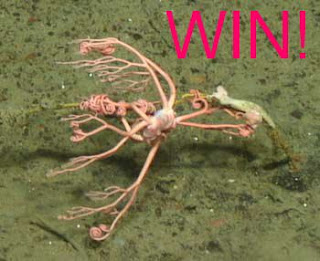 (this image originally from Serpent Project.org)
Posted by ChrisM at 1:06 PM

Do they form a monophyletic group? If so, what is their closest 5-armed relative?...Thanks for the great post!

Asking for their closest 5-armed relative is probably someone's PhD dissertation at this stage!

thank you!! they have one of these at the Seattle Aquarium, and I forgot what it was called. I was just obsessively searching for the name when I found your blog. Awesome.