Curious postures in Pycnopodia helianthoides!! Are these related to Starfish Wasting Disease?

The other day, I received an email with some images taken by Jan Kocian, a photographer/diver in the Pacific Northwest (I believe in Washington state) and he has been observing some unusual postures in Pycnopodia helianthoides (the sunflower star).

We have already received some interesting photo evidence of massive populations/swarms of Pycnopodia in the Canadian North Pacific. (click here to go see)

Normally, one sees Sunflower stars like this:
Just kind of casually lying about, flattened with their body splayed out.

But Jan has been observing them scrunched up and in these odd knots... 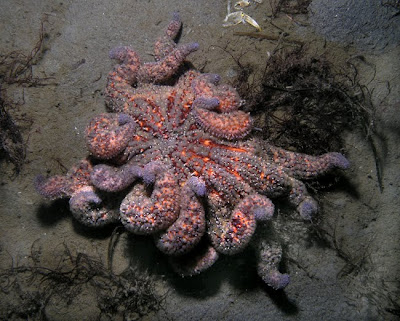 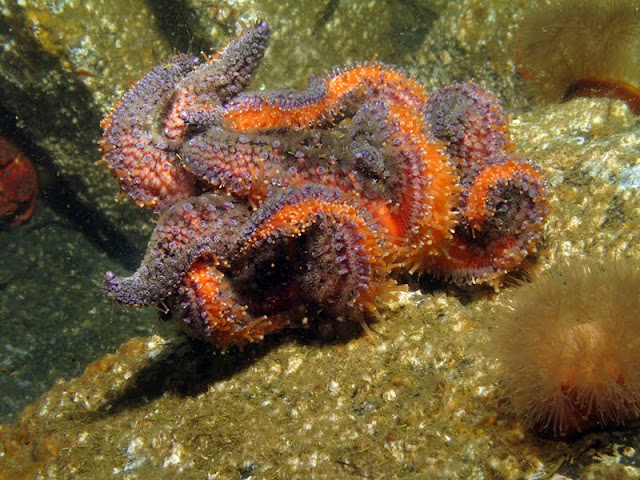 (images by Jan Kocian and are used only with his permission)
or rolled back over their body... 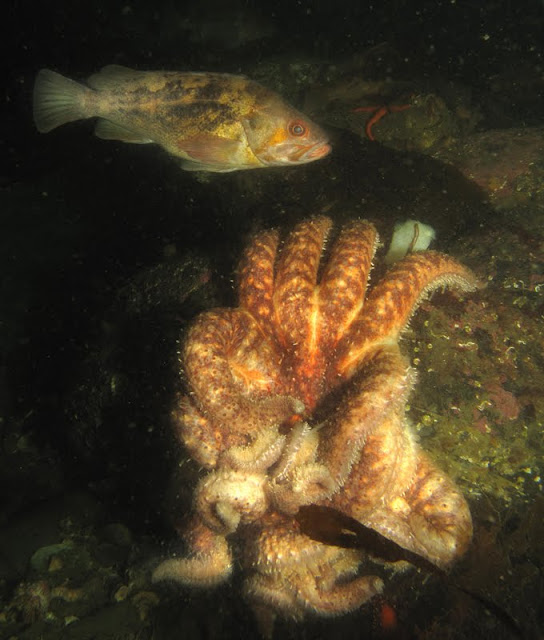 (images by Jan Kocian and are used only with his permission)
Its unusual.

Part of my attraction to echinoderms in general is that their evolutionary "solutions" to so many of life's challenges are so...odd.

Behavior or adaptations observed in a 4 legged mammal might be directly obvious. If you spy some vertebrate with a head and 4-legs that you've never seen before, it will probably have a predictable suite of behavior. It might follow a trace of odors with its nose or itch itself with one of its legs.

Sometimes...I've seen other sea stars..such as the Antarctic Labidiaster fold up on themselves if they are given food... 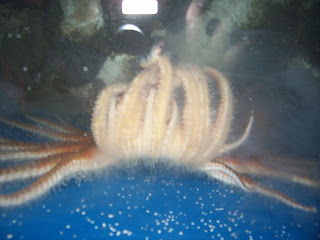 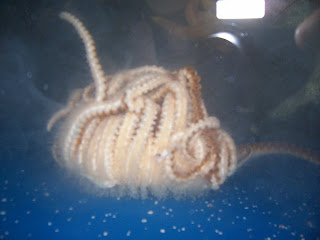 But there's no obvious food present AND as far as is known, Pycnopodia doesn't feed on tiny swimming crustaceans in the manner that Labidiaster does...
So, this begs the question "Why is Pycnopodia doing this???" some guesses:

-tube feet antagonized by something on the substrate? (sea anemones, unfavorable bottom texture, etc.)
-some sort of grooming behavior-removing parasites, etc.?
-something related to feeding? (no obvious food source in pictures however)
-stress response? disease?

Have YOU-the Echinoblog reader seen this? Or have an explanation? Please do enter in the comments below!
Posted by ChrisM at 2:27 PM

perhaps it's the first case of cultural phenomena among echinoderms? ie. it's dancing!
.
.
.
(sorry - I'm so incapable of reasonable contributions to your blog, but enjoy reading it so much)

No worries! All manner of comments are welcome so long as they are not spam or mean-spirited!

And as far as echinoderms go, given their potential behavioral complexity-who knows? :-)

Perhaps pollution/bad water quality? I've had sea stars fold up their arms in my aquarium if my nitrate gets too high... perhaps other toxins could cause the same thing.

Mimickery: In that form, it does look a bit like an octopus, an anemone or a bundle of worms. Perhaps it is mimicking a toxic species?

Parasitism: Perhaps they have been parasitised by something that has modified their behaviour to increase their visibility to predators?

must I explain the obvious. It's tantric yoga.

The Tantric aim is to sublimate rather than to negate relative reality. This process of sublimation consists of three phases: purification, elevation, and the "reaffirmation of identity on the plane of pure consciousness."

From the looks of it they are all in the "purification" phase, very intense.

I have noticed a similar behaviour in Pisaster ochraceus on a few occasions. Typically it was when they were in distress, autotomizing an arm, had an injury etc. Not sure with these Pycnopodia though.