Plumbing the Depths of Guts in Deep-Sea Sea Cucumbers!

And yet for all of their bizarre appearance their fundamental appearance seems remarkably simple..

They troll around on the deep sea floor (and by deep-I mean the TRUE abyss over 1000 meters-and usually 2000 to 5000 meters deep!) rooting for food as these elasiopods are doing...

When biologists started seeing these bizarre animals-they also realized just how MANY of them seem to be present in any one spot. 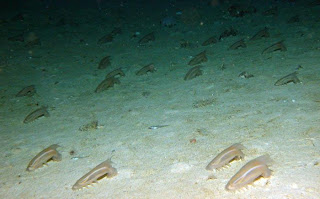 (from New Scientist)
Sometimes numbering in the 100s in quite a small area! And so naturally a LOT of important questions began popping up.
In addition to all of this, awhile back, I happened to get a classic question relating to sea pig biology- "Can I have one as a pet???" And the answer was "No." for various reasons. (click here to see that post).

But today I have yet one MORE reason why deep-sea sea cucumbers (including sea pigs) just won't make good pets! (and delve into the biology of these weird deep-sea animals!)

Data for this paper comes from two sources: A paper by Jody Deming and Rita Colwell (University of Maryland, 1982-go here to see it) and another by Teresa Amaro and others in Deep-Sea Research from 2009 (here to see it).

The paper by Deming and Colwell looked at the microbial floras of three genera of abyssal sea cucumbers sampled from the South Atlantic..... 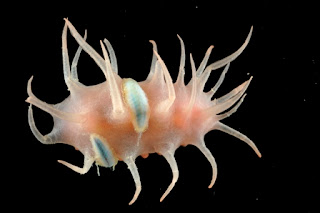 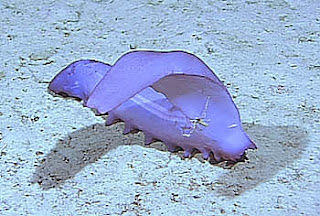 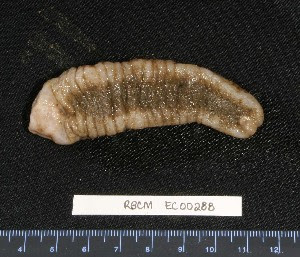 Deming & Colwell sampled the microbial faunas from the intestines of these various holothurian species, sampling different cultures from the gut (# 2) and parallel to stomach in humans) versus the hindgut (#3) (parallel to our long intestines)..Here's a nice image from Amaro et al that shows this...

It turns out that microbes..specifically bacteria WERE present in the intestinal lining of these sea cucumbers! And in significant abundance!! 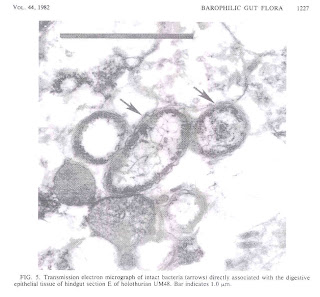 (Fig. 5. Transmission electron micograph of the bacteria in the intestinal lining)

These microbial floras were 1.5 to THREE times higher in sediments that had been recently ingested than those where present in the surrounding sediments.

The abundance of these microbes was HIGHEST in the hindgut..where digestion in the intestine occurs (again the equivalent of our long intestine).

But perhaps what was most significant was that these microbial populations were actually MORE ACTIVE under deep-sea pressure (about 400 atmospheres given that "home" pressure was from about 4000 meters!). "Pressure loving" bacteria are what's known as barophilic
(etymological note-that's "baros" for pressure-like in barometer and "philos" for attraction or lovin'...oh yeah...)

Dynamics of the bacterial/microbial community:


At this juncture I can take a moment to further embellish the answer: Why would deep-sea sea cucumbers make lousy pets? Well, these things have a community of microbes that live in their intestine that they need to survive. And they are MOST successful at deep-sea pressure! (400 atm!)

So-food would likely have a lot of problems metabolizing in these beasts at the surface..assuming they could get the right kind of fine quality, organic scum to begin with!

A study that further added some understanding to our knowledge of these gut communities comes from a recent paper by Teresa Amaro and others in Deep-Sea Research from 2009 (here to see it).

Their study focused on the North Atlantic deep-sea sea cucumber Molpadia musculus which is just a lovely animal that is basically a big mud-eating yam-shaped bag..

Yes, I've seen them alive, they are THAT glamorous. Sometimes they are purple.

Amaro and her associates characterized the microbial community within Molpadia with DNA fingerprinting and discovered that in fact, these communities can be quite diverse, with many lineages of bacteria present... 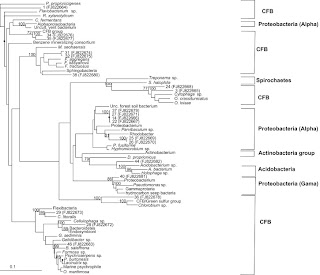 But perhaps what is most interesting was their study that compared two populations of Molpadia-each population present in a different canyon. Each canyon with a different nutritonal setting!

How might these different food rich/poor settings affect the microbe fauna of each sea cucumber population?? 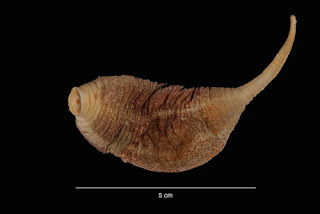 The authors compared the bacterial communities present in a canyon with a sediment bottom that was rich in organic matter (i.e., food!) versus one which was poor in organic food.

They found that in the canyon with a rich sediment bottom with lots of yummy organic food, the Molpadia did not need to develop a specialized community of gut bacteria!

In contrast, the population of Molpadia present where the sediment was poorer DID have a more specialized community of bacteria.. Does this augment or provide further nutrients to the host cucumber?

So-getting back to some of the questions asked earlier.. these bacterial communites seem to be an important part of how these weird critters live their lives- as they trundle around on the sea bottom picking up delicious scum from the abyssal mud of the sea bottoms! Perhaps they carry it with them or perhaps they are feeding on them? Many questions remain!

It always seems kind of a funny contrast to me as I observe individuals become so paranoid about bacteria on door knobs and small microbes everywhere in the air.. that at 4000 to 5000 meters below the Earth's surface bacteria (yogurt?) are actually essential to this abundant form of weird life....
Posted by ChrisM at 6:13 PM

Dude, this is awesome! Thanks for dredging up that cool video. Are these guys perhaps the deep-sea equivalent of earthworms, keeping the soil nice and loose and rich? I bet there are other organisms out there benefiting from the turnover, even if it's just different kinds of bacteria . . .

Danna,
In shallows, cukes are more analogous to earthworms Here's something about that in sea grass:

In the deeps-they are more like cows...feeding on the marine snow as it settles but also "carbon cycling" and so forth. They haven't plumbed the full depth of how important sea cucumbers are in the deeps..but given the incredible biomass I think its likely to be great..

This is really awesome! It's really fascinating.

Hello there,
This site is really well made and it is a good sum up about the feeding "strategies" of deep-sea holothurians. However, there is a little mistake there. The picture that you say that is from Deming & Colwell, it is not, so be aware of that....