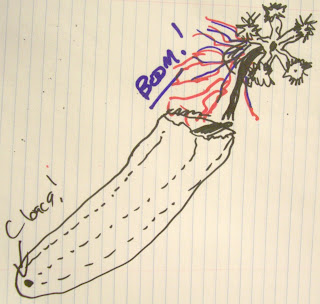 (From the Echinoblog Art Department!)
So, you've probably heard of this.

EVISCERATION! Explodoing Guts! One of the things that sea cucumbers (class Holothuroidea) are probably best known for when you learn about them at aquaria and in introductory marine biology classes!

Sea cucumbers are, of course, the "worm-like" echinoderms. They usually eat fine mud or organic goo and are composed of 3 main parts!
First-a mouth (surrounded by tentacles)
Second-some guts!
Third-a second hole for spewing out what doesn't get eaten!

You wouldn't think that something so seemingly basic-would be capable of so many WEIRD ass things. But as we'll see they are.

Information from today's post comes from 2 primary sources: 1 from a review by Jose Arraras and Michael Greenberg and a second paper by Maria Byrne from 1985 on evisceration in the west coast sea cucumber Eupentacta quinquesemita! (abstract here)

A sea cucumber behavior wherein they can EXPEL their "guts" THROUGH their body wall.

Yuck. AWESOME. The most awkward super power ever!

Its often associated with defense-but as we'll see, there is always more..

I limited my coverage here strictly to evisceration (the general behavior) but next week..I'll delve into a special sub-section of evisceration...

1. How it Works: Evisceration and REGENERATION!!

So when we refer to "evisceration" the first word that one sees is "viscera" which usually refers to the intestine. Such as what we see in this diagram in purple!

But what is often seen in evisceration is an expulsion of MOST or MANY of the various organs inside as we see here...

That includes gonads (for reproduction), their "respiratory tree" (basically gills for "breathing"), their hemal (i.e. circulatory) system and of course, their intestine!

Different kinds of sea cucumbers evert/expel different organs. These can also vary depending on certain times of the year (as we'll see).


Basically what happens inside the body this:

One tropical family of sea cucumbers, have special structures called Cuverian Tubules which are adhesive and used specifically for defense. I'll be blogging about those-hopefully next week..so I will hold off on saying much about those for now.

2. Who Eviscerates?
Interestingly, the extent to which evisceration occurs varies among different groups. Here is a generalized classification for sea cucumbers taken from the Holothuroidea Tree of Life page.

Evisceration has apparently not been observed in the others (which are curiously-mostly made up of deep-sea members). Its not clear if some deep-sea sea cucumbers-such as sea pigs eviscerate or not.

Some of these non-eviscerating groups (such as the "Apodida) DO have very potent powers of regeneration!! -which is something we'll discuss below.

A. The "Dendrochirotida" apparently eviscerate primarily through the ANTERIOR end! 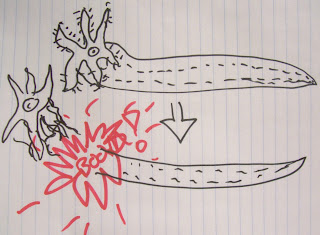 (From the Echinoblog Art Department!)
Apparently the body wall plus muscles, nerves and the cloaca survive and ALL the "lost" parts are regenerated!

Some experiments dissected two dendrochirotidans-Sclerodactyla and Thyonella into "anterior" and "posterior" regions.

Apparently under lab conditions the anterior sections died. And not ONLY did the posterior regions survive-BUT the segment including the cloaca could REGROW the ENTIRE animal.

Recent experiments have suggested that relatively young animals can regrow a body from either region. So the potential for regeneration may be related to the growth of the animal in question.

B. In contrast-those sea cucumbers in the other major group -the "Aspidochirotida" eviscerate through the POSTERIOR end! 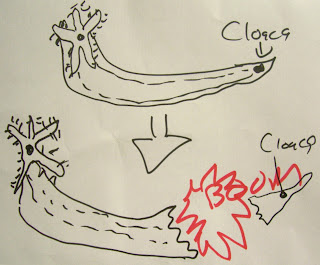 (From the Echinoblog Art Department!)

Apparently this group shows a different array of evisceration and regenerative abilities. The species that have been studied don't instantly die if cut into different regions but apparently several taxa are capable of asexual reproduction-and so its unclear to what degree this group shows any limiting factors to regeneration.

3. Why do sea cucumbers Eviscerate?
Since evisceration was discovered-one of the most apparent ecological interpretations of "why would it do that???" was explained as "for defense."

It often expels those viscera (which are often quite sticky, gross and inundated with toxic body chemicals) towards oncoming predators-which usually include fish and hungry starfish!

But as sea cucumbers were better studied-it turned out that these cases were not quite so clear cut! And defense was sometimes just not an option.

For example, one of the better studied sea cucumbers-Eupentacta quinquesemita

and sure enough, tests with expelled viscera and a place for the sea cucumbers to hide was effective against one of their most aggressive predators..the sun star.. Solaster stimpsoni

Interestingly though, Byrne found that these sea cucumbers would eviscerate ON THEIR OWN-and would do so SEASONALLY!

Evisceration would apparently begin in September and continue through November. Of the populations she sampled -76% at one site and 49% at another were eviscerated.

Regeneraton in these individuals can take about 2-4 weeks. Viscera were regrown in time for winter but apparently this "annual evisceration" event could vary from year to year...

Sometimes, parasites (usuallly certain kinds of snails) were associated with the evisceration-but for the most part, the regularity was often observed without parasites present.

Could Evisceration serve as a kind of "back up excretory purge?"
So, here's the thing-sea cucumbers, like most echinoderms directly lack a way to excrete wastes. They are essentially open to seawater the way starfish, sea urchin, and other echinoderms are..

So, the intestines in Eupentacta will often build up metabolic waste and associated "wear and tear" type chemicals. Byrne speculated that a regular evisceration could conveniently and economically "excrete" or purge these chemicals (along with the intestine and other viscera).

AND do it regularly!!

4. And how does Regeneration Fit into all of this?
The part of this process that has the MOST interest from the rest of the scientific community is actually the second, more understated part of the evisceration process.

That is to say, it was not the expulsion of the viscera but the REGROWTH of those guts and organs!! Sometimes in a surprisingly short period of time.

Regeneration time in sea cucumbers apparently varies on which organs were lost and in what species..Regrowth time varied from 7 to 145 days!! Yes, that means that at the shorter end of the range, there were some species for which regeneration of an organ could take as little as a WEEK!

How amazing is sea cucumber regeneration? One study of a sea cucumber called Leptosynapta crassipatina found that a simple disk of tissue containing part of the calcareous oral ring, the nerve ring, and the mouth could regenerate the COMPLETE animal!!

The physiology of regeneration is complicated-but essentially, lost parts form from either the "re-differentiation and remodeling of exisitng tissues" or from having a generalized "a mass of undifferentiated, proliferating cells that forms at the wound site, eventually giving rise to the regenerated structure".

I've often thought of this as a great example of how something that started out as essentially a neat story in the Natural History of Marine Invertebrates has evolved into research that likely has the broadest implications and with an unforseen but likely important impact!

That said-next week, MORE on SEA CUCUMBER DEFENSE!!
Posted by ChrisM at 6:44 PM

This is such a coincidence as I was going to ask you about Sea Cucumbers! I was eating in a Chinese restaurant in Dubai (blog post to follow) where I saw plates of sea cucumbers in varying colours and size to be prepared into a stir fry before your eyes! Have you ever eaten one?

I've eaten sea cucumber on many occasions. The species I've tried have a very subtle taste that tends to convey the flavor of the sauce. There is a substantive gelatinous texture to it which is what most people seem to remember most.

Sea cucumber harvests are becoming a conservation issue-so at this point I would enjoy with some restraint and caution..

how can they turn into liquid? anyway i am about to make a thesis ... i want to try what you said here if a sea cucumber really can regenerate when cut into two... i really am amazed ... anyway thanks for the info

Please note what I said Marlyn. They do NOT regenerate if cut into two. Only partiallly.

Also, the bodies do not turn into liquid, they liquify. that is the texture becomes very, very soft.

I had hoped to see a photo of an eviscerating sea cucumber, but the hand drawn BOOM! drawings far exceeded my hopes!