We look at the sea urchin Tetrapygus niger in response to the two starfish predators! The blog today is from a new paper (2012) by Juan Diego Urriago, John Himmelman, and Carlos Gaymer in Marine Ecology Progress Series 444: 85-95. 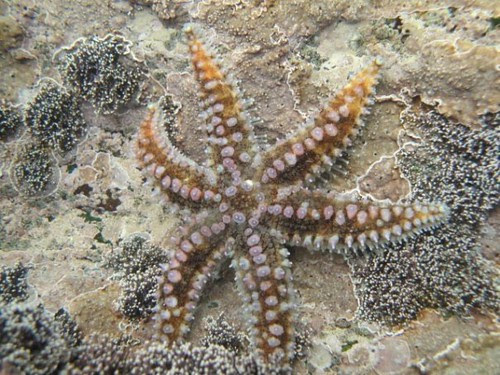 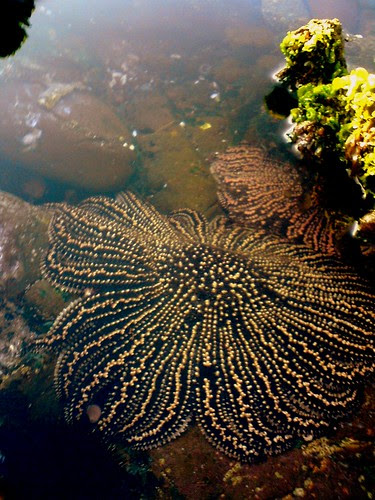 So, let's get right to it!
Basically the sea urchin T. niger was observed in surprisingly high abundance living on elevated rock surfaces.

So, tops of boulders, rocks and so on..especially relative to the two aforementioned well-known sea star predators H. helianthus and M. gelatinosus. Their Figure 1 shows the proportion of overall "high surfaces" were covered by sea urchins relative to their predators.. 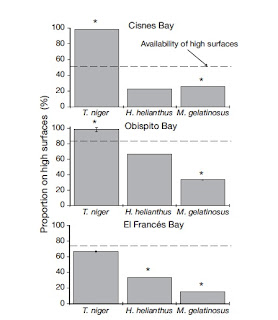 The reason for this unusual difference in the location of sea urchins vs. sea stars. Why do so many sea urchins live on elevated rockfaces???   This cartoon from Echinoblog Art Dept. explains it best!

Predatory starfish approaches up the cliff face!  Sea urchins can SMELL predators approaching based on the odor of the predator brought up via water currents.  They SENSE that something bad is coming... 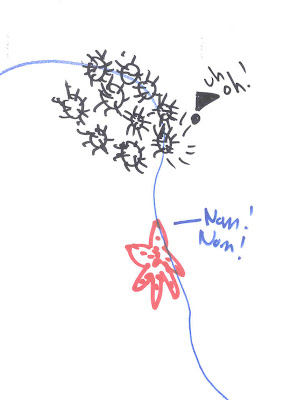 The urchins are trying to prevent THIS from happening!!!!
Here we have some T. niger amidst some yummy kelp on a vertical (presumably elevated) rockface...
When it becomes clear that the starfish is out for some good sea urchin eatin or when it just starts to ATTACK! (i.e. the predator is in direct or close contact) the urchins DETATCH from the rock face and let the gravity do the rest!!!

In other words they JUMP For it!! Drop and ROLL!
(note that the Echinoblog Art Dept. reconstruction below is somewhat exaggerated..) 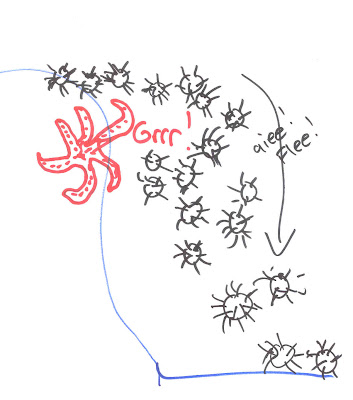 This immediately removes the threat of the oncoming predator and puts a pretty solid distance between the predator and the prey!

The starfish is of course, unable to just "release" its tube feet since they are more flattened in shape and holding on with their bottom surface!

Here is the graph (their Figure 3A) that shows an experiment that showed how many sea urchin detatchments occurred when they artificially motivated the sea urchins to detatch in reaction to predators and parallel control actions. 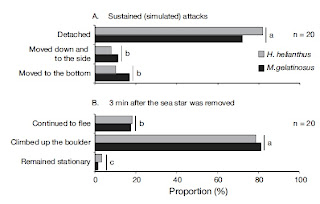 Thus, the "jump" response happened only in reaction to direct contact with predators and not simply the "smell" of them approaching

Figure 3B (above) shows what happened after contact but without detachment. Their behavioral cue was to proceed higher up the boulder.

Its worth noting that Just because the urchins would "fall" did not guarantee their overall survival or even escape. Spines or other structures could break. And if an urchin falls upside down and a starfish happens to be there? Yikes! 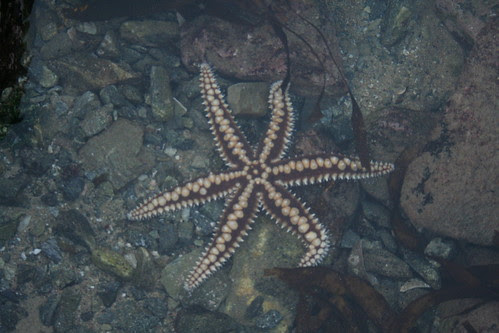 One interesting observation by the authors was that owing to the overfishing of various fish predators, there may be an increase in the overall abundance of sea urchins. This in turn may have led to the "importance" of these starfish as predators in the observed ecosystem.

People often wonder why little natural history stories like this are important?  This gives us some perspective on the importance of how removing fish can conceivably cascade into something more.

There were MANY different invertebrate taxa that were shown to interact with those sea urchins. Understanding even a small segment of the interaction might be important to understanding how changes in the ecology have shifted their community structure..
Posted by ChrisM at 11:17 PM

The heat getting to you Chris?

Thanks! Always great to know I am getting it right!