What are the FASTEST known Starfish??

What is the FASTEST known starfish??
People are always interested in the upper limits of our world. The biggest! The smallest! The most dangerous!

Where echinoderms are concerned, I've tried to answer a few of these. The biggest starfish can be found here.    The largest brittle stars found here.

But people always seem a little surprised when they see something like a starfish in motion! Most times, starfish move slowly if at all and so if people see one being the lamborginhi of echinoderms, it generally provokes some curiosity...

So, this week a new open access paper by E.M. Montgomery and A.R. Palmer in the Biological Bulletin looks at locomotion in the bat star, Patiria miniata but provides a very handy dandy comparison of movement rates in several well-known sea star species (the paper itself we shall discuss another day....).

Why should we care?? Doesn't this all seem like kind of an...odd thing to know? Indeed. But rate of movement is actually an important bit of information in understanding feeding biology, ecology, and food webs. How fast do the predators go compared to their prey?  How far could an adult travel on its own and disperse its gametes in a discrete amount of time?   So, yeah. Its worthwhile...

It should be noted that most of the rates outlined below are based on a clip motivated by predators. So, its not necessarily clear what their "average cruising speed" would be..


Here's a breakdown of speeds in starfish in milimeters per second!

Honorable Mentions:
I should just say that while these seem reasonable-it seems like there are faster species out there. These  just seem to be well-known and as more information becomes available there's likely to be starfishes that put these guys to shame...

Astropecten aranaceus and others.  Speed: 2.5 (error+/-0.8)
Astropecten is the "proper" sand star. They occur on unconsolidated sand/sediments where they sit and wait, buried until prey comes along. They occur in shallow-water, tropical to temperate water habitats all over the world.

There are many species..many of which are deceptively fast...Here is a nice video of A. aranaceus which is found primarily in European waters..

But here is Astropecten polyacanthus from the tropical Indo-Pacific. Look at that thing go!


Asterias forbesi and Asterias rubens (Asteriidae). Speed: 2.0 mm/s and 3.3 mm/s
These two species are the most commonly encountered in the North Atlantic-so on the east coast of the United States and in Europe. These are the classically known "starfish prey on a bivalve" type of starfish that you see in the intertidal.

Here's video from Massachusetts showing Asterias moving around at a decent but relatively slow clip..

Oreaster reticulatus (Oreasteridae).  Speed: 3.3 mm/s
This species is the well-known "cushion star" found in the tropical Atlantic-Gulf of Mexico, Bahamas, etc. Its primarily an opportunistic omnivore feeding on algae and other organics present on the bottoms.

This was honestly kind of a surprise. On the spectrum of starfish that are known for speed-this one isn't one of them. But the original account observed them in undisturbed, natural settings, so perhaps there is some bias on my part... 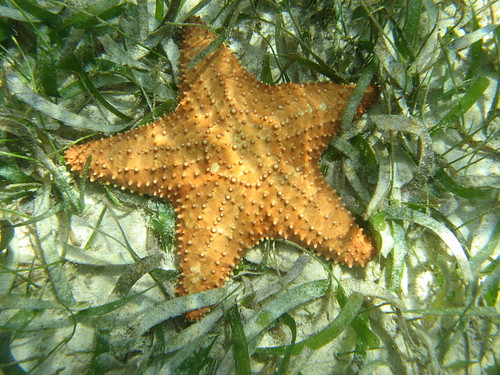 TOP FIVE FASTEST KNOWN Starfish!
Of the known movement rates listed in Montgomery and Palmer's paper these were the 5 highest with embellishment from what I've seen etc.  Bear in mind this is 5 of the best known species, out of nearly 1900 different species-so..there's possibly (probably) faster or at least, comparably fast taxa out there....

5. Protoreaster nodosus (Oreasteridae). Speed: 4.6 mm/s (deviation +/- 1.2)
This is the well-known "Chocolate Chip Starfish" that occurs in the tropical Indo-Pacific. This species  is often encountered in the aquarium and tropical tourist trade. It is related to the "Cushion star" O. reticulatus above..and similarly, feeds on microalgae and lives on loose, sandy bottoms.

The video doesn't show them at their quickest but its something..

4. Acanthaster planci (Acanthasteridae). Speed: 8.3 mm/s (deviation +/-2.5)
This is the infamous Crown of Thorns Starfish which occurs throughout the tropical Indo-Pacific from Hawaii and Baja California all the way to the east coast of Africa in the Indian Ocean. Its a large, fast, coral eating predator..

No wonder it moves so quickly...

3. Archaster typicus (Archasteridae). Speed: 12.7 mm/s (deviation +/- 5.4)  Here's one that a lot of people probably don't realize.  This is the "fake Astropecten". I outlined a blog awhile bag about how to distinguish it from "proper" Astropecten here.

Archaster is parallel/convergent with Astropecten (below) but live in a similar habitat buried or semi-buried in loose sediment/gravel...There's a nice account of biology here by my friends at Wild Singapore..


2. Pycnopodia helianthoides (Asteriidae). Speed: 20.4 mm/s
Pycnopodia is found only on the west coast of the United States from Alaska to southern California. Its a big animal-up to about 2-3 feet in diameter.

Its a big animal and boasts 15,000 tube feet on its 20-30 arms. Its a feared and voracious predator on mollusks, sea urchins and other invertebrates, which can actually smell it coming and will move out of the way when they do...

It has THE reputation for being the fastest starfish known.. but as we shall see, this is not the case... 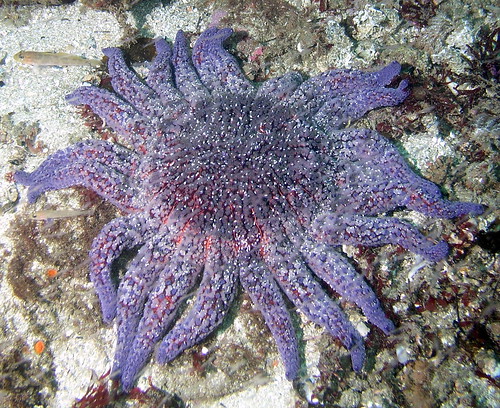 here's some footage of this formidable species in motion!


1. Luidia ciliaris and friends (Luidiidae). Speed: 50 mm/s !!
Luidia is a genus of "sand star" that lives in tropical to temperate, usually shallow sandy habitats all over the world. They are predators that feed on mollusks, sea urchins and other invertebrates.

L. ciliaris occurs in the North Atlantic around Europe-the UK and so thereabouts.. 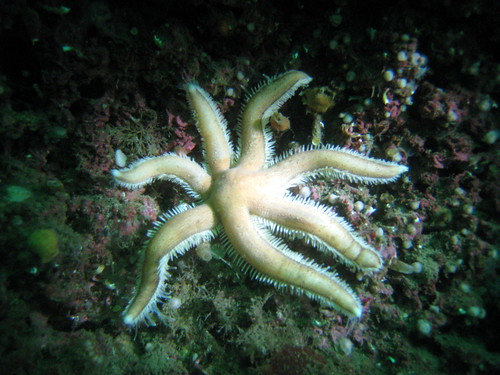 So, not what you thought! Pycnopodia has gotten the reputation as the "fastest starfish" in the world.
But NOT so! It would seem that Luidia spp. overall seem to be among the fastest of sea stars with a rate of movement just short of twice as fast as Pycnopodia!

Diver and photographer Neil McDaniel (who has contributed to the Echinoblog before) has graciously tested movement rates and found that under duress  Luidia foliolata is about 25% faster than Pycnopodia. Luidia foliolata travels at a rate of about 46 mm/sec vs. about 35 mm/sec in Pycnopodia.

Perhaps something to do with living primarily on sandy sediments??

But why talk when I can show you...
Here's Luidia maculata from Lembeh (Indonesia).  Note however, that this one has some commensal crabs that seem to be in on the action..

Even the 5-armed species are pretty light on their tube feet... Luidia clathrata from Isle of Palms, South Carolina..

Starfish from paul zoeller on Vimeo.

Thanks to Neil McDaniel for his contribution to this account!
Posted by ChrisM at 12:04 AM

Wow, those comparison so great. Sir, what's the metodology to measure the seastar speed?

The methodology for the bat stars is listed in the open access paper which is linked in the post. The others likely have heterogeneous methods given they are gathered over the course of several years.

Is this a function of substrate types too? I mean, sand and mud are unconsolidated and sea stars that are adapted to it don't even have to cling for dear life, unlike most of those that live on hard substrates (esp. those that live in high-current/wave action zones).

That said, Pycnopodia and Asterias are exceptions.

Claire,
Indeed so! There are different kinds of tube feet and different kinds of functional adaptations. And as I said in the blog, there's actually a huge undersampling here. Most of the animals featured are probably present because they are familiar and easy to observe.

MANY more factors-environment, functional morphology and even phylogenetic constraints are likely at play. GREAT question!

Thanks, "asterias" (ChrisM ?), for giving its proper name to my philipino starfish on Yutube. I'm only an "autodidacte naturalist".
I discover your site. So many things I have to learn from here !

yes. that was me. glad to have helped and happy that you find my blog useful!

How fast are brittle stars compared to these starfish?

Its generally harder to measure two different taxa for speed. Starfish have a coordinated tube foot wave motion vs. brittle stars which mainly scuttle across the bottom. I would say that brittle stars are slower on the whole though.