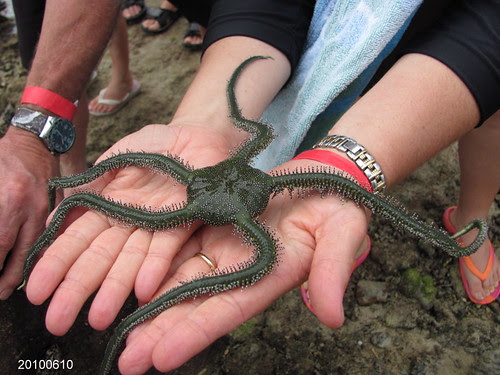 (photo by David Witherall)
Happy 4th of July! Some neat video for you guys this week!

So remember from a few years ago I wrote this post about the giant, green predatory ophiuroid Ophiarachna incrassata. Here's the post from 2008 where I outline O. incrassata's remarkable predatory behavior when feeding on fish!

Now in 2011 we have some video that shows some similar feeding in what looks to be a different species of Ophiarachna!

Caveat! These are aquarium observations. Animals in captivity don't necessarily eat what they would eat in the wild. But there remains some insight into watching them feed...

Here we see a light colored Ophiarachna (does not look like the green O. incrassata) apparently attacking a tiny porcellain crab identifed by the videographer as Actaeodes tomentosus

Here's a couple of nice ones showing Ophiarachna feeding on some fish and showing some rather dramatic disk deformation!


Here's a nice one of O. incrassata. Note at 0:58-59 after feeding- the disk shows the food deforming the top surface of the disk creating that weird "tent" sticking out of it..

Feeding a Green Brittle Star from Carlito on Vimeo.

I'd say the videos are quite unnerving. Somehow it reminds me of those 50s monster flicks, both from the looks of the creature itself and the perspective in which the videos were shot.

If they catch active preys such as fish and crabs, how do they subdue them? Other predators such as jellyfish and cephalopods use quick-acting toxins, do they have to rely from something else? Does the jaw morphology show modifications for predatory lifestyle?

Heya!
The "How" is usually via ambush by trapping them with the arms and crushing them in a spiral. As here:

No one has ever really studied how the jaw is modified for different life modes but they do differ across taxa with differing methods of feeding..

Wait, wait, does it mean they rip apart their preys like people using those flexible saws to cut wood?

I'm surprised that there are no sci-fi film directors picking up on this.

From what I've read/seen the arms coil around prey and depending on circumstances-those prey get pulled apart.

there's LOTS of things that Hollywood doesn't pick up on. Their loss I guess. :-)

I got this video of a sunflower star trying to eat a wolf eel:

in the end the diver tried to help the eel out from the star's embrace.