Deep-Sea Swimming Sea Cucumbers and the "most bizarre holothurian species in existence"! 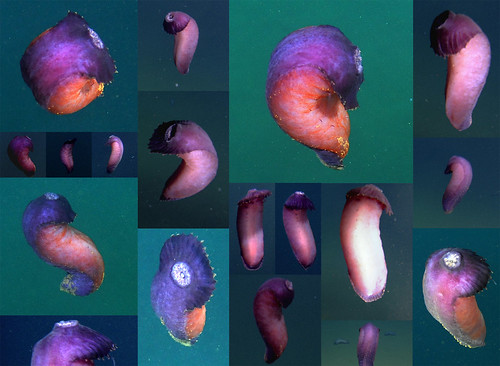 (image by Neptune Canada!)
This week! Everyone has seen them but what do we actually KNOW about SWIMMING sea cucumbers?? Let's find out!

Sea cucumbers are the very wormiest looking of echinoderms. In one sense-they resemble giant earthworms, in that they digest organic particles from the sediment which they pick up with their feeding "arms" which places food into their mouth.
They eat and they poop. The organics are processed through their intestine and left as "clean" castings via the other end. They live mostly on sea bottoms.

Sea cucumbers of course, do many neat things such as expell their gus as a defense and provide habitat for fish!  and they are ecologically important. 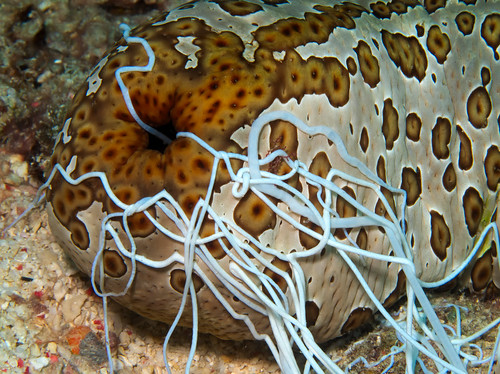 But in the deep-sea, sea cucumbers become the oddest of the odd!!

You have probably seen them around the internet..such as this Enypniastes which has "made the rounds" from awhile back 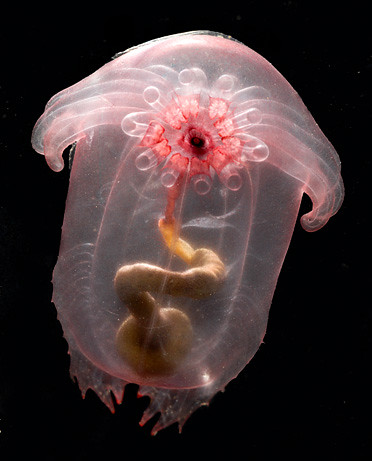 We actually know some stuff about the biology of these animals and I asked myself last week "WHY have I never written these up before??"  So, LET's GO!  Data for this paper is actually available for download from the Smithsonian Digital Repository: Miller & Pawson, 1990 in the Smithsonian Contributions to the Marine Sciences # 35!   Plus other citations as mentioned below.

Dave Pawson was gracious to help provide info for the first three points..

1. There are Different KINDS of Swimming Behavior!
Facultative aka The Cuke CAN swim but only in an emergency!  It turns out that most sea cucumbers are capable of some kind of swimming behavior but most only do so as an "extreme" response to predators.

For example, this shallow water North Pacific sea cucumber Parastichopus can undulate its body and move out of the way when it senses the predatory sunflower star (Pycnopodia) in close proximity.


Benthopelagic
So, the word "benthos" refers to the bottom and "pelagios" refers to the watery 3-D space that exists above it which makes up most of the ocean. Some animals (not just sea cucumbers) actually live a life that places them somewhere in between the two.. Hence the name.. "bentho-pelagic."

It turns out that MANY species of "swimming" sea cucumber only spend PART of their life actually swimming. You can see this in this video.. It lands and takes off again..

A paper by the Japanese deep-sea biologist Suguru Ohta (which you can download here) studied the deep-sea swimming sea cucumber Enypniastes in Japan. 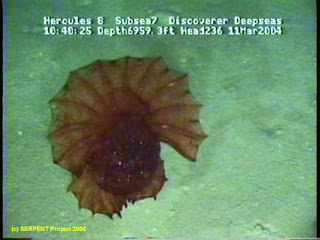 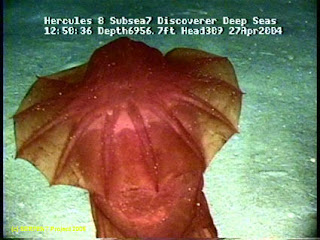 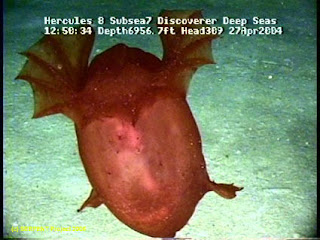 At a recent scientific gathering, it was noted that upon "take off" Enypniastes will Poop!

..the ubiquitous swimmer Enypniastes eximia always swims down to the bottom to load up its intestine with delicious mud (and it feeds very rapidly for a sea cucumber, stuffing handfuls of sediment into its mouth as if there's no tomorrow), and then it swims away with a full intestine.

An image presented below shows this behavior as the animal has "landed". You can see the feeding tentacles which gather fine flaky organic matter called "marine snow" and put it into its mouth.
An aside: sea cucumbers such as this weird fellow called Psychropotes mostly "facultative"-they can swim... but need a good reason to as adults.
BUT apparently as juveniles (as shown below) they are benthopelagic and CAN swim. Is that what that big weird "lobe" is for??  Still kind of a mystery.. This image below is from a paper by Dave Billett at Southampton Oceanographic Cener and colleagues in this paper

Potentially, this shows that behavior can be complex and related to things like growth. 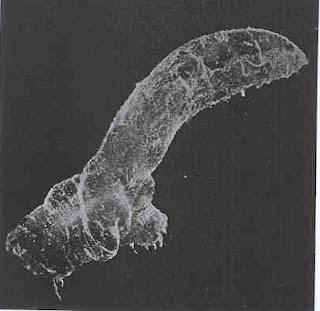 TRULY PELAGIC
So far we've only seen sea cucumbers that swim but are not actually pelagic.. that is, they do not LIVE in the three dimensional space of the ocean like a jellyfish.

but there is ONE species which DOES SWIM ALL the time. In other words a TRUE swimming sea cucumber.  Let me introduce you to Pelagothuria natatrix.  Miller and Pawson describe this species as "...perhaps the most bizarre holothurian species in existence."

and yes.. it does have that Lovecraftian/Elder Thing-Mountains of Madness vibe going on doesn't it??
Why? Here are some drawings of the animal. The mouth and feeding arms face "upwards" and are recognizable but they sit at the center of a jellyfish-like veil on strongly gelatinous body.

Diagrams below are scanned from the description of Ludwig, 1894 on the University of Washington Freshwater and Marine Digital bank. Total length of these animals is about 16 centimeters (so about 6 inches long) 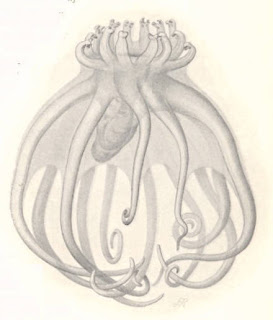 Here is the veil extended. Mouth facing upward... That veil/umbrella? seems to be formed from the tube feet or podia modified into this swimming apparatus.

More detail on the mouth with the feeding arms shown in a radiating pattern around the mouth.. 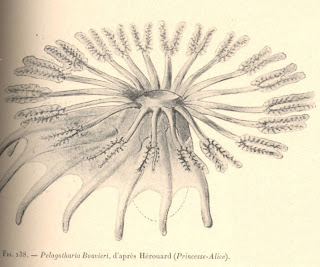 and more detail on the feeding arms at center and the tentacle-like veil around it. Miller and Pawson report that its food apparently consists of pelagic food sources: organic particles in the water, pelagic snail shells and other small floating debris. 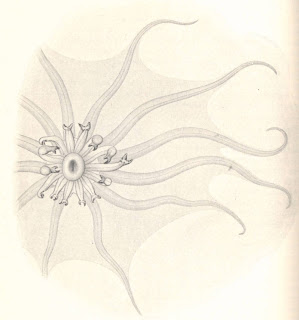 Pelagothuria is known primarily from the deeps of the Atlantic, Pacific and Indian Ocean between 596 to 6776 meters.

Here are pictures from Miller and Pawson's monograph which show some of the few images of the animal alive.

Realize that a sea cucumber that is ACTING LIKE A JELLYFISH is pretty frakkin' WEIRD even for an echinoderm.

Most deep-sea swimming cukes belong to the families Pelagothuriidae, Elpidiide, Psychropotidae, and the Synallactidae with the adaptations for swimming seemingly haven arisen in the evolution of sea cucumbers at different times in their history.

4. What else is there about swimming sea cucumbers that you aren't telling me??
At least a couple species glow in the dark!  Enypniastes is thought to use its bioluminescence to scare off potential predators. See this paper for more..

How much is known about the purely pelagic species?

Other than some video observations from various submersibles and museum specimens, there's very little known.