BEFORE....
A recent alert went out from ophiuroid biologist at the Los Angeles County Museum- Dr. Gordon Hendler that a six-rayed brittle star from the Indo-Pacific has invaded the Atlantic!

A pdf account of this from Coral Reefs can be downloaded here.

Invasive species are those which are artificially introduced into regions where they are not native. Their presence can directly or indirectly have significant to dire consequences on the ecology of a particular region.

Ophiothela is a clonal, six-armed brittle star that typically occurs in the Indo-Pacific as seen here (species shown is Ophiothela danae).  Photo by Wild Singapore. 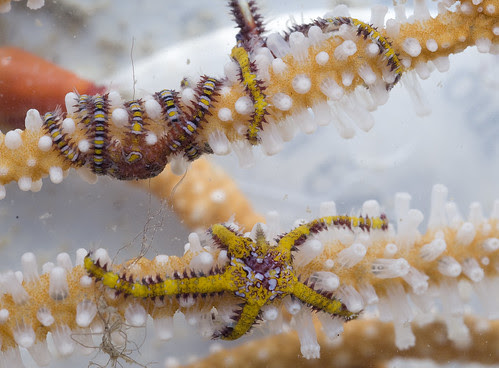 Wild Singapore has a great page on these (note that not all of these seem to be Ophiothela however)
go here to see it!

But Ophiothela mirabilis seems to have invaded Brazil and St. Vincent as reported above. The species was first observed in Brazil of 2000 and has been observed slowly spreading throughout Brazil and the Caribbean.

This brittle star is asexual, specifically it is fissiparous and so it clones itself, thus facilitating its spread. Unlike other tiny commensal brittle stars, this one seems to have "low host specificity" which means that it can live on just about anything that it is compatible with (as seen below) from gorgonians to sponges..

Courtesy of the Brazillian website Cifonauta here is one of several videos of this invasive species in Brazil! They have several more pictures of this species also...

Can Crowd-Sourcing Help???
A quick look on Flickr indeed shows Ophiothela mirabilis as observed on Polymastia janeirensis (a sponge) from João Fernandes Beach - Buzios - RJ - Brazil (image from August 16, 2009). O. mirabilis is the tiny little orange thing clinging on below... 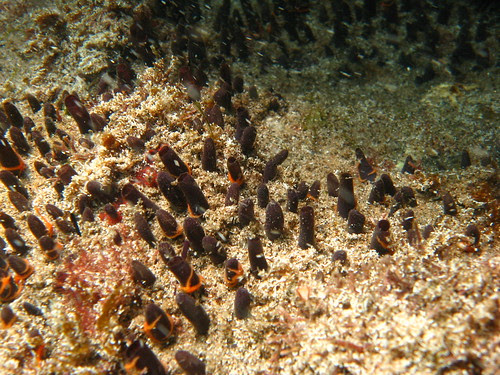 The many eyes and cameras of the internet permit greater powers of tracking and observation of this species!  Got one from the Atlantic?  Post links to pics in the comments! Or contact me (or Dr. Hendler) for more info!
Posted by ChrisM at 12:19 PM

But how did it even began?

The evolutionary history of these animals is poorly known.

Also we use to take lots of underwater pictures of marine life. If you wish check my facebook albuns.


Hello, I found it to Brazil, Armação dos Búzios, isla Ancora, 2017 05 22, 20 m. You can watch the picture on my site :https://nomadica.jimdo.com/echinodermes/ophiures/ophiothela-mirabilis/