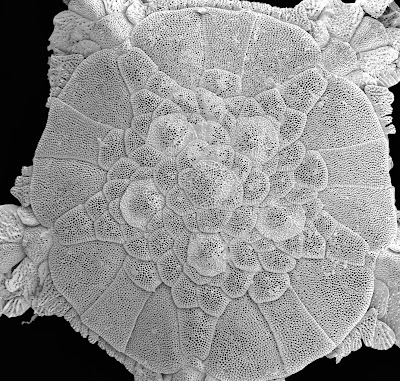 This week..I am still catching up from the Echinoderm meeting in Brussels, Belgium but as luck would have it my colleague and brittle star researcher Sabine Stöhr at the Swedish Museum of Natural History was generous enough to share some images from her new paper "Brittle Stars from Seamounts in the Andaman Sea (Indian Ocean); first account with descriptions of new species" co-authored with Sabyasachi Sautya and Baban Ingole from the National Institute of Oceanography in Goa, India. The link to this paper is here. in the Journal of the Marine Biological Association of the United Kingdom.

Stöhr and her colleagues describe brittle stars collected from seamounts in the Indian Ocean (the Andaman Back-Arc basin), which for anyone in this business-is pretty exotic.

Brittle stars have never been collected from Indian Ocean seamounts and so there is ever the potential for new and interesting species! (or at least further encounters with known ones!)

Six species were identified, including this weird little fellow.. Astrophiura, a species close to Astrophiura tiki. (from 517-671 meters deep).

These are odd little (disk diameter= 6.4 millimeters!) brittle stars that are superficially similar to some deep-sea starfish, such as caymanostellids. I've  shown both these starfish and Astrophiura on the Echinoblog before (here).
Note the oral surface in the lower picture?  See those 2 paired ball-like things between each radius? Those are gonads! How many times do you get to see that in an ophiuroid??  Its not every day I'll tell ya' that!

Pics below show the top surface of the disk which is quite small (2 to 5 millimeter diameter!) 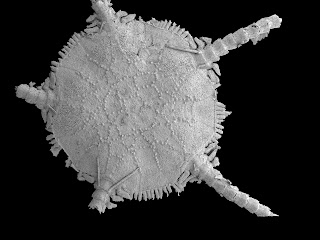 For you folks who like to know where scientific names come from- Do ya' see those long spines coming off the arm bases?  Illustrated below..   THAT is where the species "longispinum" which is latin for "Long Spine" comes from...
Sabine and her colleagues use a Scanning Electron Microscope (aka an SEM) to show a variety of features, including useful skeletal morphology such as the individual arm skeleton (called the arm vertebrae) such as this one to help diagnose this new species..
Another new species, included this one:  Ophiophyllum minimum was described.  The species "minimum" was named for the very small size of this species (about 1-2.5 millimeters in diameter!)..   shown here via Scanning Electron Microscope...
We often miss a LOT of details when we aren't paying attention to small critters.  That's why the SEM can be so useful. They bring an almost surreal quality to the level of detail present!

Here is a series of close ups of the disk on this species... 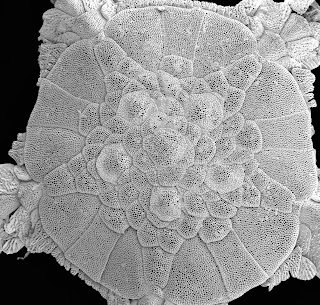 and closer!!   The primary disk plates are arranged in a stunning pattern.. 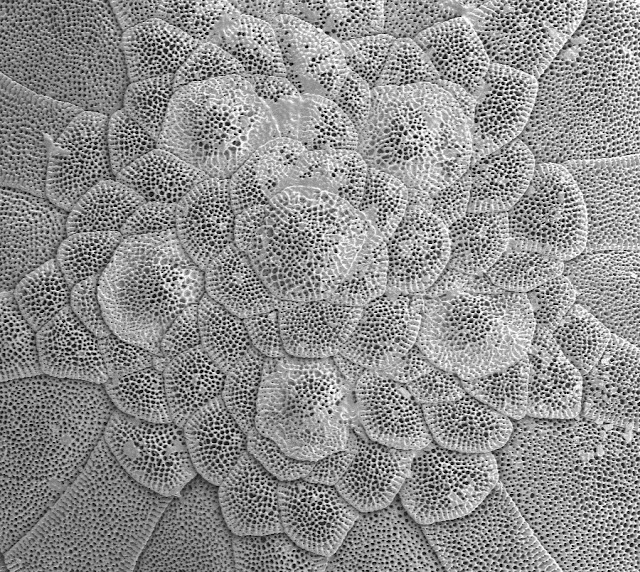 
Stay tuned and hopefully we will be able to present more from echinoderms collected from the Indo-Pacific deeps!
Posted by ChrisM at 10:19 PM