URCHIN BARRENS! Aka the Trouble with Tribbles (=sea urchins!) Post!

Sea urchins are among the best known, most heavily published on, and most "important" of echinoderms. People eat them and they are studied in marine ecology pretty heavily. Most marine biologists I know think highly of sea urchins. They're pleasant animals with an unusual appearance

But the truth is, no matter how adorable or fuzzy, useful and/or cute an animal may be, TOO many of them is nothing but trouble! True for Star Trek tribbles and for sea urchins!
(disclaimer: Tribbles are science fiction, sea urchins are not)


What are Sea Urchin Barrens??  These are places where a sea urchin species' abundance increases dramatically to the point where the urchin devours EVERYTHING in its path, effectively leaving all else 'barren' except for more hungry sea urchins. 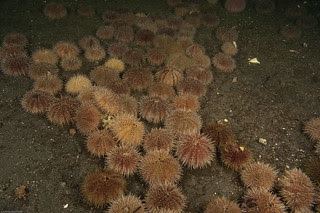 This is not far removed from the imagined "ecology" of Star Trek's tribbles (A good essay applying real population math about tribble populations can be found here, but this image from the famous ST:TOS episode hopefully gives you the general idea!)
The gist of it is simple:  TOO MANY URCHINS and they EAT TOO MUCH. But unlike tribbles (which were eradicated by Klingons-yes I know they're not real), in the case of sea urchins, we can actively study the ecological interactions and conditions which have caused the populations to explode in number.
Here is a video showing tons and tons of Red Urchins (S. franciscanus) on a barren in Southern California. Thee bottom is essentially devoid of all but more hungry urchins!

What causes urchin barrens?
Um. Its complicated but the common thread seems to be that there is an association between barrens and the absence of sea urchin predators.

In many of the papers I've read about Northern Hemisphere species, the loss of a major sea urchin predator seems to be one of the immediate attributed causes of the runaway population growth, but as we've seen with other species such as the Crown of Thorns (Acanthaster planci) the story is often complicated....

Most of the studies involve temperate-cold water urchins in the Strongylocentrotidae, specifically Strongylocentrotus purpuratus (purple urchin), S. franciscanus (red urchin), S. droebachiensis (green urchin) and S. polyacanthus.  Literature was abundant, but this paper by Nathan Stewart & Brenda Konar provided much of (but not all) the info for this post.

In one of the most familiar studies from the Pacific Northwest coast, the main predators were sea otters (in many cases, I assume Enhydra lutris-some papers did not mention species).

The fundamental ideas outline the notion that as sea otter populations decline, predation pressure decreases and with nothing to keep the populations at a controlled level sea urchin populations dramatically increase and began to devour kelp (and really everything else!)  to the extent that they effectively clear the bottom.
In Stewart & Konar's paper, individuals from these population explosion urchins were compared against "healthy" urchins which occurred naturally in kelp forest habitats.  Some dynamics:
Different species of Strongylocentrotus (as well as other urchin species!) live in different places and have different predators!

On the North Atlantic coast, there is a similar population explosion of the Green Urchin, Strongylocentrotus droebachiensis, which from the look of it, is pretty severe

I have briefly written about the impact of this many Green Sea Urchins. They all POOP! This actually has a pretty serious ecological impact.

Some, such as this paper, have proposed that these population increases have been caused by the loss of lobsters (Homarus americanus) which feed on green sea urchins. But in all liklihood, as the system is better understood the more complicated the explanation.
Other predators, such as wolf eels and starfish, also feed on green sea urchins and well.. it can get messier...

Now, in the Southern Hemisphere we have a similar, parallel situation with a completely different family and species of sea urchin: Centrostephanus rodgersii (Diadematidae).
Climate Change Enters the Picture!
A paper by Ling et al. 2009, in the distinguished Proceedings of the National Academy details  a scenario with some important dynamics

Its important to note how significant the human factor has played into these dynamics. Climate change and overfishing are thought to be the primary agents responsible for urchin "barrens" in these circumstances.

This issue has been conveniently summarized in this video...


The takeaway lesson: Predator loss seems pretty strongly associated with urchin "barrens" aka population explosions. But all sorts of environmental factors, including warmer waters, and multiple predator interactions can be important..

So we have a LOT of sea urchins. Couldn't we uh..just eat them?

BUT, you can after all, only fish so much. After you've taken the lobsters, the urchins and the kelp what else have you got left? A good answer seems to lie with good sustainable fisheries management..but we shall see how this works out...
Posted by ChrisM at 11:27 PM

And then there's the CRAZY behavior of white urchins on barrens as documented by Coyer et al. 1987. That always blows me away.

D'OH! I KNEW I saw that somewhere! I was looking for that other predation paper last week. Now I gots it! thank you!