Who Eats Who? Figuring out Feeding in Deep-Sea Starfish

People are always fascinated by how animals eat and, I think, the weirder the better. Starfish have one of the most distinctive feeding modes of all animals and I think, that's why people get fixated on how they consume their prey.

The feeding posts on the Echinoblog are among the top ten highest hit and the research literature is full of comprehensive studies detailing the feeding ecology and behavior of a great many starfish species.

As one might expect, the great majority of feeding studies were initially those of shallow-water species which were easy to observe. Feeding is important to understanding marine ecology in many systems. So, its not just some casual trivia that comes in handy at cocktail parties.

But what about deep-sea species? Understanding the role of predators in these often inaccessible systems is important.  In cases, such as with deep-sea coral, its important to understand what role these animals play, especially given how little we know about the individual animal's importance.

How does one figure out the role..and indeed, the importance of these species in such far away and forboding habitats??

Today's Echinoblog post features work by Ms. Katie Gale at Memorial University who resides in the lab of Annie Mercier (and including Jean-Francois Hamel).

Data from this paper was recently published in the new issue of Deep-Sea Research studying the trophic biology of various deep-sea asteroids from the coast of eastern Canada. (here).

but also had some feeding notes on this weird guy.. Tremaster mirabilis! (about which very little is known)

Most of these species occur in a primary range of about 500 to 1500 meters, but some can get relatively shallow. Most are difficult to study and live on the deep-dark sea bottoms...

2. Figuring out feeding
There's generally TWO ways to study feeding:
In the old, old days, figuring out the feeding ecology of deep-sea species was difficult. Specimens were collected via net-and usually brought up badly damaged. The animals were mostly dead and had often emptied all of their gut and stomach contents. Rarely did you have an opportunity to see the animal interacting with any possible prey items. Any interactions you might have spied could have been caused by the trawl net scooping up any and all of the bottom fauna...

Direct Observation  So, the most obvious and direct way to observe feeding is by watching it!  These days, submersible robots aka ROV's (Remotely Operated Vehicles) are one of the main platforms for these types of observations. I've done some similar work in the Pacific (here)
This is Hippasteria phrygiana, a widely occurring cold-water/deep-sea coral (and cnidarian) predator, but Gale et al. observed several other species from the deeps, about 500-1100 meter depths,  of the North Atlantic.

Several species were observed as predators for the first time, whereas others were confirmed. For example, Novodinia is a brisingid with a documented suspension-feeding mode and we saw more of that in Gale et al. 2013. 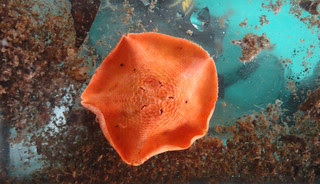 Predictably, Hippasteria fed on various cnidarians, including sea pens and other deep-sea cnidarians.
Whereas Ceramaster fed on sponges..

But not all the prey allow the predators to just...eat them. Some, like the sea anemone Hormathia

nodosa
and the deep-sea coral Flabellum alabastrum
used their tentacles (which all have stinging cells) as a defense against the oncoming hunger dogs!  And this was effective against the more timid Ceramaster but not against Hippasteria. Flabellum was fed upon by Hippasteria VERY quickly (in 18 minutes)..

Indirect Evidence. This is where some newer techniques shows us some cool ecological stuff!!

Stable Isotopes!!
Here is a video that explains the basics of stable isotopes but basically what it comes down to is this: elements like nitrogen (N) and carbon (C) undergo changes as they pass through different ecological levels in the environment.

In doing so, they become kind of like a "fingerprint" for a particular kind of ecological role. So, for example, species with a stable isotope N (Nitrogen) value of about 16, but w/ Carbon value of about -14 (Hippasteria, Ceramaster and Mediaster) are higher within the overall trophic relationship among these asteroid species.
You've seen Hippasteria, but here's Ceramaster granularis

Gut Contents & Prey Items!
One other indirect way of looking at food items?  Gut contents.  What were they eating?

Ms. Gale did a LOT of work looking through the guts of many starfishes.. Much of how they fed is based on detective work.  For example, many animals such as deep sea gorgonians and such, after being digested leave only skeletal bits called sclerites.

Fortunately, these can be used to identify the animals with some accuracy. Curiously Hippasteira also had some crustaceans in its gut..
One of the subject animals, Zoroaster fulgens has been one of the more mysterious deep-sea starfish species in my experience is an infaunal predator, that is, a species which eats animals living in bottom mud and sediments.  A related zoroasterid called Doraster is shown here with a snail in its mouth with snail food in the red circle 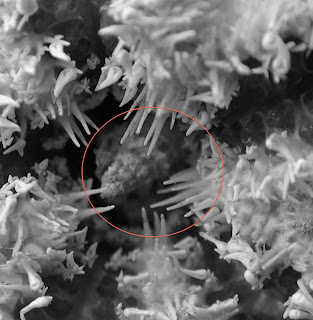 Gale et al reiterate the importance of the feeding ecology of many of these species...

I've recently discussed some recent observations of a seemingly innocuous species, Porania pulvillus as a predator rather than a passive ciliary feeder. Understanding deep-sea ecosystems is an exciting endeavor, who knows what we'll find!  Simple things like feeding are intriguing and interesting-but poorly known. What will the important impacts of these species be down the line?

But even BASIC knowledge such as this is a complex and time-intensive process. It starts with work like this...
Posted by ChrisM at 6:47 AM