Brittle Star Diversity! How many are there and where do they live?


Happy New Year! I'm slowly getting caught up with life and finally have time for something meaty!

So, first for 2014 an overview on brittle star (aka ophiuroid) diversity! How many? Where do they live? I wrote a parallel post for starfish last year. You can see it here.

As with the article on starfish, this one is based on a recent PLOS One paper which is freely available for download here.  It was written by the three TITANS of brittle stars! Sabine Stohr at the Swedish Museum, Tim O'Hara at the Victoria Museum in Melbourne Australia and Ben Thuy at the University of Göttingen, in Göttingen, Germany. The data from their paper is based on the World Ophiuroidea Database.

So, one quick bit of clarification. This article is about brittle stars aka ophiuroids. NOT starfish. Starfish are a different (albeit closely related) group of echinoderms. I provided a brief overview of how to tell apart brittle stars from starfish here.   Note however, that you'll often hear people refer to them as "brittle starfish" or some such thing. Nope. "brittle stars" is good and fine.

Note also that some common names refer to different KINDS of ophiuroids. "Brittle stars" tends to refer to the more conventional types of ophiuroids, such as the ones here and like those above.

On the other hand,  "basket stars" tend to be highly branched and with lots of fleshy arms. These sometimes also get called "serpent stars" if they have only 5 arms. 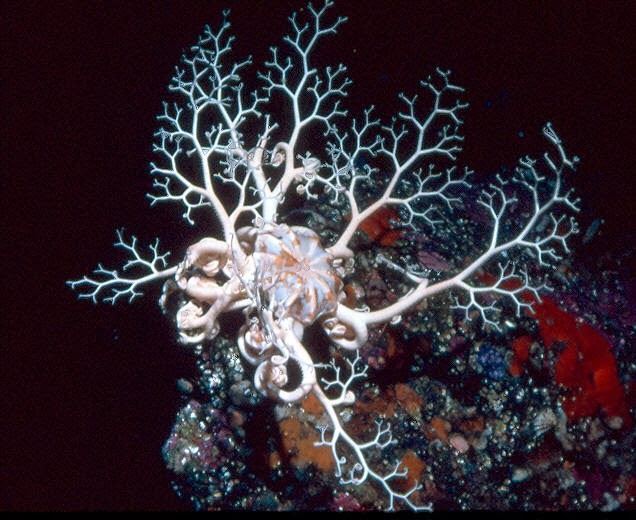 So terminology is pretty straight forward. Brittle stars AND Basket stars are BOTH different types of ophiuroids (technically.. members of the Class Ophiuroidea).

1. How many species of brittle stars are there?? 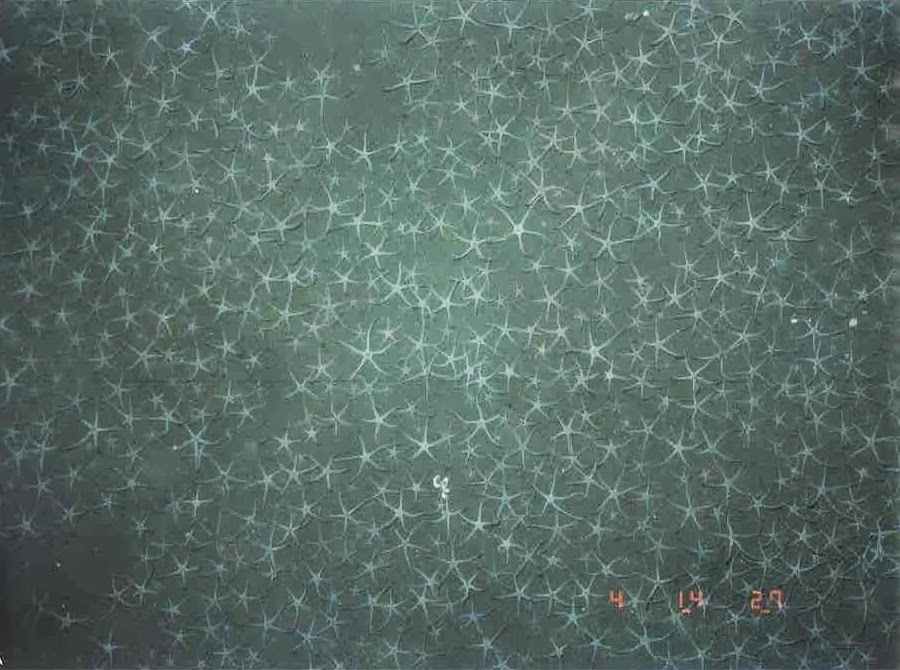 In terms of species, brittle stars are by far the MOST diverse of all the living echinoderms. Sea stars follow up in 2nd place (n=~1900 species), followed by the sea cucumbers (Holothuroidea, n=~1250), then sea urchins and sand dollars (n=~950 species) and finally, the living crinoids (n=~600 species).

This has never been a big surprise to invertebrate zoologists. Brittle stars live EVERYWHERE. Under rocks, in the mud, on corals, under corals.. even ON JELLYFISH.

Here is the table from Stohr et al's paper... 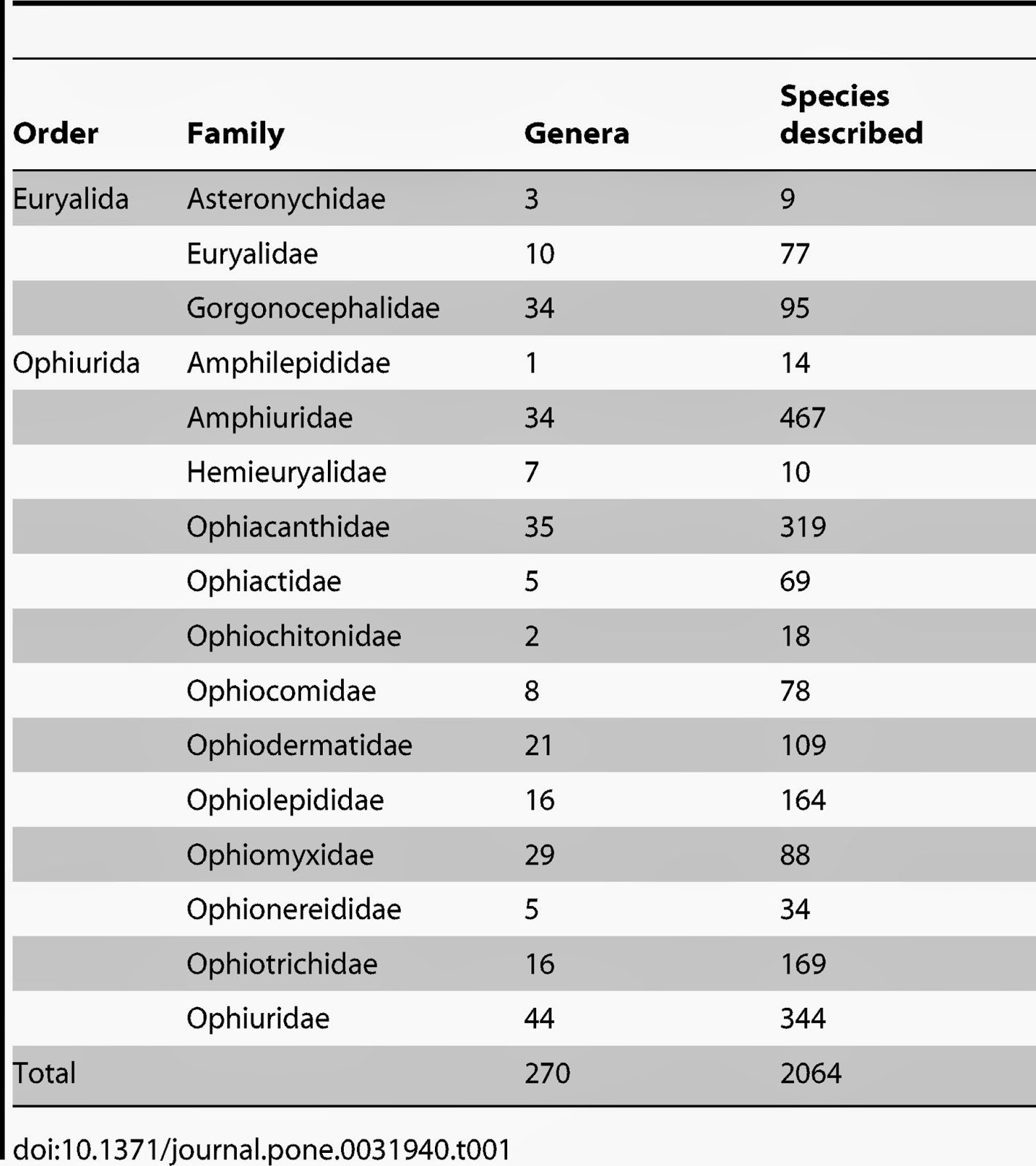 There are 270 genera in 16 different families. So, there's a fair diversity of body plans within the Ophiuroidea but not as much as say, in starfish (which have 370 genera broken up into 36 families). So the bulk of diversity in brittle stars appears to be at the species level. That sounds consistent with their apparent overall strategy of diversification into whatever habitat or niche seems to make itself available, given how many places on the marine bottoms they can be found. There's a high number of species that avails itself of ecological niches.

But more on that below...

3 Which groups of brittle stars are the most diverse??


The MOST diverse of brittle star families? The Amphiuridae! An example shown above, courtesy of the wonderous Arthur Anker!  As of 2013, there were 467 accepted species.

Amphiurids are burrowers and diggers. They find their way into mud, sand, any kind of loose sediment that they can shelter in and under. Once dug in, they throw their arms up through the sediment and out into the water to "fish" for organic particles and other food..  As shown here...


Although amphiurid brittle stars vary in size, many of them are tiny, tiny little critters that fit easily into cracks, crevices and nooks in rocks or other underwater habitat. They live EVERYWHERE.

And the 2nd place winnah??? The Ophiuridae, with 344 species 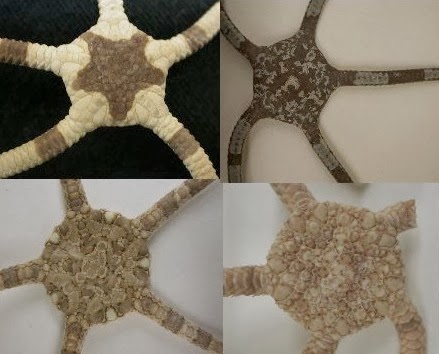 Ophiurids truly are diverse. They live in the deep-sea, in the shallow tropics, and in temperate waters. There's a LOT of them and often times they are very abundant, often comprising a HUGE amount of biomass where they are found.

We know a fair amount about them, but considering how MANY of them there are? WE probably don't know enough. For example, we didn't know until the 1990s that Ophiura (below) could display some rather vicious predatory behavior...

3. Where do brittle stars live? 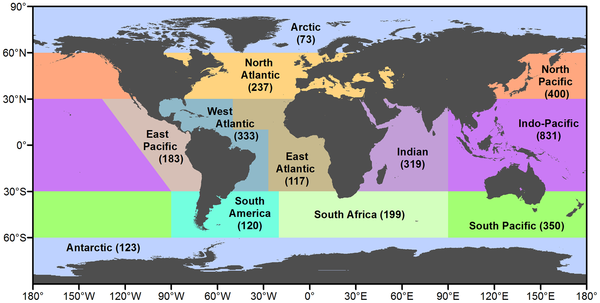 Stohr and colleagues have very nicely mapped out the number of species by different biogeographic zones around the world. Their breakdown as follows:

What's MOST interesting about these? When one looks at the species diversity by depth, the MOST diverse areas? the Indo-Pacific, South and North Pacific?  A significant amount, sometimes more than 50% of the diversity of these faunas is from the deep-sea (>200 meters!).

Tim O'Hara has been working on the zonation and patterns in deep-sea ophiuroids for quite awhile. Here is an example of some of his work...

5. How long have brittle stars been around??


Most sensible scientists would agree that ophiuroids and asteroids diverged at some point in the Paleozoic with modern-looking brittle stars appearing sometime in the mid to late Paleozoic, some 440-485 million years ago or so.  So, yes. Brittle stars have a very old lineage as do most echinoderms. Older than dinosaurs and certainly older than humans.

But most "good" fossils of brittle stars are largely observed in Mesozoic rocks. There are actually quite a lot of brittle star fossils out there but many of them were identified using pretty substandard taxonomy by geologists using out of date identification concepts (long story).. 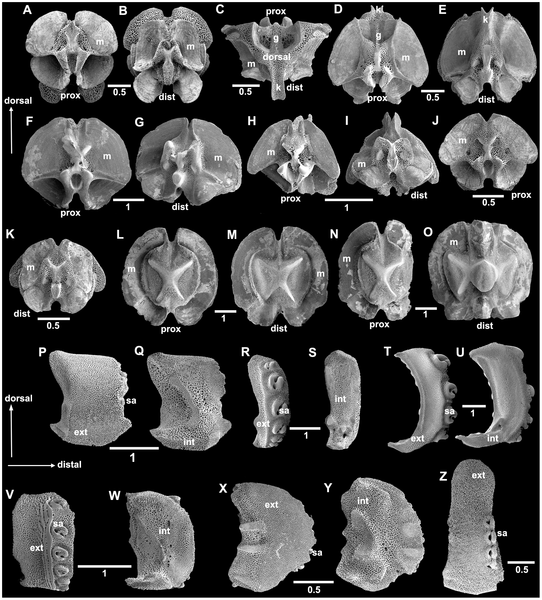 And so, long story short, only now are we actually assessing fossils and looking at their real significance in the history of marine invertebrates.

Author Ben Thuy for example, has been able to take the skeletal elements from living brittle stars and compare them with fossil skeletal elements, discovering the presence of deep-sea faunas in the Cretaceous and in younger rocks..

For people who appreciate brittle stars, we live in good times. We have three active brittle star workers, including that ever so rare beast... a brittle star paleontologist!   And we now even have a new Japanese worker who specializes on basket and serpent stars