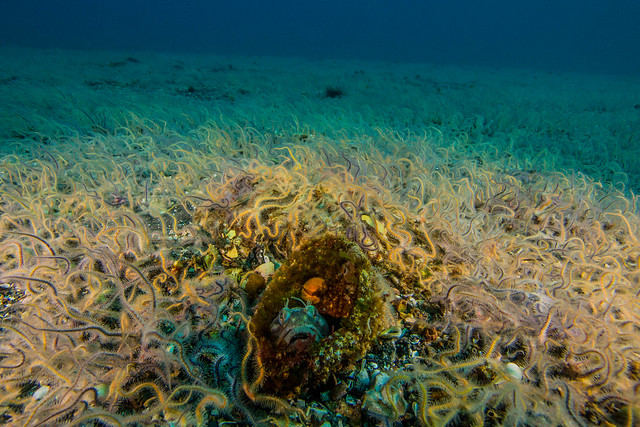 Brittle stars are EVERYWHERE. They are not only the most diverse (over 2000 species), but also the most ABUNDANT of echinoderms (go here for the full thing)

The truth is that they live frakkin' EVERYWHERE. The diversification of brittle stars is thought to have been successful mainly because they've found a niche just about anywhere and everywhere they can! They live in all the nooks and crannies on the marine bottoms: buried in sediment, rocks, sponges, corals so on and so forth..

Some Brittle stars live in some of the deepest places on earth down to >8,000 meter depths! (here)

But brittle stars also manage to find some pretty crazy, unusual and just downright SURPRISING places to live. Are there ANY habitats which which they cannot exploit???

Ophiuroids GO where other Echinoderms fear to tread! 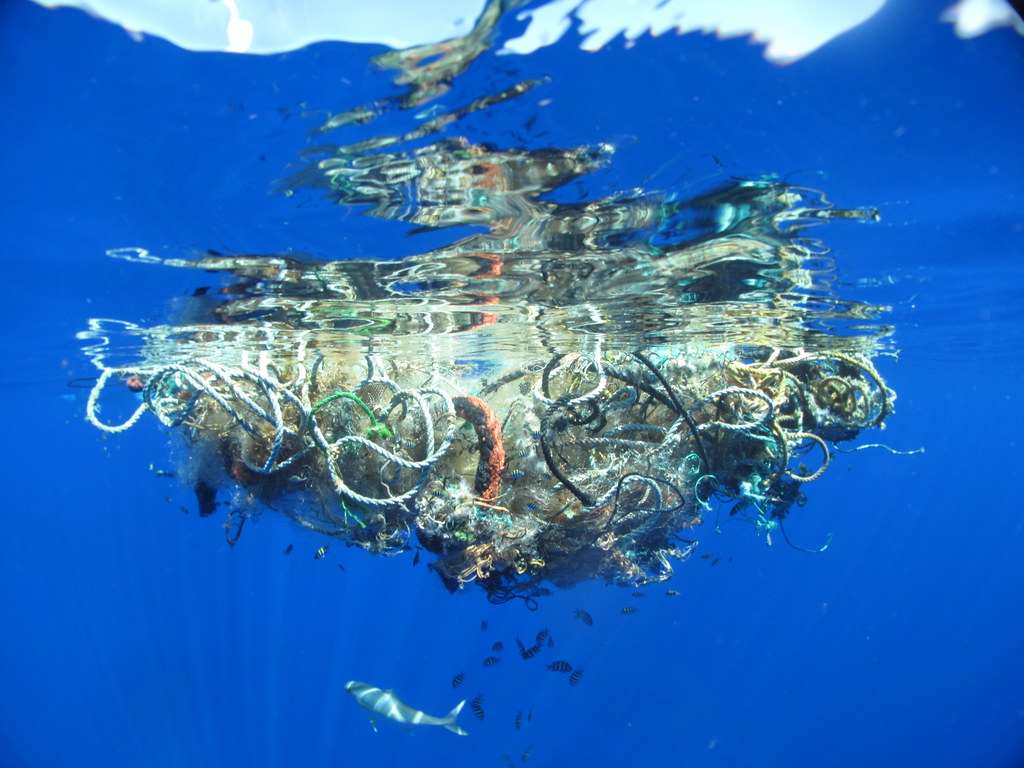 A recent paper by my colleague Miriam Goldstein et al. (2014) in Marine Biology has documented ophiuroids among the plastic garbage debris "islands" found in the North Pacific.  In this case, I'm told, there were hundreds among some of the ropes on these bundles... (my thanks to Miriam and her co-authors for the paper & sharing their info!)

Although garbage/debris is created by humans, it may functionally serve as just another venue for brittle stars to practice rafting, which is one means for animals that don't swim as adults, to be dispersed widely via ocean currents.

I've also written about the tiny, 6-rayed brittle star, Ophiactis which has likely been transported all around the world via human activity, probably like this and several other ways.....

2.  Jellyfish.
Speaking of one of those other ways?? I wrote about brittle stars "rafting via jellyfish" in one of my posts from 2009! (here)  But the short version is that some species are regularly found inside jellyfish for uh..... various possible reasons (go see the post to see the discussion why..)

another great pic of this can be found over here!
3. Hydrothermal Vents.
Here is ANOTHER place you generally don't expect to find echinoderms. Why? Because most of the environment around hydrothermal vents is not just, very, VERY hot but also filled with toxic chemicals, such as hydrogen sulfide.
Given how sensitive most echinoderms are to having clean, seawater these factors probably exclude most other echinos from being present in these poisonous areas. and YET somehow brittle stars have found a living here.

Observe Ophiolamina eprae from the East Pacific Rise. And there are actually about three others that live in and around vent settings...

This species actually looks like it lives directly in the path of some of the hot water and toxic materials...
4. Brackish Water (i.e., nearly fresh water)
Echinoderms are exclusively marine and they don't handle shifts in the amount of salinity in the water well. Some echinoderms, such as sea stars will often die from a significant drop in ocean salinity from say, a big rainstorm.

But some brittle stars? Brittle stars are probably the toughest of the echinoderms with some species, such as the above Ophiophragmus filograneus (Amphiuridae) can withstand up to 7.7 ‰ (or ppt-parts per thousand).

Another species in the Amphiuridae, Amphipholis squamata has been recorded as withstanding salinity as low as 5 ‰ !!
In the salinity battle, brittle stars are tough, little bastards.

5. Crinoids!
Here's one species, Ophiomaza chaotica a strikingly black and white species which famously lives on feather stars! A short write up on it at Wild Singapore here. 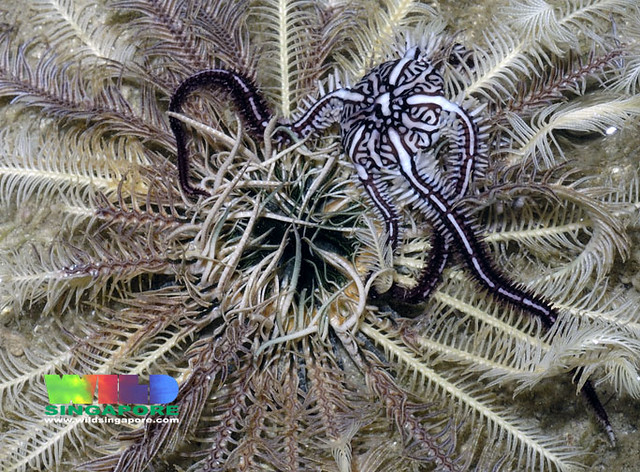 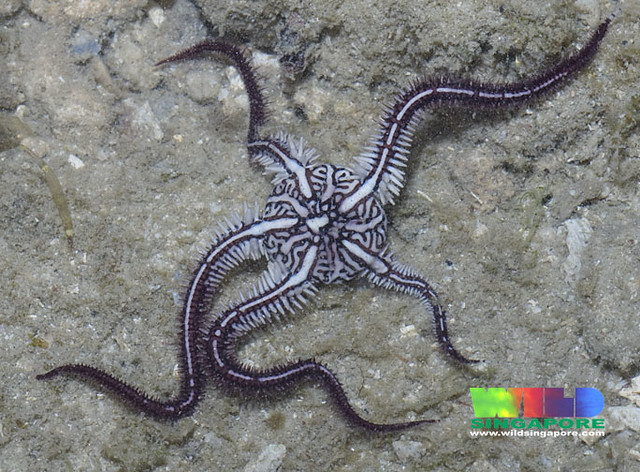 BONUS!
and I found this pic of a tiny striped brittle star living on Ophiomastix annulosa  Another example of commensalism?? Maybe one just incidentally crawling on the other? It wasn't actually clear and unfortunatley I couldn't actually find a record Ophiomastix-on-Ophiomastix action..so for now a mystery... 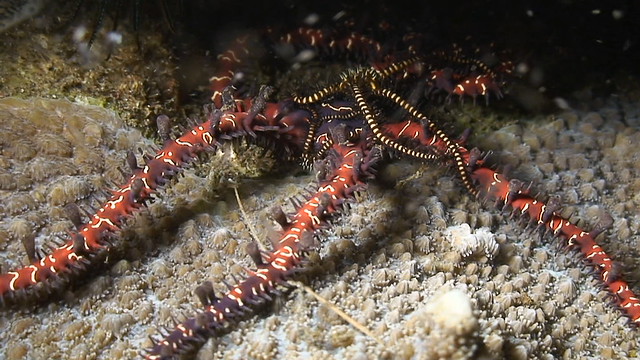 There ARE some accounts of brittle stars living symbiotically on other brittle stars but for various reasons, those are the subject of a future post!

UPDATE:  Should also have mentioned that brittle stars live on that other extreme deep-sea habitat-WOOD. But that's a story for another day...