Let's Meet the Deep-Sea Stars of the North Atlantic Canyons! Your Guide to Starfishy Okeanos Exploring! 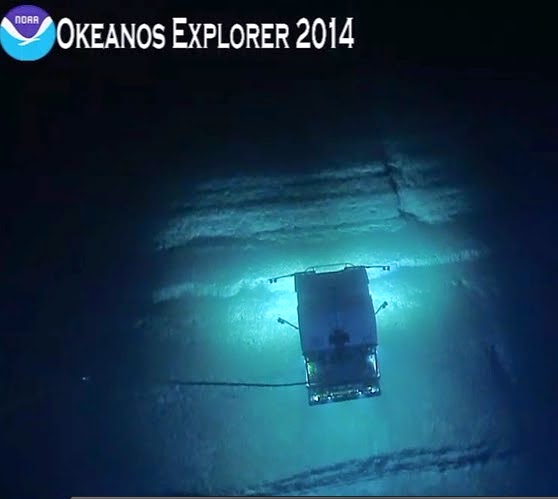 Owing to a fantastic combination of various technologies: deep-sea subersibles, HD cameras, quick and efficient internet transmission and the wonder of social media, not only do we have LIVE streams of deep-sea biology and exploration via the R/V Okeanos Explorer, BUT we have for the ability for almost ANYONE to tune and watch discoveries as they happen! AND watching and observing the scientists making these discoveries as they happen!

Thanks to Twitter and even a special Facebook Group that takes screengrabs of things seen by the ROV we now have a unique circumstance:  Exploration of the deep-sea being seen by everyone!! and not just scientists!!

But, the starfish you encounter on these dives are not exactly common place. Starting to learn about them first entails knowing which ones are which! Not an easy task given how poorly known how some of these species are. Some of these have never been seen alive! And that's where I come in.

And so as my BIG GIFT to people (scientists AND non-scientists) who are following the Okeanos Explorer  2014 LIVE deep-sea feed, here is a gallery/field guide of deep-sea starfishes observed along the North Atlantic east coast!!

To be clear, this list of starfish species that is known from the deep-sea Atlantic region (>1000 m in this case) is likely INCOMPLETE.. It is biased by what I've been able to identify and the limits of the known science of each species. So, yes we WILL still probably see things that are not on this post. And eventually, these things will see publication...as many are new records.

A caveat about use: This is mainly for use in the North Atlantic along the east coast of North America. Some of the genera (e.g., Novodinia, Hymenaster, Pteraster) occur world wide so you'll see them in deep-sea pictures in many places. Some, such as Porania pulvillus may also occur in very shallow water, which is unusual. But you can' t necessarily expect to find all of these species in say, Hawaii or even the nearby Gulf of Mexico.  Where species occur is often a funny thing in biology, likely dependent on a number of factors that make those places suitable for a specific species.

My thanks in advance to Dr. Chris Kellogg (@DrChrisKellogg ), Carina M. Gsottbauer (@CarinaDSLR) AND the members of the Facebook Underwater Screengrab Group for their diligence!

1. Tremaster mirabilis (Asterinidae)
Here's an animal we don't know much about. Go here to see more of what this species looks like. It occurs widely in the Atlantic, the South Pacific, the Indian Ocean, the Antarctic in fairly deep water. Video images from OE were the first time that I'd ever seen this species alive. Its been imaged alive in tropical Pacific but never quite this nicely... 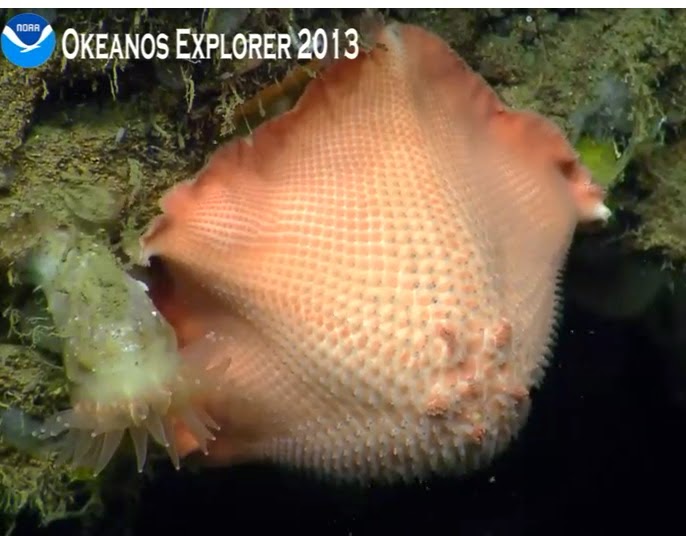 2. Chondraster grandis (I think). (Poraniidae)
We don't know much about this. Someone collected it and named in back in 1878 but we really don't have any info about its biology. Its living color wasn't even really known until recently.

The body form in these is very unusual. Very soft and has kind of the texture of a mango.

Which brings us to this mystery. Same animal... I think?  But TWO colors?? Is one a new species? Or could the body color simply be variation??  This is where collected specimens permit us to examine the body and perhaps extract DNA to study the possibility that there could be separate species being seen... 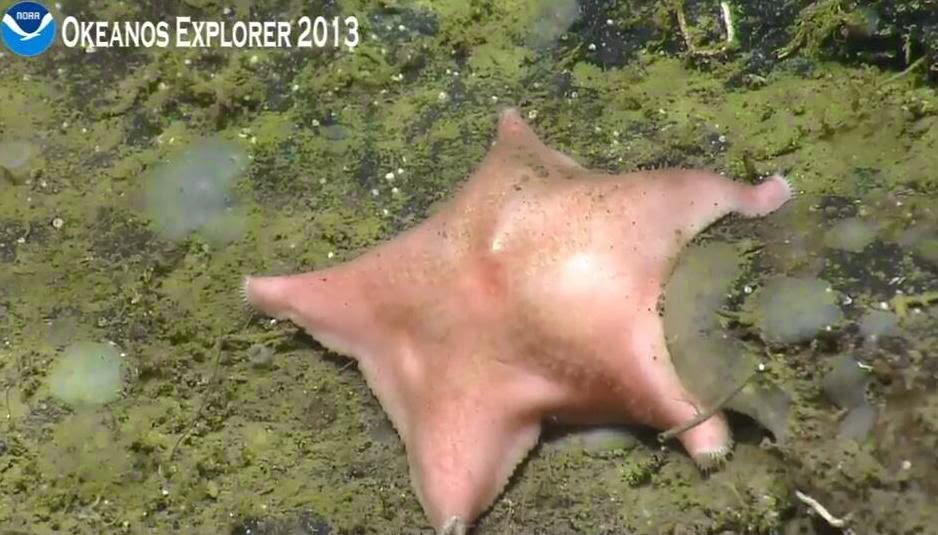 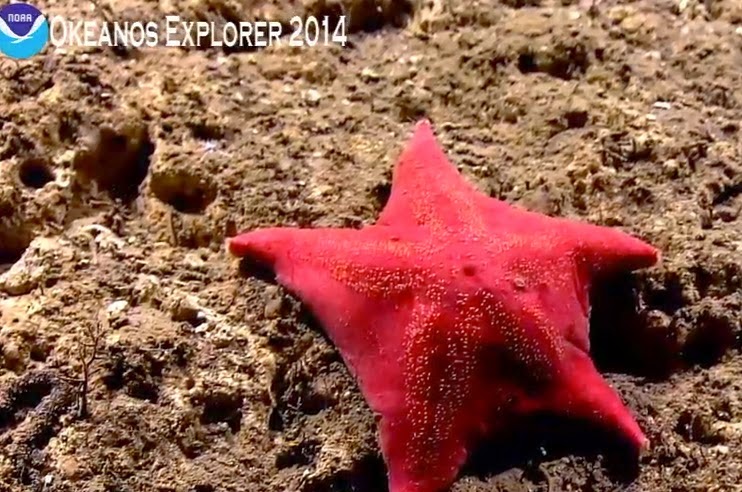 3. Porania pulvillus (Poraniidae)
I have previously written about this species from shallower water, feeding on various cnidarians based on crowd-sourced images!   Whereas once thought of as a fairly passively feeding species, new observations now suggest its a bit more of a predator than had previously been thought.

The white patterns show the papulae (or gills) as well as folds in the skin of the body. The entire body is overlain by a kind of thick tissue which makes it soft. So, like Chondraster grandis, this species also feels kind of like a mango if you touch it. 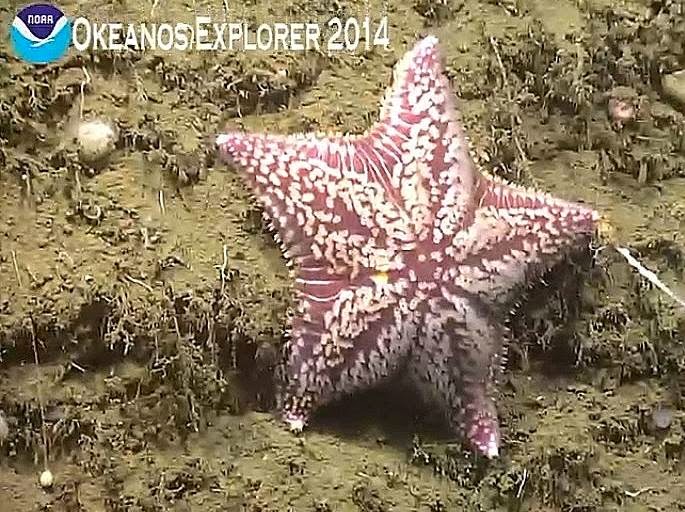 Interestingly, here is a shallow-water individual (from Norway) of what I think is the SAME species for comparison. Similar pattern but different color!  Based on the museum specimens, morphologically, these are nearly indistinguishable. but does this indicate a separate species??

4. Neomorphaster forcipatus (Stichasteridae)
This is by FAR one of the most commonly encountered species during the Okeanos Explorer expeditions.

We don't know much about the actual biology of this species. We don't know anything about how/what it eats or what/how it reproduces or even anything about its ecology.  The genus Neomorphaster also occurs in the eastern Atlantic in the deeps off Europe.

These are deep-sea members of what is mostly a Southern Hemisphere group, the Stichasteridae.
Stichasterids are a basal group within the  Forcipulatacea (i.e., an early branching within the evolutionary history of the group), a large group of starfishes which also includes the common starfish Asterias as well as the brisingids and 6 rayed starfish below. A post about their family tree is here. 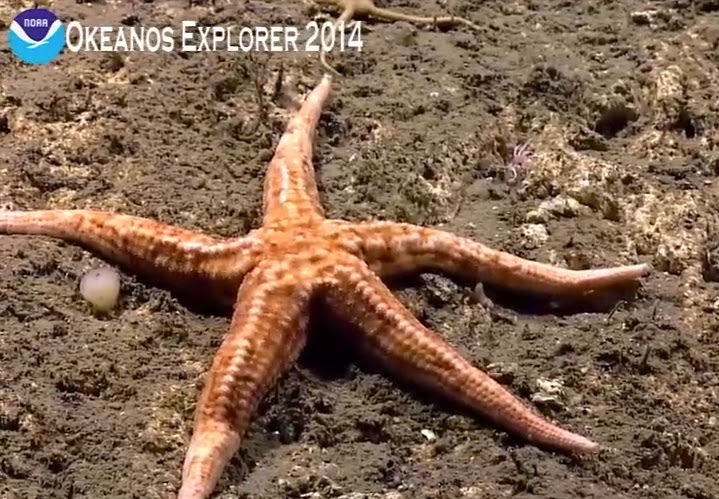 5. 6-armed starfish? Ampheraster? or Unknown Asteriid/pedicellasterid?
This one is kind of a mystery. It could be several possible genera or species. The names probably mean nothing to most people. But basically, this is likely a distant relative of Asterias. But we've not collected one. So uncertainty remains. It could be new! Or it could be known. I briefly discussed this in an earlier Okeanos post here.

6. Novodinia americana? (Brisingidae)
BRISINGIDS!  My favorite critters! These are actually starfish which use tiny little wrench-like structures called pedicellariae to capture food as water currents  carry it through their arms. Sort of like velcro. See my full article on brisingids here.

Brisingids are notoriously difficult, if not impossible, to identify from pictures. Usually, you can't because the features used to identify it need to be studied under a microscope.

Fortunately,  Novodinia has a large swollen arm region around the disk with very thick spines as you can see below.. 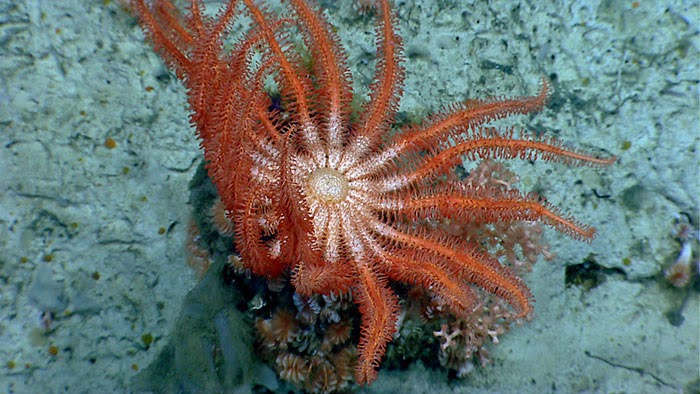 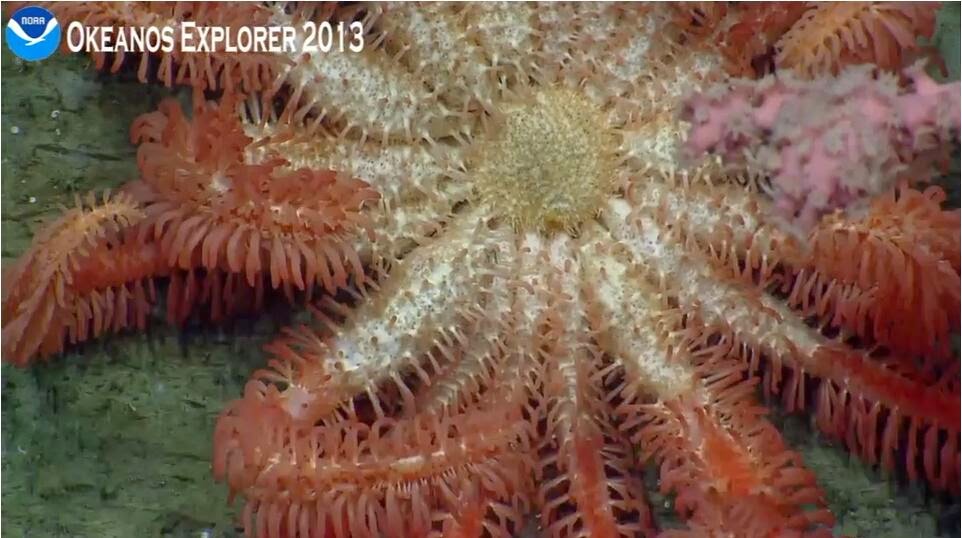 7. "Brisingid" Not sure which...
BUT after you get past Novodinia, the identifications of different brisingid sea stars becomes pretty difficult since none of the diagnostic features are visible from pictures..There are MANY encountered in these deep-sea habitats and probably several species which are not easily registered from pictures.

But they remain striking members of the deep-sea community.. Go here to see more of this 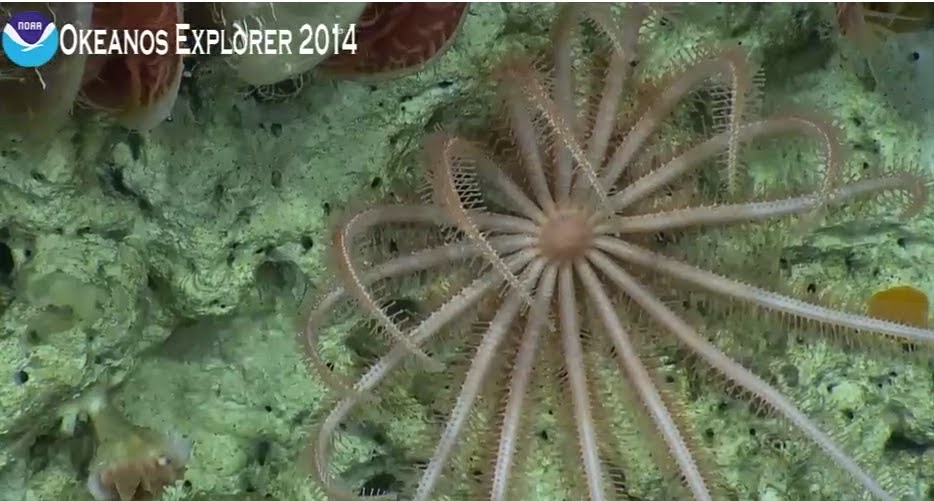 8. Evoplosoma sp. (Goniasteridae)
Evoplosoma!  A deep-sea octocoral predator! Often seen feeding on various bamboo "corals" (i.e. members of the Isididae). I wrote at some length about these here.  There's several species of this genus in this region and its difficult to make the call on these from pictures. 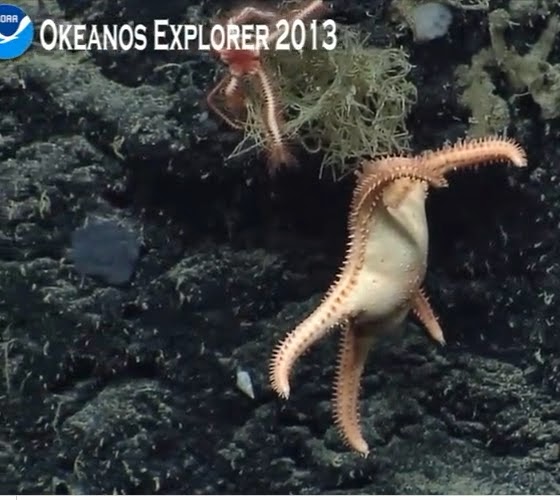 From one of the recent dives:  you see all those bare branches on this bamboo coral?? That's Evoplosoma chowing down on the "meat" of the coral... Its not unusual to see them climbing high up into the branches of such a colony..

9. Ceramaster granularis? (Goniasteridae)
A so-called "cookie star" This species might be the shallower-water C. granularis or maybe something else?  Likely, feeding on encrusing organisms or the "goo" on the substrate but we really don't know. 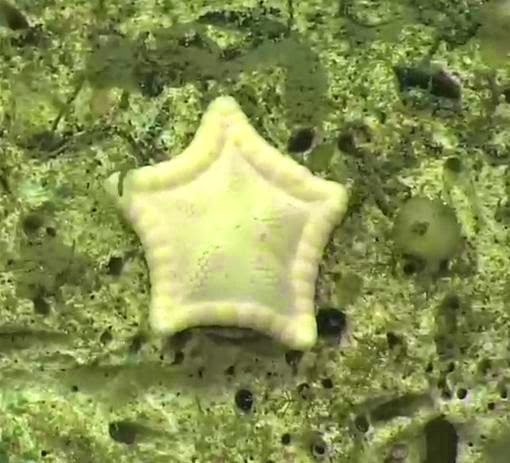 10. Pythonaster, probably  P. atlantidis
This was a RARE one. Barely known from 2 or 3 specimens, this is probably one of the FIRST living pictures of this species ever taken! We know NOTHING about its biology.

I wrote about it in more detail here.  Let's hope we see another one in the next few weeks! 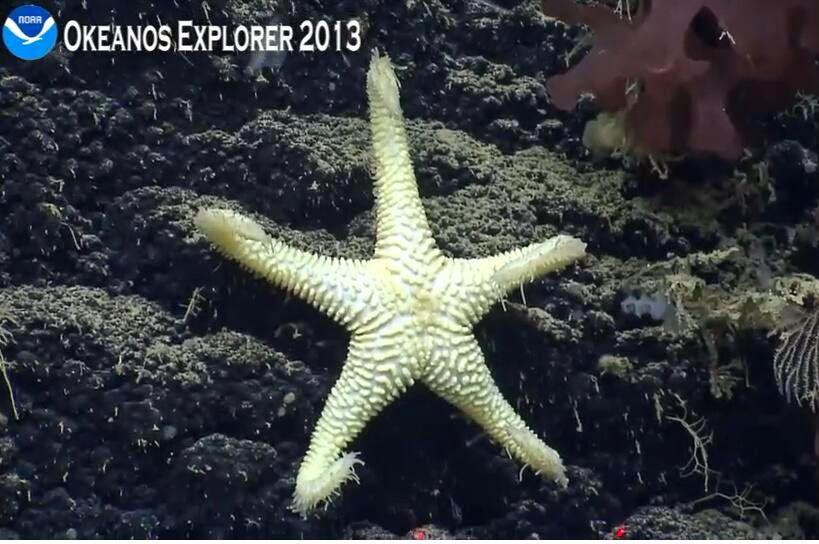 11. Peribolaster or ??
Another rarely encountered species. Haven't even quite figured out what this one is yet. But it has what looks to be an osculum, i.e., an opening on the central disk to allow water onto the body surface.

What is an osculum?? Look to the links on pterasterids below.... 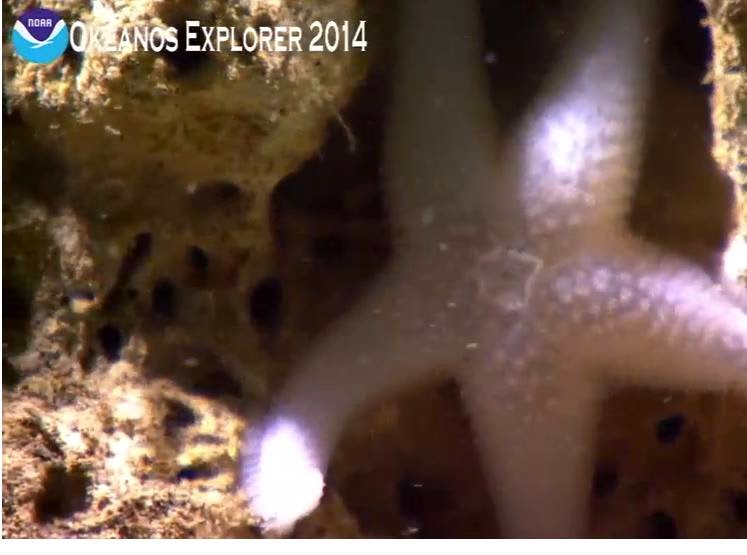 12. Hymenaster? (probably)
This genus of sea star, is widespread around the world's oceans. Another poorly known group of animals..but with a very distinctive appearance and the ability to produce mucus as a defense mechanism! Go here to see more on this.. 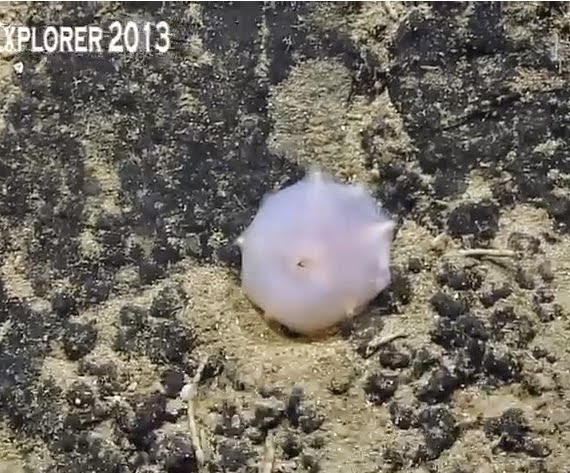 13. Pteraster sp.
The other genus of "slime star" with shallow and deep-water members. The link about slime stars is here.. Note the osculum.. the opening that allows water in and shoots mucus out! 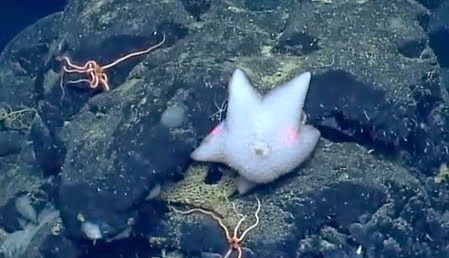 14. Lophaster?
Wasn't sure what this one was for certain. But it has spines along the surface that suggests a widespread cold-water group. We'll have to keep our eyes open for more of these...

If this IS Lophaster, then it would be the 5-rayed relative to Solaster, the sun star (below... ) 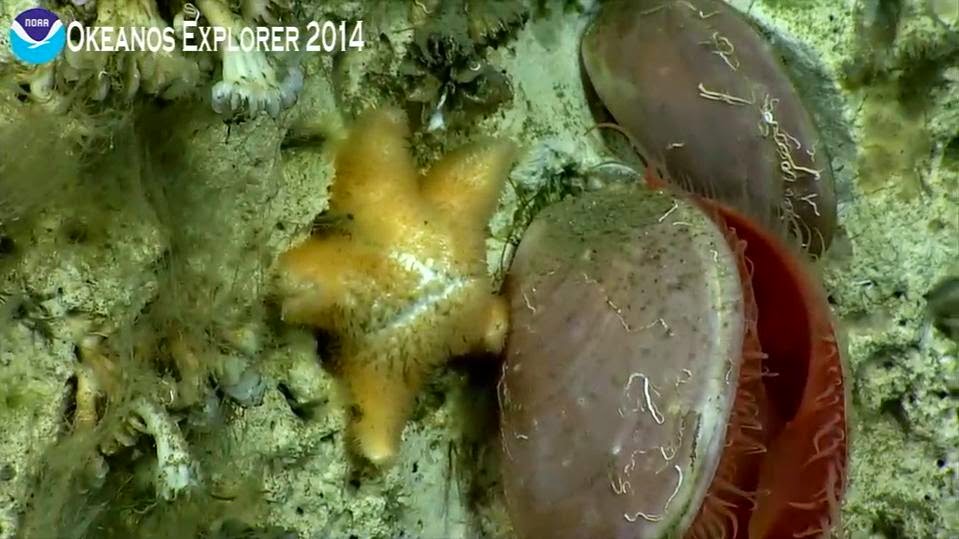 15. Solaster sp.
Solaster aka the "sun star" are multi-armed predators. Mostly known to feed on sea cucumbers and other fleshy prey, they are also documented as "cannibals" that feed on other starfishes.  More on this behavior here. 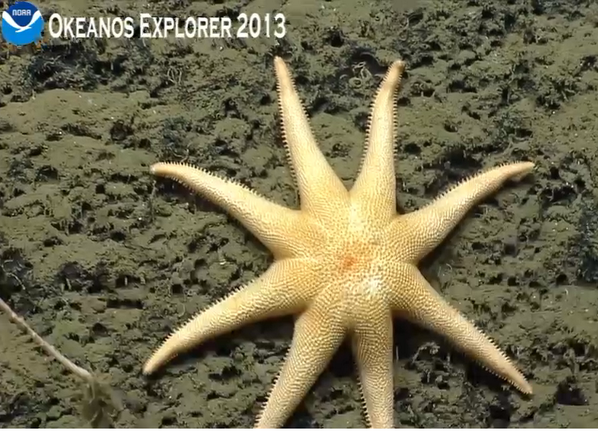 16. Henricia sp. 1
I have not written much about this group because the genus Henricia is a huge mess for taxonomists (i.e., people who describe new species and new diversity)..  Why?  Because these starfishes are all VERY similar in appearance to one another on a widespread scale! There are at least 2 species in this region.

Yes, species in this group occur all around the world. VERY widespread. But even in a very specific area, they can be nearly identical in appearance.  So, unfortunately, unless the species is highly unusual (has > 5 arms, etc.) these are quite difficult to tell apart... 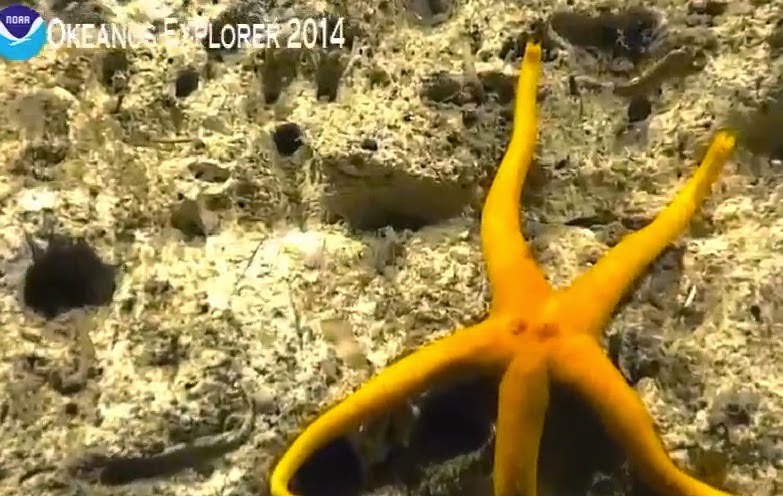 So, is that it?? Have I revealed ALL the STARFISH SECRETS???   Nope.  But knowing the names is the START of knowledge! I encourage everyone to let me know if you see any on these dives that is NOT on this post. Or if you see ANY of these species doing something, eating, spawning etc.
Posted by ChrisM at 5:44 AM

Great gallery; the diversity is amazing, which just doesn't do it justice.

Can you provide any information on the ophiuroids in photos 8 and 13?

Also, I would be very interested if you have a link or other information on the substrates, which are almost as interesting as the animals. I did say almost.