This week, a post about my broader field.. TAXONOMY, evolution and the discovery of new species!

Many of you may or may not realize that, although I am widely studied in echinoderms, my *actual* research focuses on starfish, specifically the diversity of starfish, including the description of new species and how they "fit" into the evolutionary classification of the echinoderms and all other animals.  I've written a bit about the description of new species before (many years ago now) here.  here and here.

Taxonomy is often one of the first things you learn about biology. How do you classify the organism? Plant? Animal?  Phylum? Class? Family? Genus?  Species? 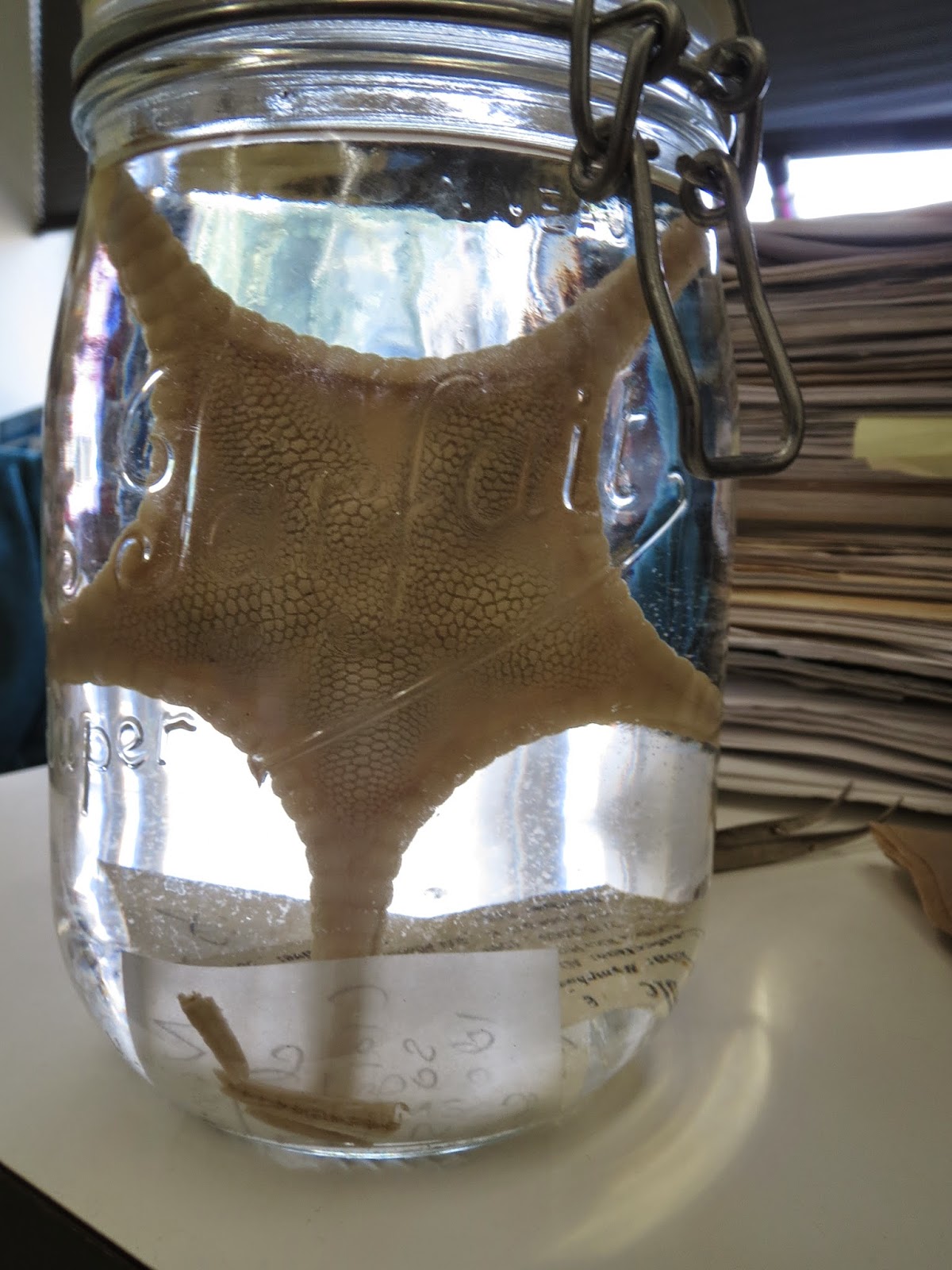 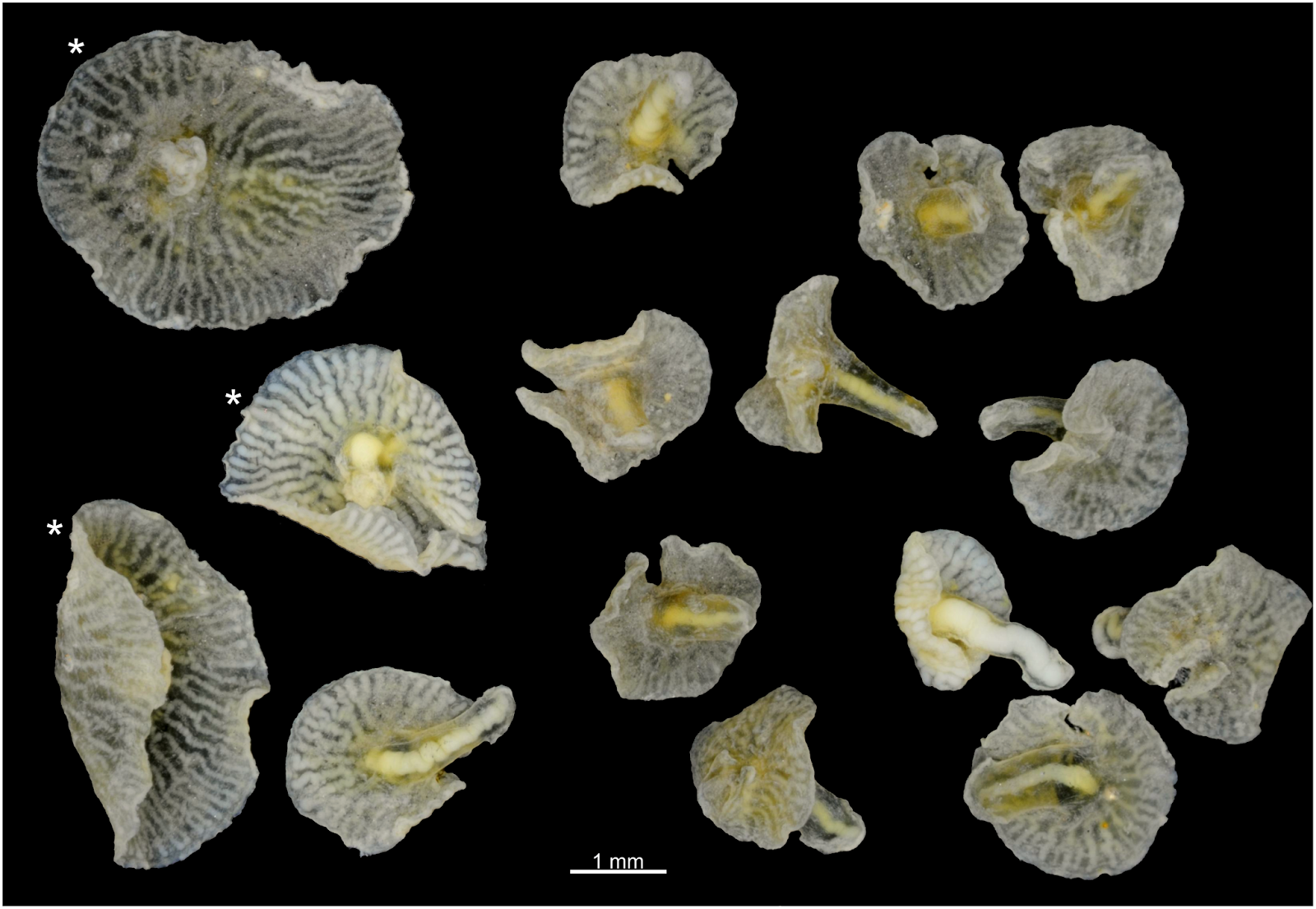 Some, such as the recent and mysterious genus Dendrogramma may have broad evolutionary relevance to our understanding of life on Earth.  Or at the very least, might just be some odd, evolutionary novelty which has peaked everyone's curiosity.

New species are exciting! and hold the promise of new knowledge. A new predator?? A living member of an extinct group?? Or perhaps a new species with an unusual adaptation??

This whole process of discovering new species has changed over the years. So, here are some recent discussions/dynamics/opportunities that I find worth mentioning and that might be surprising.

A caveat: the points below are skewed towards what I have experienced and how the broad patterns have relevance to what I've done. So, yeah, plants, fungus and protists are a bit different but much of the essential dynamic remains the same. And yes.. there's undoubtedly some stuff I've left out.

MANY new species await discovery and description. But do we have enough scientists who can do so?? Are we losing that expertise? Is there not enough taxonomy being done to document organisms before extinction overtakes them?? This is part of what is called the "Taxonomic Impediment",i.e. the number of species/taxa described is limited (and possibly declining) relative to their need.

One interesting contradictory result in answer to this question in the the two recent papers above, is that both of those papers allege that there are MORE taxonomists (people who describe new species and etc.) and MORE papers about new species being published now than there have been in the past.

But then, WHY is there still a perception that there STILL aren't enough taxonomists? And is that expertise decreasing? 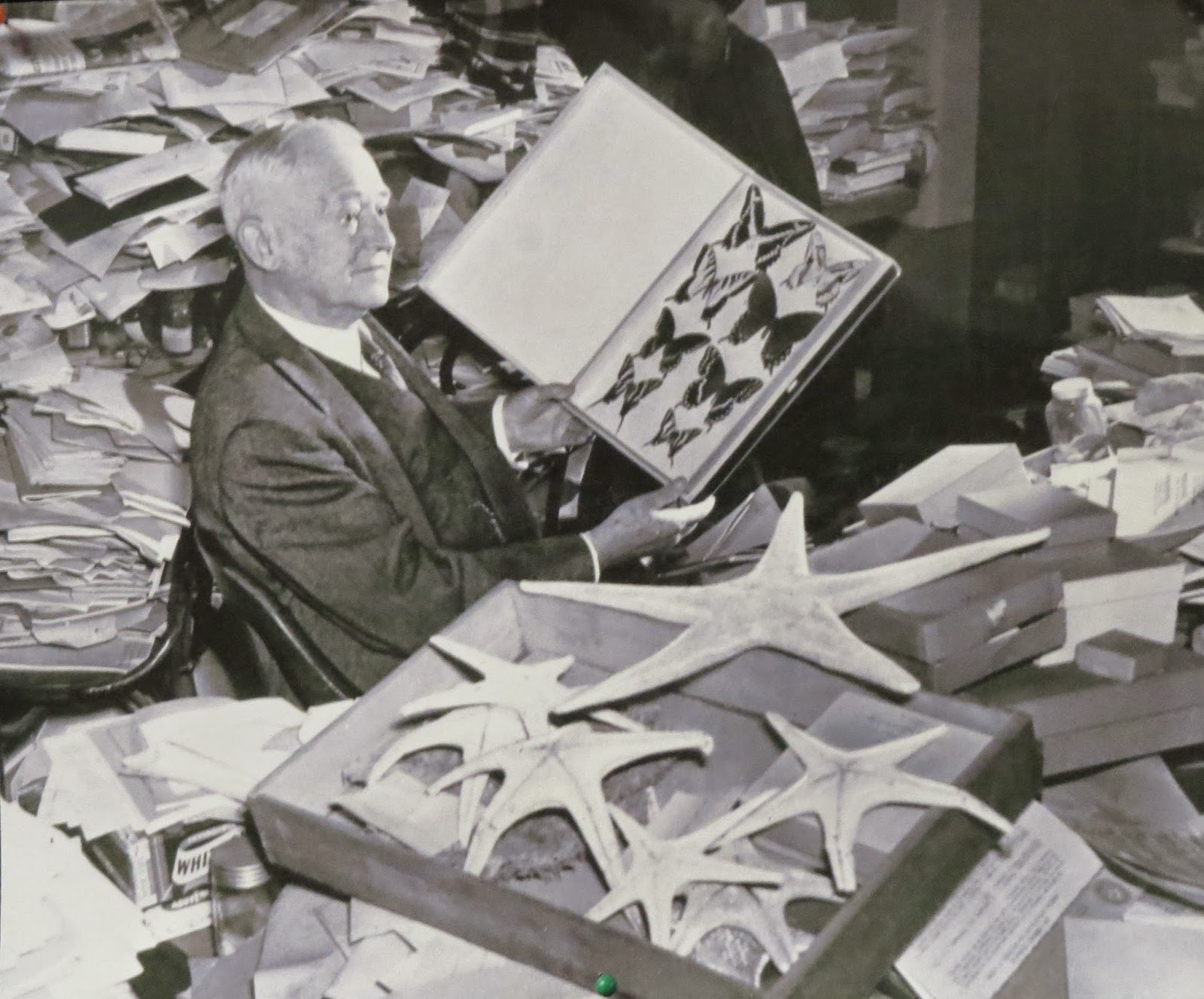 Tancoigne & Dubois have argued that essentially, even though there are MORE people working, the problem is BIGGER. And so, we haven't really upped our game so much as we have just "kept up" rather than made a real dent in the problem. Taxonomic inertia rather than momentum.

Remember that there is an urgency to describe the world's biodiversity before it goes extinct. This is the so-called "6th Extinction" or "Holocene Extinction." You can go here to see more about it.

The question is complex.. but I can tell you that from my experience, I am currently considered one of the only regularly publishing, broadly trained starfish taxonomists/systematists. There are a couple of regional specialists and maybe 3 starfish paleontologists but very few people work on the broad biodiversity of starfishes.  (as I did here in Japan early this year..) 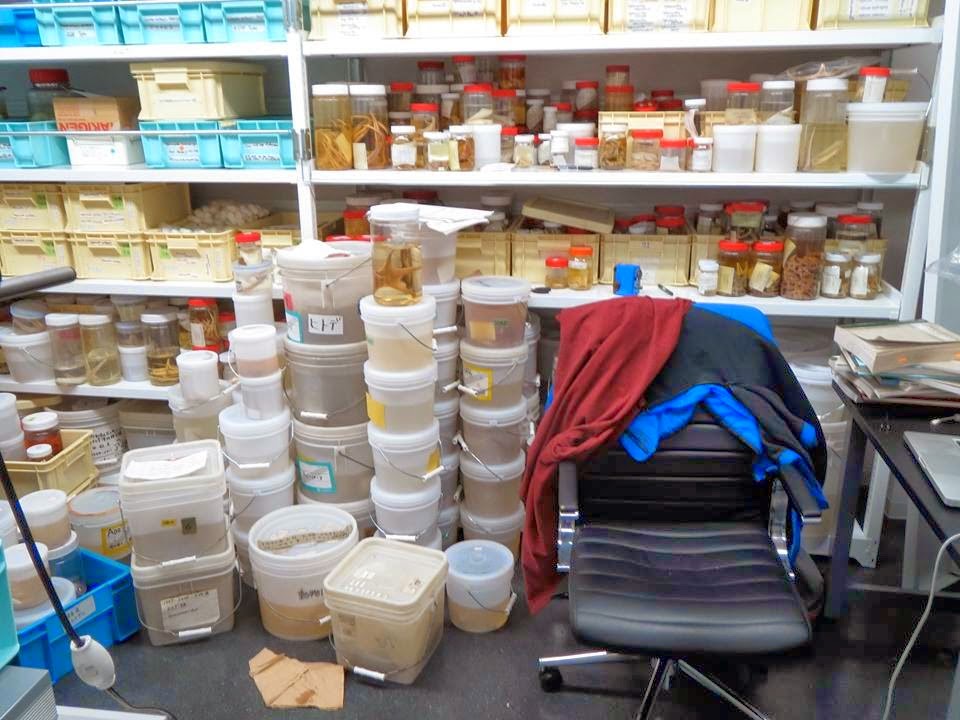 I have a backlog of easily a dozen or more species currently "cued up" in my "immediate projects" list. With many, MANY more waiting my attention. Remember that trip I took to the North Pacific with MBARI?  Almost ALL of the species I found were new! Who knows how many more new species await discovery with more workers in the wings?? So I guess that boils down to the question "Is that enough?"

There are easily whole phyla of animals for whom there may be all of one or two specialists in the world. Based on what I've read the estimates for undiscovered marine biodiversity, especially for invertebrates is pretty high.  And I can definitely tell you that the number of staff or faculty jobs for invertebrate zoologist/taxonomists is pretty small.

4. Most new species are "found" in museum collections rather than immediately on expeditions. 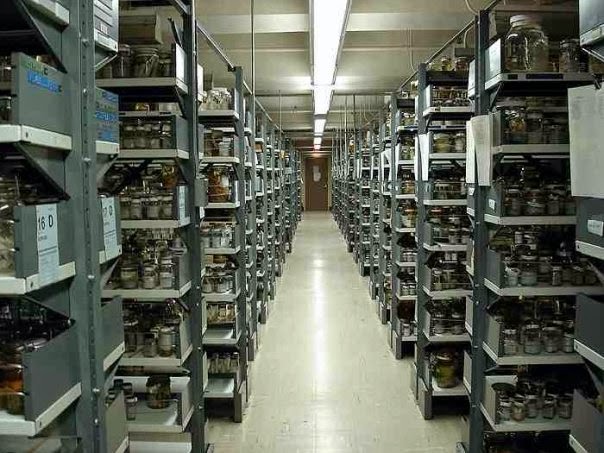 So, you know how I'm always taking these big trips to Paris, here and here. and Japan? This is because I'm visiting museums which have extensive holdings of deep-sea Indo-Pacific starfishes.

While its certainly true that I go into the field to collect starfishes in remote and exotic places (e.g., Antarctica-see below) 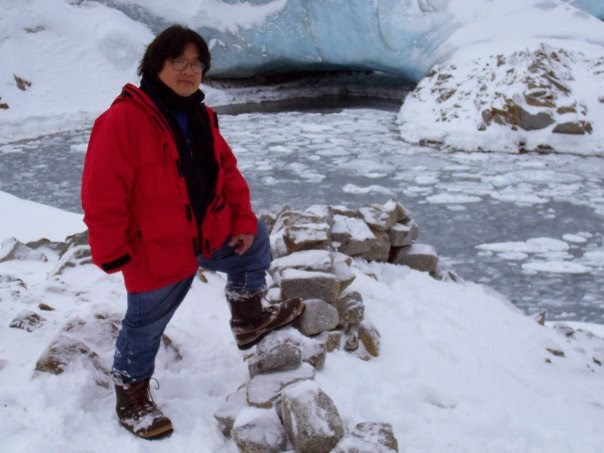 The truth is that many of the new species I've described are found from rooting around through buckets and which looks more like this. 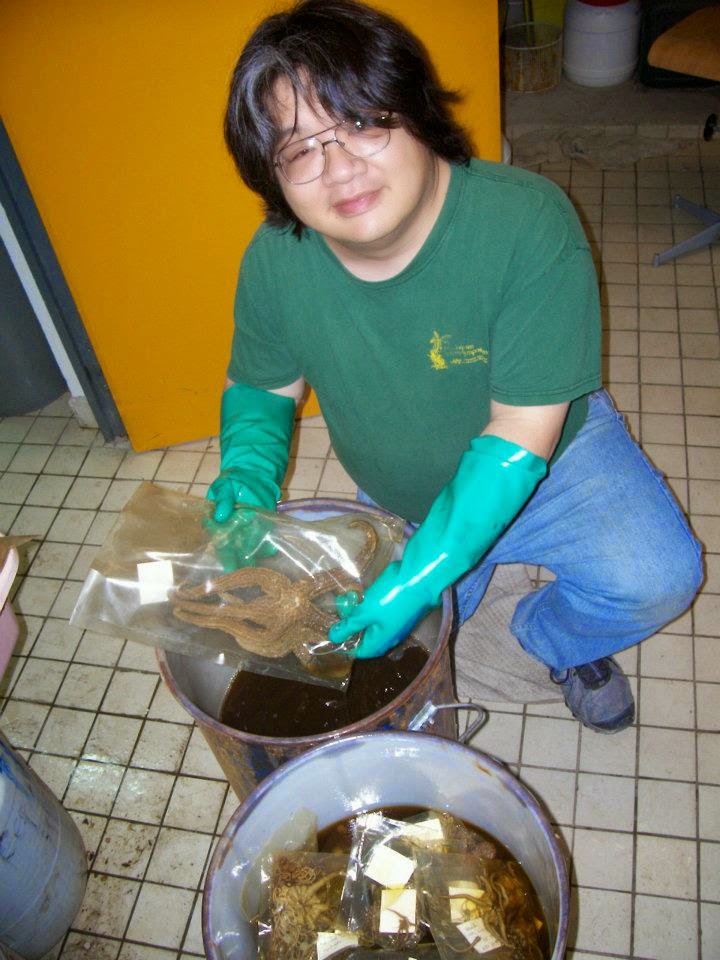 Every time I go back to say, the collections in Paris I can reliably depend on finding several new species.

A paper by Fontaine, Perrard and Bouchet (2012) report on time between museum storage & publication (more on that below) but they review one important point: Most specimens accumulate in museums following collection. Its often a misconception that new species are automatically recognized in the field and whisked away to be instantly described.... (although yes, it does happen..it depends..)

They are often stored in a museum, where they are sorted, preserved and shelved until a scientist can work on them.

How long does that take between museum storage to publication??

3. It takes on average about 21 years for a species to be described from "shelf" to publication 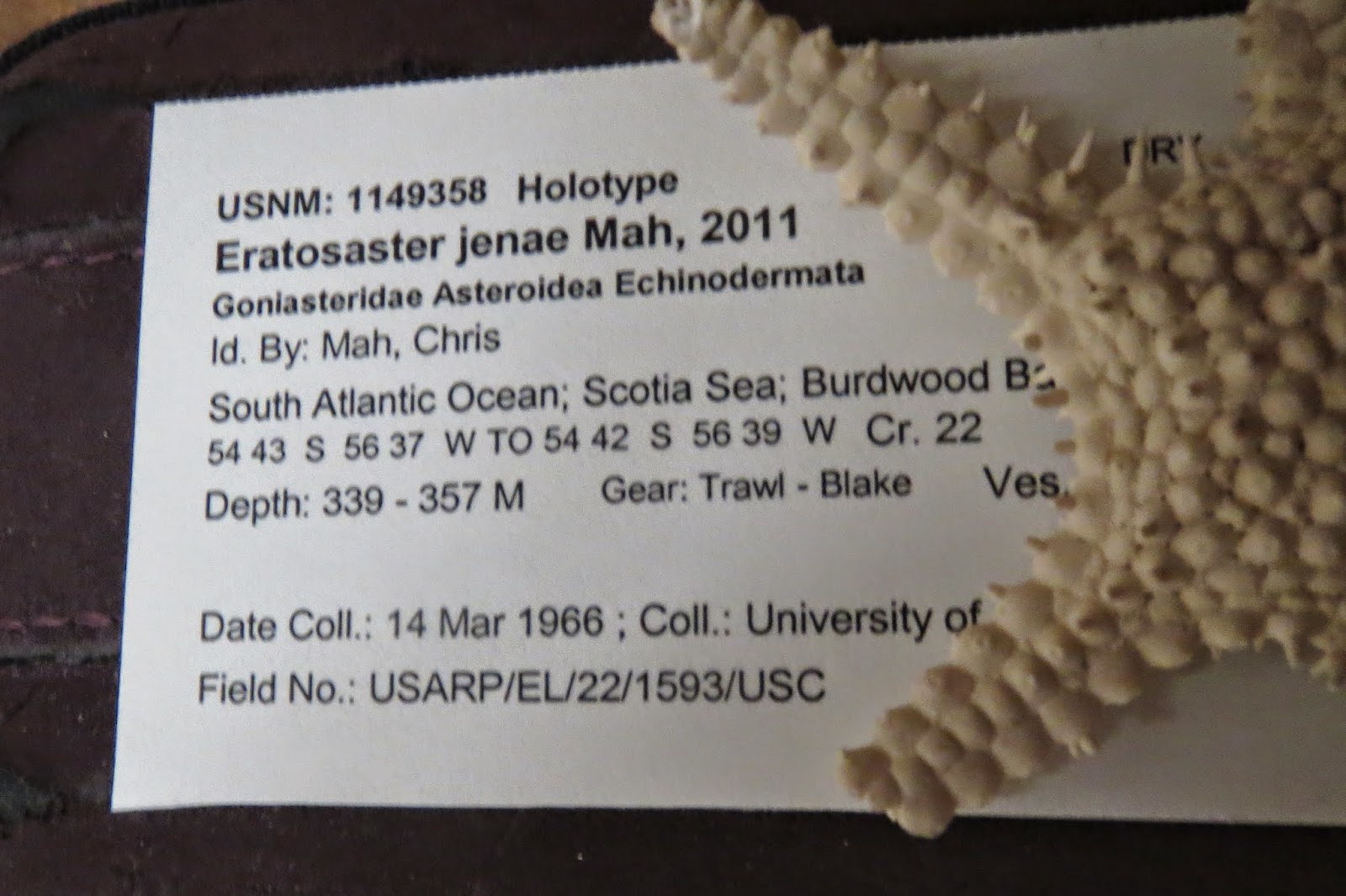 This is something I can verify: A new species can take a LONG time to reach publication. Note this new genus and species from Antarctica I described in 2011. Collection date?? 14 March, 1966!! This was collected 4 years before I was born!! Ha.

The Fontaine et al. paper further sampled researchers from a variety of fields and found that for a variety of disciplines, it took on average about two decades for a new species to be described following collection and museum storage.

There are a LOT of considerations of course.. Some specimens undergo years of study. DNA is extracted. Comparisons are made. Histology is performed. It depends on what kind of work is done.
Some fields have lost their only workers for literally a decade. There was easily a gap for about 10 to 15 years, when there was no one who was "the starfish  expert"until I came along.

2. Taxonomy from Images: Flickr & More!
So, image proliferation on the Internet has started to make a HUGE impact on natural history and taxonomy.

There is now a massive proliferation of images of habitats, organisms, and etc. via MANY different crowd sourced  (e.g., Flickr or Youtube) or other conveniently available resources. For example: screengrabs/twitter pics of the live stream Okeanos Explorer deep-sea feed! 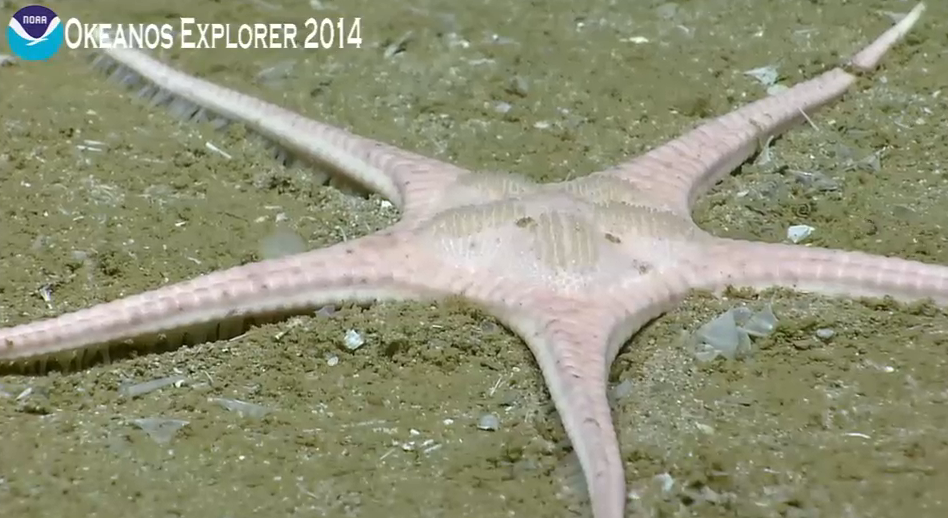 I've actually spoken to several of my colleagues about whether images they've seen on Flickr or Facebook could be new species and indeed, it is surprising HOW many there are! And why not? People who post their pictures travel all around the world or are in very distant settings. Some with great camera set ups and a good eye. There's a HUGE potential for data mining here with a nearly infinite number of pictures (many are never labelled).

Some might argue that usefulness of pictures remain limited, since no specimen is available for positive identification or vouchering in a museum. But who knows what kind of behavior? or habitat is spied by these videos?

For the deep-sea species.. even seeing the life mode and color is a HUGE step in knowledge over what scientists in the 20th Century, who often worked with a dead, dried specimen.

1. New Specimens via... Ebay??
Back in 2006, Dr. Simon Coppard, a sea urchin taxonomist recovered specimens of a new species of sea urchin, Coelopleurus exquisitus from the online auction website, Ebay!

This sounds kind of ...unusual, the truth is that scientists and natural historians have been buying exotic shells and items from vendors of "exotic goods" since the 1800s. Many species described from this time period were based on specimens obtained from "Far East" purchases. The Internet auction house puts a 21st Century spin on 19th Century practice.

Fortunately, this species was described in good order and with apparently little hassle (and I can only hope- good locality data!) 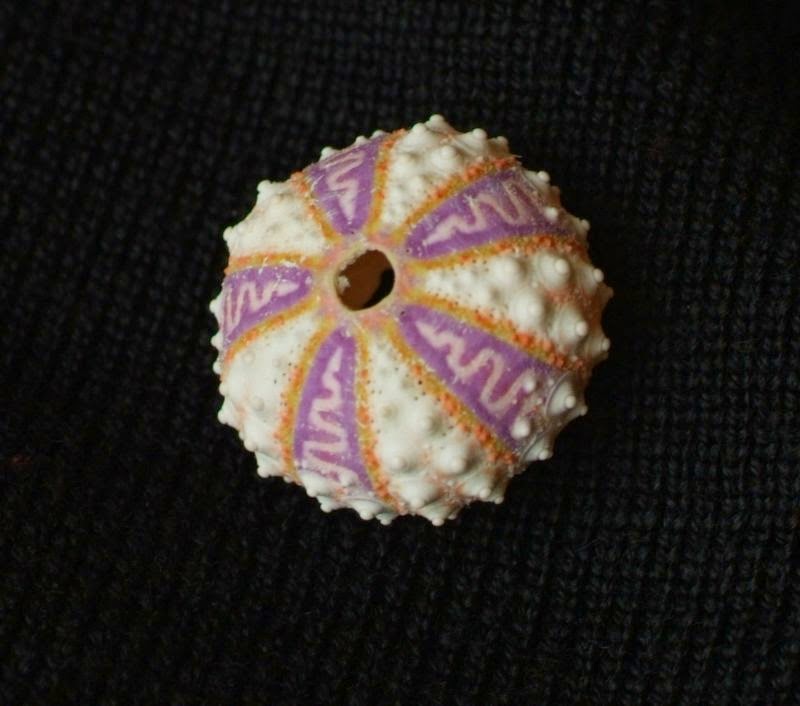 I have heard of subsequent "finds" via Ebay and as remarkable as it sounds, there are unusual and rarely encountered animals which sometimes come up for sale as "dried curios" or "seashells" or what have you.  Fossils also.

Relying on vendors isn't a good option relative to a formal expedition or even just a professional scientist collecting on his/her own. MANY issues can be at play. Permits are common place and some specimens may have been illegally collected. Some organisms, such as coral are protected by international regulations. Obtained specimens could be poorly preserved or have incomplete or downright incorrect locality data (i.e., where they were found). But sometimes, it can be another way to discover new biodiversity. Strange but there it is.
Posted by ChrisM at 5:34 AM

Really interesting article. I completely agree with the issue of storage. It's a particular problem for invertebrates. Most of the large fish are easily identified (although there are still some surprises, they are usually reclassifications of existing samples.) We collected four years of invertebrate samples from our deepwater surveys, but lost all our invertebrate scientists shortly after. So we have lots of samples sitting on shelves, with no one to examine them.

The glamorous life of a taxonomist, huh. Even the buckets look pretty fun to me! Nice article.
Hey do you have to think about HGT with echinoderm taxonomy? Seems to me it's the secret thing likely to wreck all the nice linear trees if it turns out to be common outside the prokaryotes.

So far I've not heard nor seen of any evidence or indication of HGT within echinoderms. As a clade, they have historically been uncontroversial and return as monophyletic in most of the big metazoan trees that I've seen.