Five Invertebrates that would be Terrifying if they were Bigger!

HALLOWEEN! Every year, I like to use the season's festive theme to try and highlight some cool invertebrate diversity! Last year I did an overview of creepy worms and the year before that, I did an overview of spooky things that echinoderms (my research focus & subject of this blog's love) are known to do.

So, note that I actually am using REAL aspects of these animal's biology that make them, creepy, terrifying, spooky, whatever. Unlike SOME places.. I won't just find some weird looking, random animal and just SAY its spooky or creepy. It actually HAS to do something worthy of the name!

This year: a theme that often comes up with invertebrates: Predators that would be terrifying if they were larger!!

So, this is a pretty popular trope and frankly, there are ALREADY a bunch of huge, oversized marine invertebrates that freak people out. You will doubtlessly see some tweets about those beasts this week.

Here are some of my picks for invertebrate PREDATORS that to me, have earned the RIGHT to be optioned for movie rights! or other fantastic treatment!  So, nothing that is weird looking but harmless (I mean, c'mon, BASKING SHARKS? SHREWS?)

There were MANY to choose from of course and so perhaps next year I'll present more of them. But for now, here's some good ones.....

5. Arrow Worms (phylum Chaetognatha)
Imagine the oceans filled with fast-swimming, transparent worms with sharp spines for teeth on their head, and which can effectively "see" in a 360 degree field of view AND attack and devour prey several times their own size.

Bodies are transparent and with unusual "eyes" that are arrayed in 5 directions, essentially giving them a full field view (360 degrees). Fortunately, these "eyes" lack lenses and are thought primarily to be used for orienting to light and dark.
They feed with these big nasty hooks that emerge off the front of the head!!  Some are even known to do so with venoms like tetrodotoxin, the potent toxin from puffer fish.

Arrow worms have been documented as having capture prey several times their size...like fish! 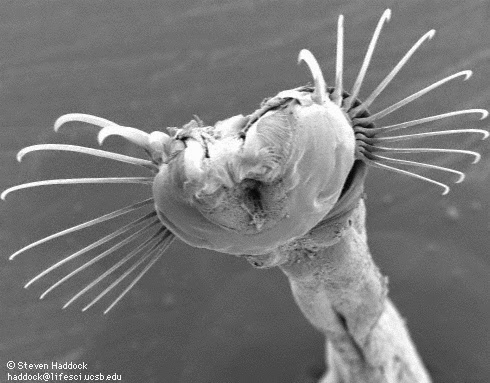 Here's an interesting video that shows the spines extending from the head on a Japanese species...
Sadly, or perhaps fortunately for us.. these are pretty small. Ranging from less than half an inch with monsters up to 4 inches!

But what if they were HUGE????  Honestly, I think one movie from 1998, Deep Rising had these things, which swam through the water at a good clip. and the spines were KINDA chaetognath like! 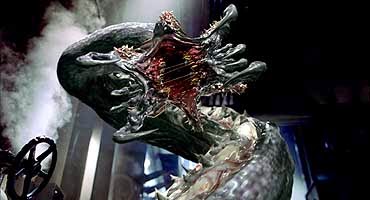 4. Cone Snails.  Does everyone know what cone snails are? Marine snails that use a modified tooth like a harpoon + very potent toxins to capture their highly mobile prey. Often times, vertebrates like fish..

Some of them, however, rather than using the proboscis to directly paralyze prey, will use this  highly modified "net" which is presumably, a modified feeding proboscis..
Yikes.. imagine what that would be like if cone snails were bigger..like bear or even elephant sized!

3. Rhizocephalans! Barnacle Parasites that take command of your Body!
Imagine  a fleshy parasitic network that works its way into your body, commandeering your all your bodily functions, INCLUDING your gonads, such that all you do is produce eggs to make NEW parasites.

These don't really NEED to be bigger..but merely adjusted to parasitizing MORE than crabs.

These have been written about in some detail by Rebecca Helm over at Deep Sea News. Her account is quite chilling. I recommend reading it in the dark, while you are alone with some seafood.... 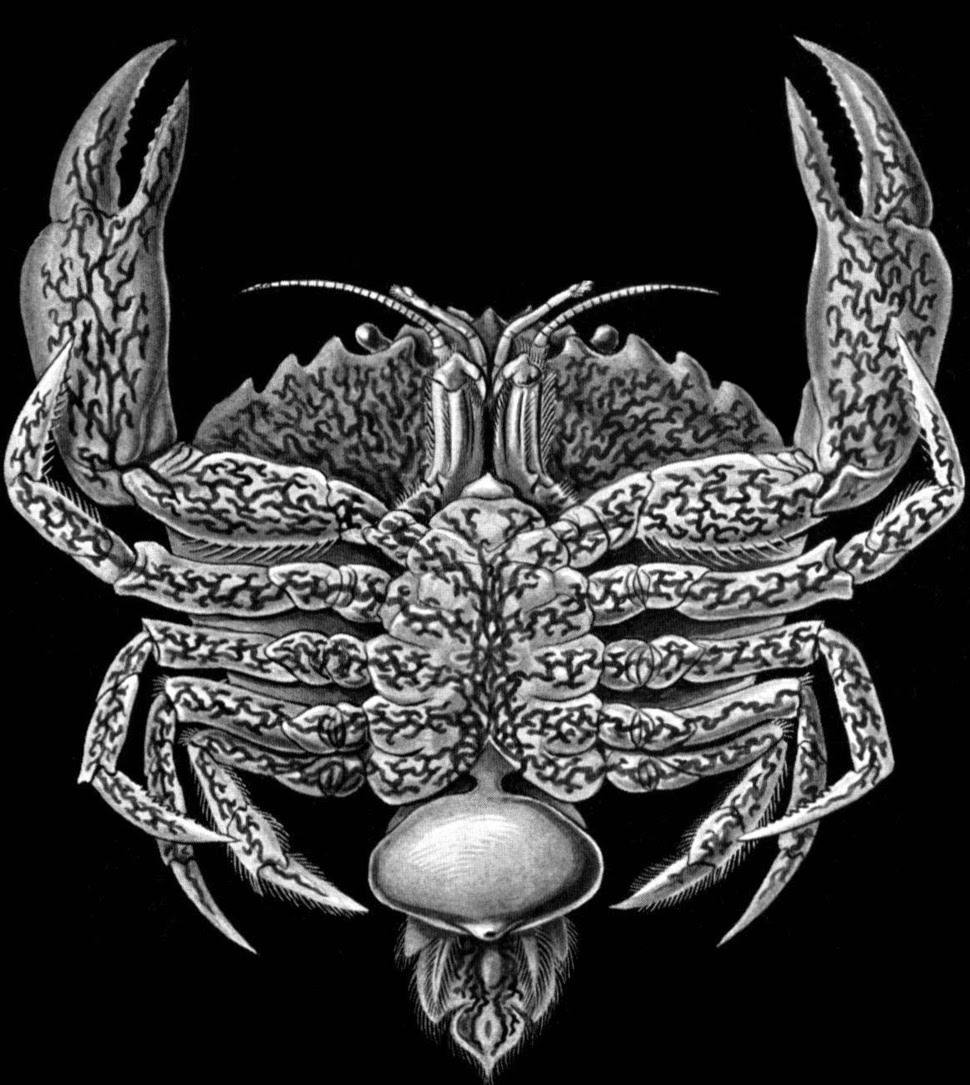 Or, watch this video from Casey Dunn's "Creature Cast" series which also very ably explains the life of this creepy parasitic barnacle...
Rhizocephala: The Extraordinary Life Cycle of a Parasitic Barnacle from Steph Y on Vimeo.

2. LEECHES! This is kind of a cheat, since I put leeches into my "Creepiest Worms" post last year.  I just thought this was kind of awesome...

1. Labidiaster annulatus, the giant 50 armed star of the Antarctic!
This is one of my FAVORITE beasts.. which I wrote up here, early on in the blog (and on numerous other occasions).
But the short story:  Giant 1.5 foot wide starfish with 50 arms, catches krill and other prey with arms!!

The surface of the starfish, especially on the arms is covered by THESE..

Jaw like structures called pedicellariae which act as "bear traps" to capture krill and other prey if they get too close to the arms.
These are ALREADY pretty big. About 1-2 mm. But look at those fangs!!  and the shanks on the teeth! 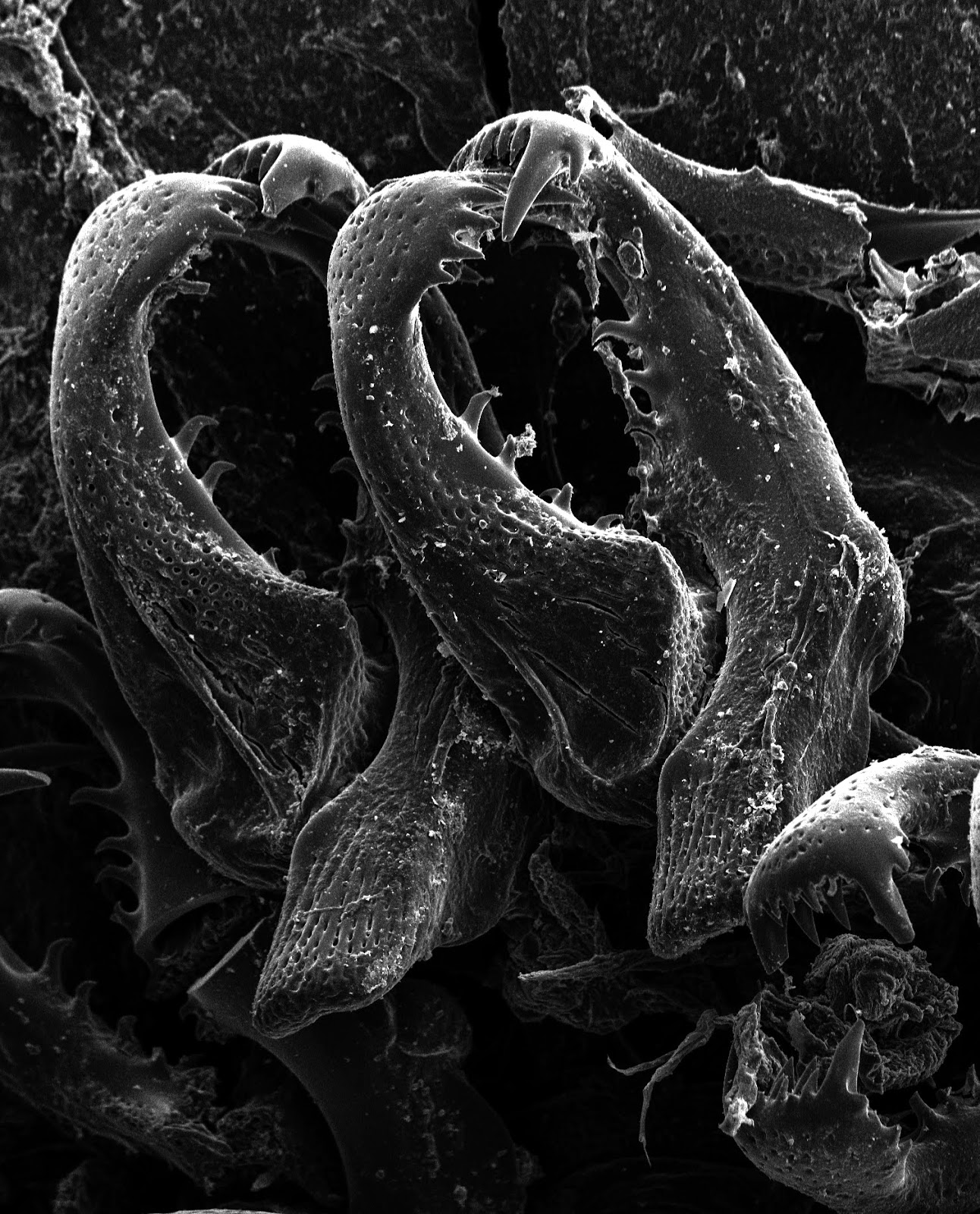 Can you IMAGINE if this critter was DOG or even BEAR sized on the land????  Catching everything from tiny mammals to birds!!!

For the Next few weeks: Echinoblog Returns to PARIS!
Posted by ChrisM at 6:31 AM