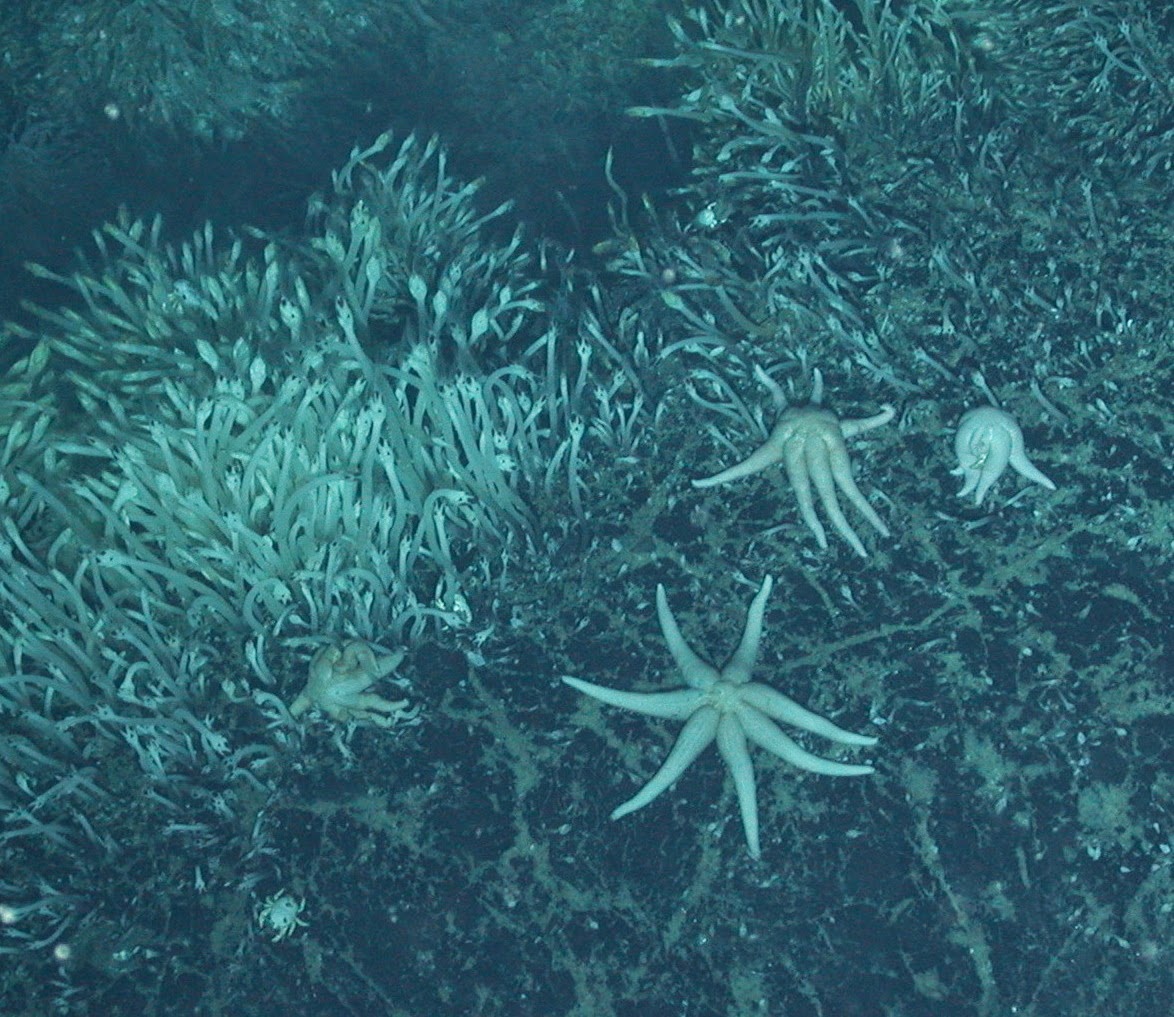 Another new week and another new discovery that I'm overjoyed to share with everyone! A NEW paper I've published in the prestigious Zoological Journal of the Linnean Society! link here This paper was co-authored by colleagues from the British Antarctic Survey (BAS), the National Oceanography Centre at Southmapton, in the UK, the Monterey Bay Aquarium Research Institute (MBARI) and Dave Foltz from Louisiana State University.

This whole paper is basically a monument to scientific collaboration! Basically, I was contacted by the BAS to study sea star specimens they had collected from a new hydrothermal vent system in the Scotia Arc, (Antarctica) which is famously the habitat of the "Hoff Crab"   and as it turns out, they encountered MANY different types of animals from this area. Barnacles, "hoff crabs"...and even sea stars (as we can see from this Wired gallery!)

They turned them over to me for study and while analyzing their DNA we found that they were actually closely related to ANOTHER sea star which I had collected during the MBARI 2009 Pacific Northwest Expedition!!

UPDATE: New Video!
There aren't many echinoderms that live in these types of environments, such as brittle stars, sea cucumbers but this species is the FIRST starfish/sea star to be found in association with a hydrothermal vent habitat!

Why? Hard to say, exactly but it probably has to do with the fact that most echinoderms can't process toxins very well. Their "body fluid" is basically sea water. This is probably why there are no freshwater or land echinoderms.

These starfish aren't "primary" vent fauna, such as big vent worms or clams that can manufacture food out directly of toxic sulfide..  These exist at the edge of the community feeding on the animals that ARE part of the primary vent community. BUT that said, they are pretty important (see below)

this handy chart from THIS paper by Leigh Marsh et al. in PLOS One!  shows this relationship... 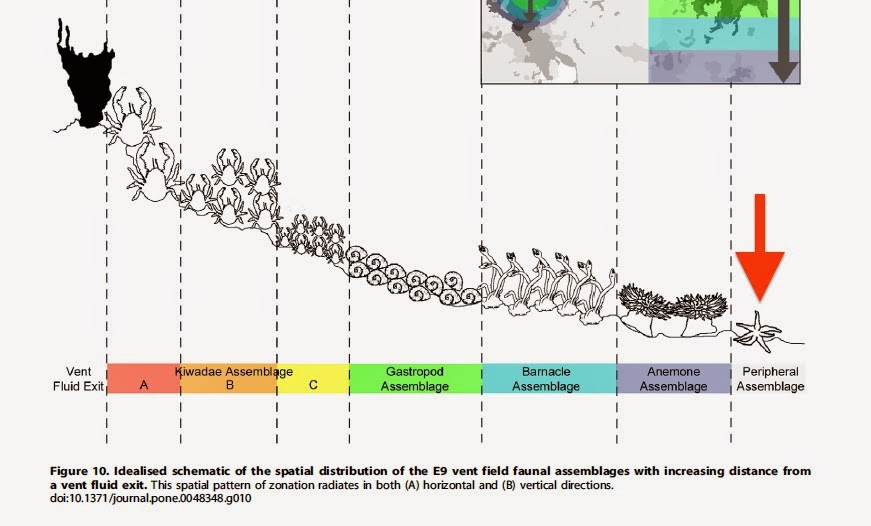 2. What do they eat? Barnacles & HOFF crabs!
A study of the food web among the fauna at the Scotia Arc site (in this keen PLOS One paper!) showed that they occupy a fairly important role in this community as one of the top predators.

Among their food? The weird stalked barnacle, Vulcanolepis The zonation above is probably not that discrete but it does suggest that animals on the "periphery" probably move inside and among all the inner zones, although there are probably several of these that are at the "edge" of their overall zone... 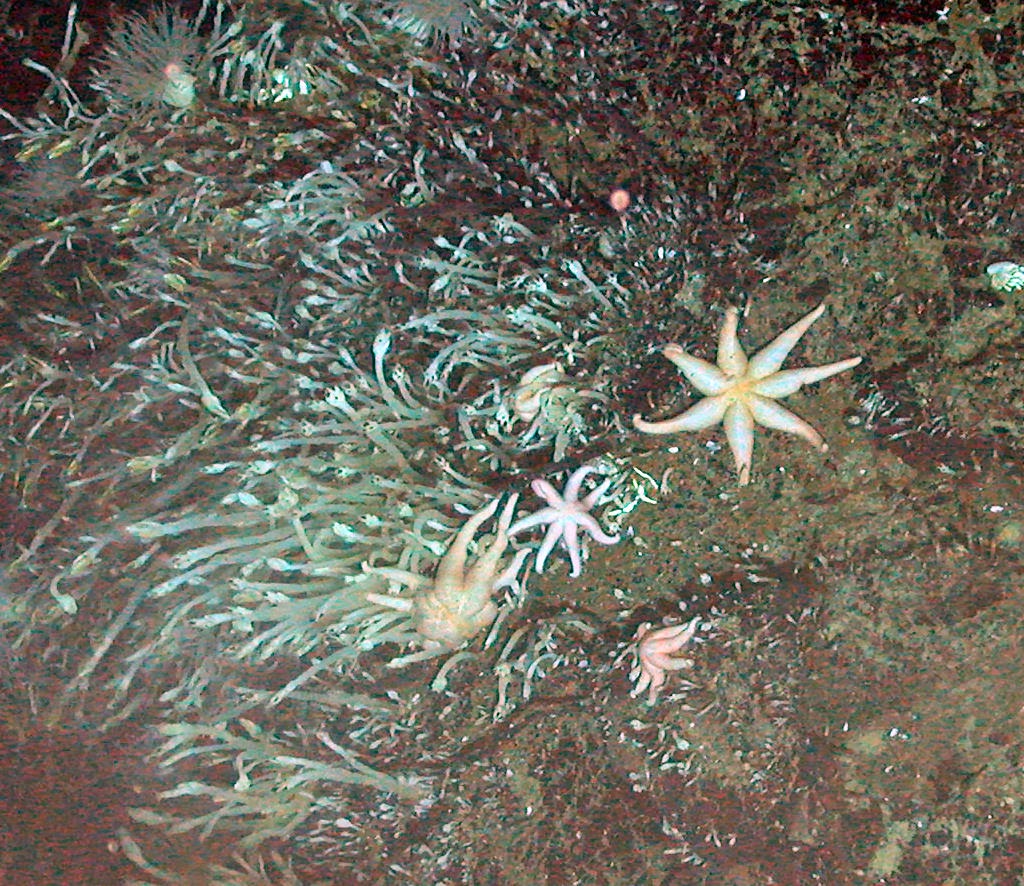 and the very abundant "hoff crab" 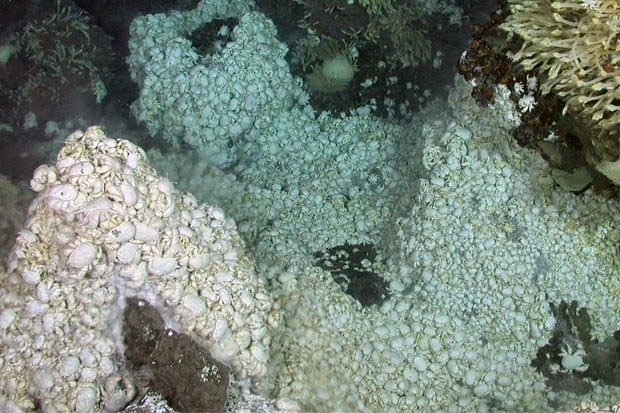 There's obviously a LOT we still have to learn about the ecology of this habitat! But as far as understanding a habitat 2000-2500 meters down, in the Antarctic??  Knowing the top predator is a good start!

3. NEW family, new genus and two new species!
So, we have a weird, deep-sea habitat with weird inhabitants. What does the starfish look like??
The skeleton is pretty reduced. A fairly soft and fleshy body wall. 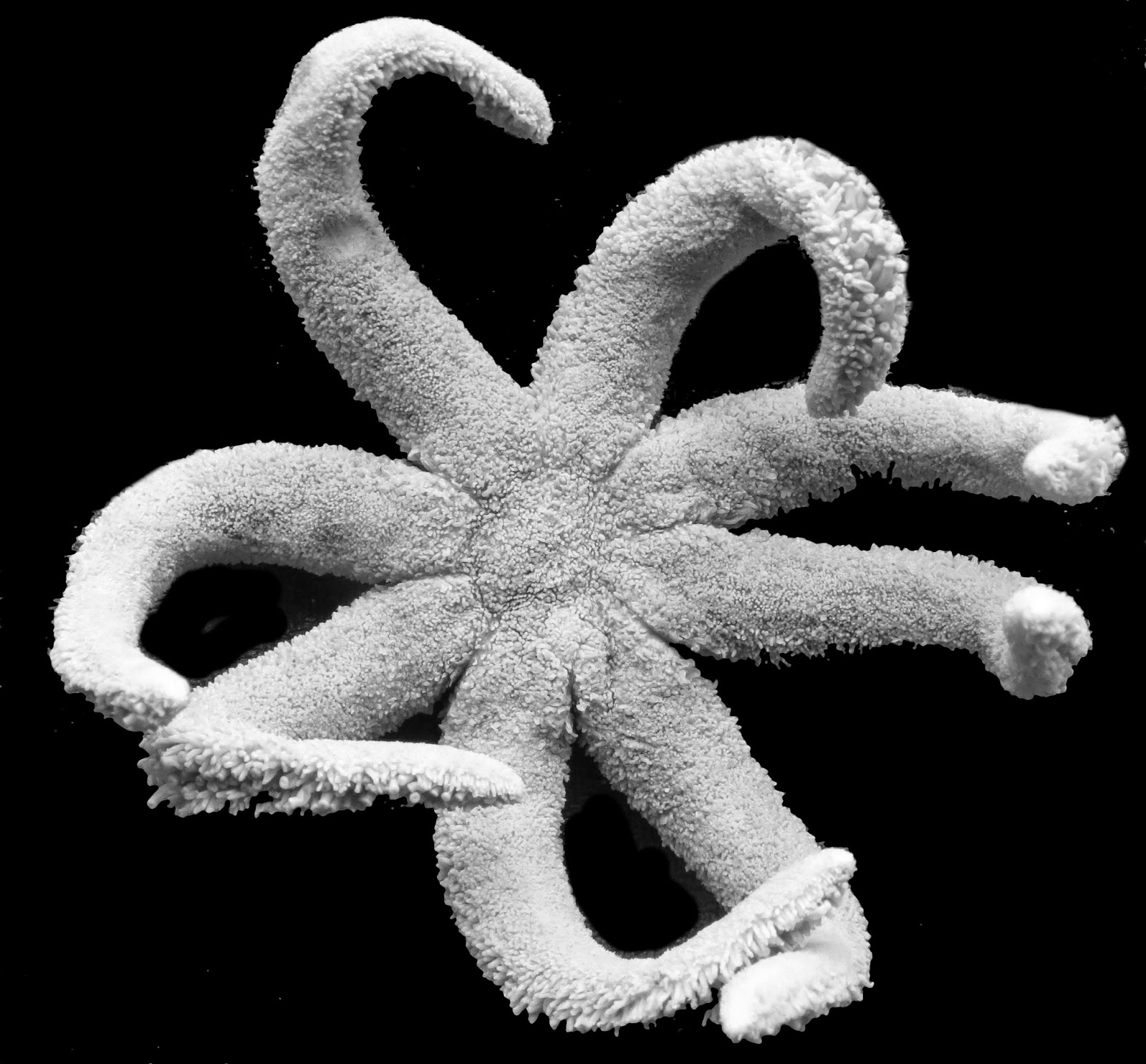 As I had mentioned earlier, my colleagues and I were ALSO studying this beast... an innocuous looking 6-rayed sea star from the North Pacific!! Collected by myself and MBARI during the 2009 Pacific Northwest Expedition!

Astonishingly, almost EVERYTHING starfish from the area studied during the expedition was new!! 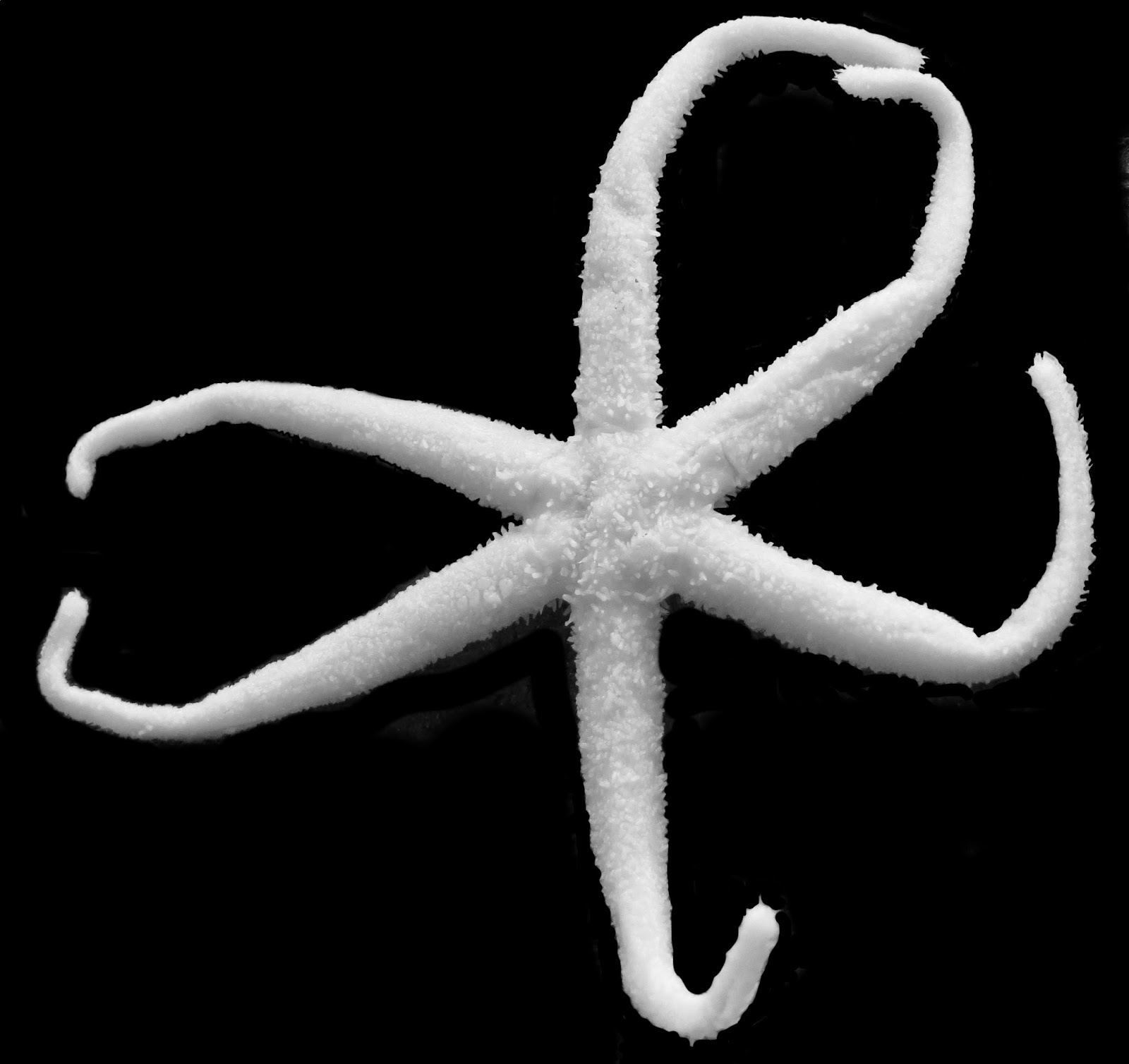 An  analysis of the molecules from these two species showed that they were in fact, closely related to one another!!

The truth is that there were not a lot of external characteristics that could have been used to have done the same analysis.

AND molecules also revealed that these two species were part of a lineage or clade SEPARATE from other known species! 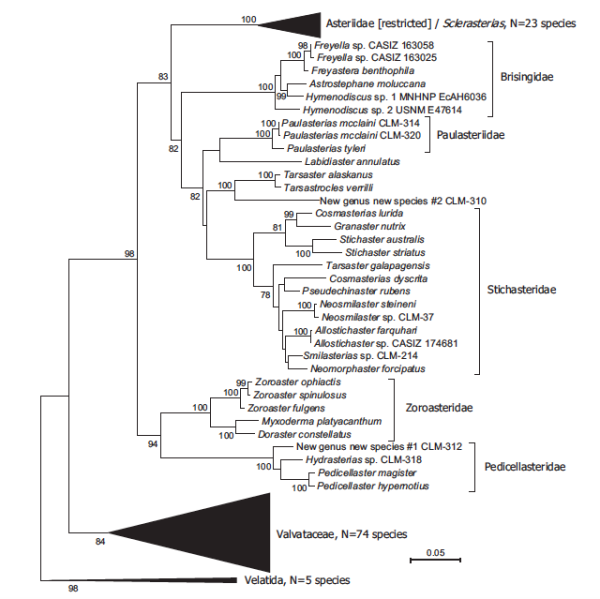 This makes sense. "New" ecosystem and you have new species which compose that ecosystem. Another reason that taxonomy is important!

This makes these species one of the FIRST new families of sea stars to be described since the 70s! (or possibly the 90s, it sort of depends on how you look at it)

4. Unusual and yet related to something familiar...
So, a lot of this might seem kind of alien to everyone, so here's a little something that I think everyone can relate to..

It turns out that these two starfish species are members of the Forcipulatacea, which is the larger group of starfishes to which familiar, intertidal species belong! Read this account of their unusual evolutionary tree!

Are both distant relatives of these two weird deep-sea species!  What character is shared between them? Features such as these pedicellariae! Tiny wrench shaped claws that cover the body... 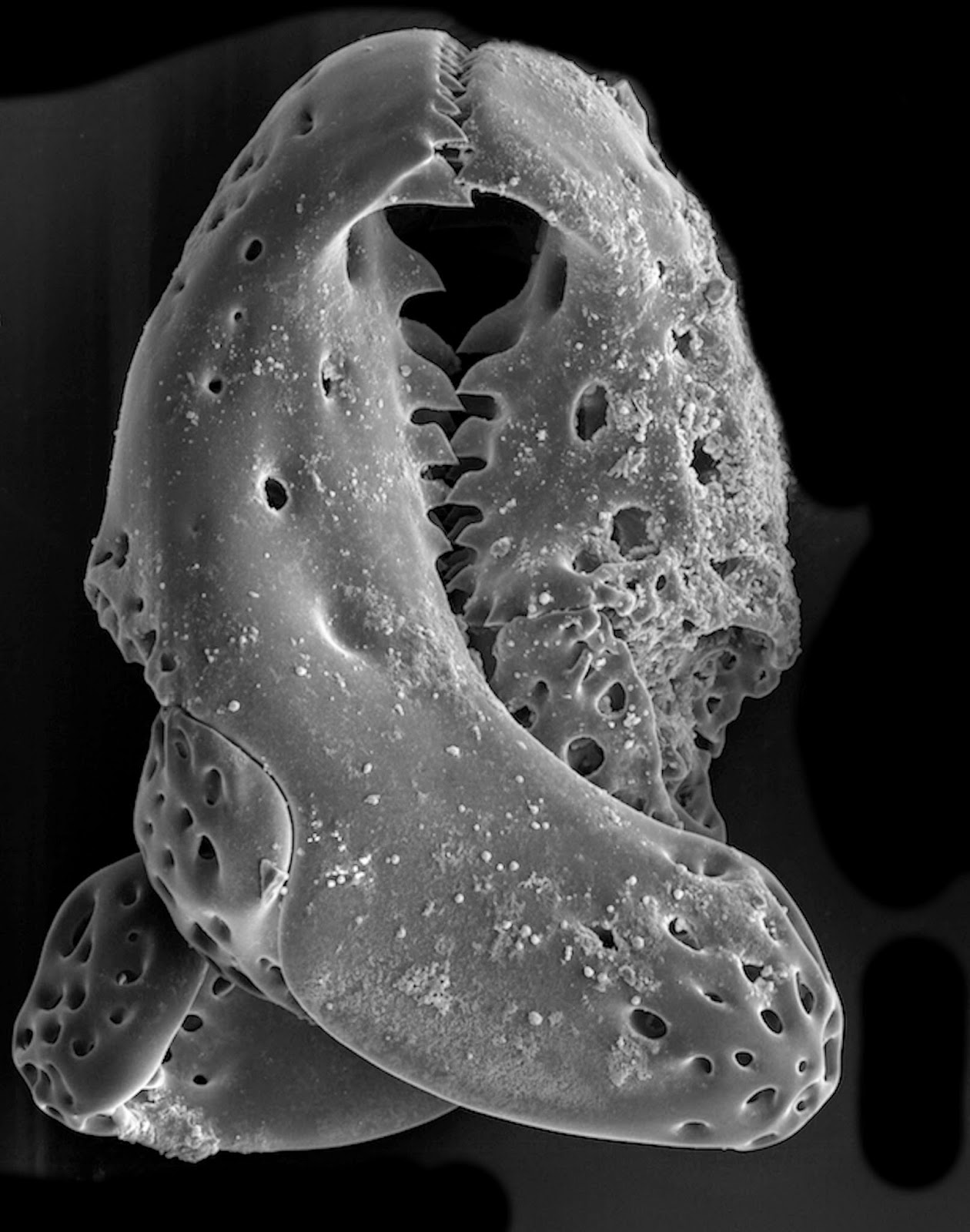 5. Named for some deep-sea biologists!
So... WHAT TO NAME THEM?? As a taxonomist, one of my super powers is that I can honor a person, place or thing by converting their name into Latin, thus immortalizing them into the history of science!

As a matter of good practice, its considered more informative to use descriptive terms, but ultimately species names are at the discretion of the author.

Which basically translate's to "Paul Tyler's starfish" (kind of)...

Dr. Tyler is a HUGE name in deep-sea biology, having co-written one of the most important books in deep-sea research in addition to hundreds of articles on deep-sea ecology and invertebrates!

Professor Tyler was recently been made a Member of the Most Excellent Order of the British Empire (MBE)!!(here) 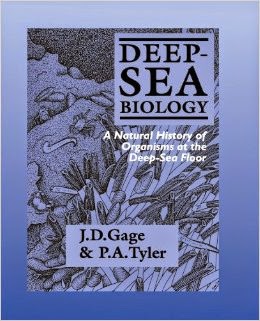 The North Pacific species was discovered under the auspice of my colleague and friend Craig Mcclain over at Deep-Sea News!

And so, I deemed that this second species would be named for him! honoring him was critical!
Otherwise would these species have EVER been discovered if it were not for him??? 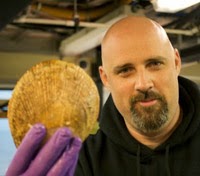 Craig has written a GREAT post on Paulasterias mcclaini over at Deep-Sea News here.
MORE QUESTIONS!..This discovery is only the START of many MORE questions! 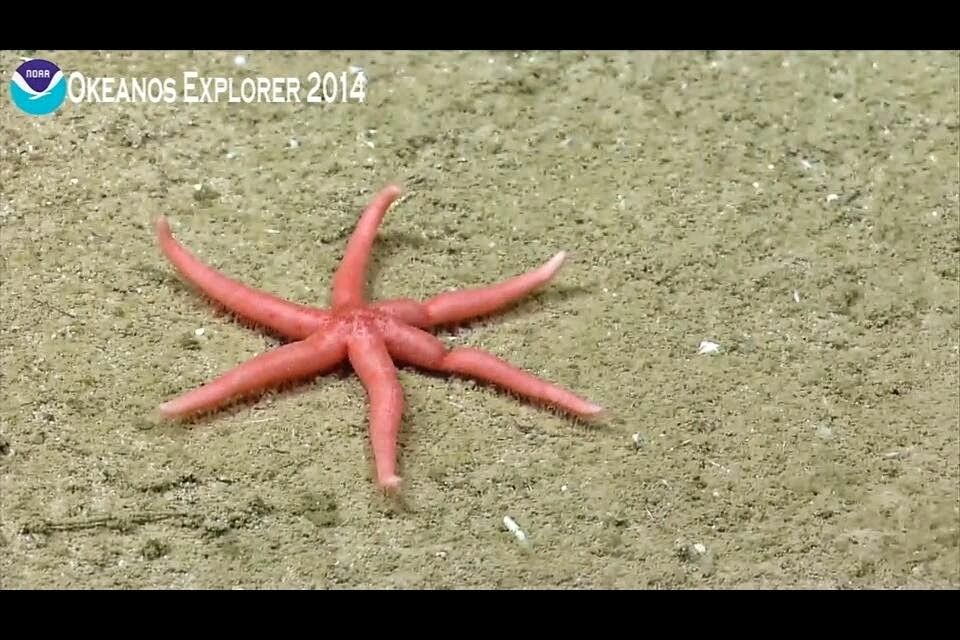 Congratulations on your find, and I appreciate your giving the public a peek at your work!

Great blog! Interesting critters and fantastic that you named one for my former graduate adviser :) have happy memories of meeting you in SF when Jon & I talked about hydrothermal vents in 1995!!