Many echinoderms appear to adopt a particular stance when emitting gametes.  This bit I wrote awhile back shows sea stars and brittle stars standing up on their tippy toes for example.

Theyposition themselves into the water column in order to take advantage of better water currents for their gametes to disperse. Or at least, that's what seems to be the case. This reproductive posture is actually not all that well understood.

So, its time for ANOTHER installment of sea cucumber spawning!!

One important thing to realize? That in spite of their shape and the color of the materials being emitted, we CANNOT identify the sex of the sea cucumbers in the pictures.

This diagram nicely sums up the difference in reproductive material. One emits the male gametes while the females emit the egg. But its likely not the case that they are always this conveniently near one another..
The eggs and the sperm meet in the water and fertilize in the water column.  Once fertilization occurs, the fertilized egg matures into a specific sea cucumber larvae, known as an auricularia (sometimes referred to as the auricularia stage):

And it is the above larval stage which undergoes several more stages of growth until it settles onto the sea bottoms and matures into an adult sea cucumber.

BUT to get there, the adults have to spawn! Here's a great shot of what seem to be at least 2 species of sea cucumbers from the Atlantic (Stetson Bank in the Flower Garden Banks, National Marine Sanctuary).

Since these guys are likely trying to take advantage of the same water current to carry their gametes to their destination, several individuals (from different species) are likely to find locations in the same general area.

This one seems to have found a particularly safe area around some diadematid urchins...

From Japan, we have several very nice video captures of various sea cucumbers in spawning position...

Their postures are fairly arched and position the body well into the water column.


And here are further examples of sea cucumber species emitting gametes from around the world..
In stark contrast, some other species seem to be closer to the bottom during this period, with only part of the body raised off the ground.

Interesting that both of these are on sandy bottoms. Coincidence? Difference in species? Hard to say.

IN CONTRAST, there's other deep-sea sea cucumbers, as presented in the NMNH Invertebrate Zoology blog,  which actually huddle together to optimize reproductive success (image from this new paper!) 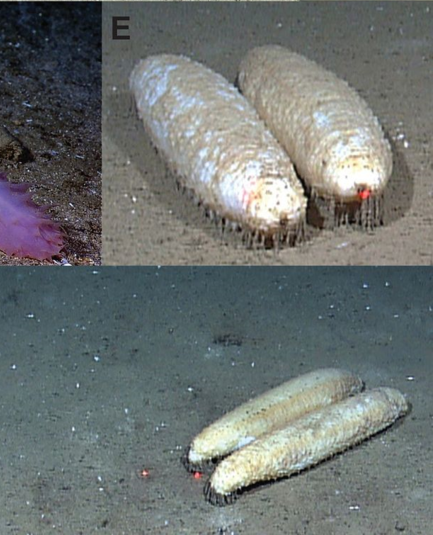 An increasingly common sight on crowd-sourced media and on deep-sea exploration! Simple observations which remain a fertile area of study... (yes. I went there!)
Posted by ChrisM at 5:13 AM

Me encanta tu blog! Do you have any post about pseudocopulation in sea cucumber?

I don't really know of any accounts of sea cucumber pseudocopulation. But as shown-they are often in proximity to one another during spawning events.

Could you please email me some papers on sea cucumber spawning?

Thanks for your answer Chris! Im currently studying spawning behavior in the three rowed sea cucumber, and they do really weird adorable stuff. You would appreciate it. Cheers!

Working within the nearshore on the Treasure Coast of Florida this summer, we saw large aggregations of individuals under ledges in 12-20 ft of water. Do you know of any published accounts of aggregating behavior for spawning success? It was in June of 2015 off Vero Beach that we made these observations. Great photos on your blog, we unfortunately didn't take any.

Hi,
I think that there are accounts of reproductive aggregations but sea cucumbers vary widely. I will keep your observations in mind when next I spot an appropriate reference. thanks for the very interesting observation.