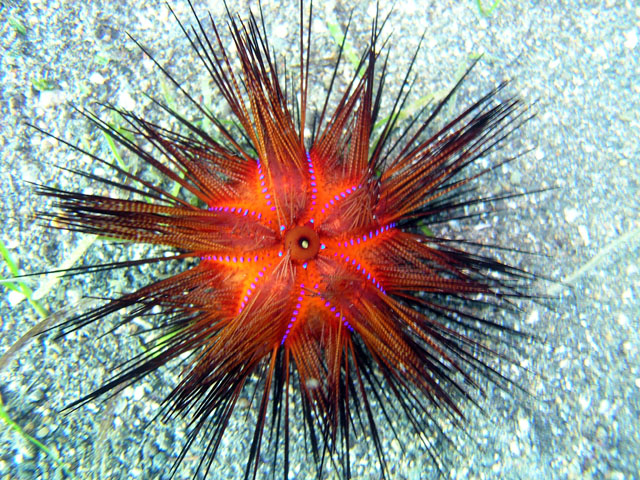 A happy July week to all of you! So, as we enter into the lull of the summer I present to you some choice Echinoblog image and video picks from various image streams that show off one the internet's most frequently photographed sea urchins! The diadematid ASTROPYGA!

Common names of these urchins include "radial urchins" and "fire urchins." But many refer to echinothuriids in the genus Asthenosoma as "proper" Fire Urchins, for obvious reasons.. but mainly because they are VERY painful to get stung by..

Astropyga also appears to have a rather painful array of spines but I'm unsure if these pack quite the toxic wallop that Asthenosoma does..

Astropyga includes four known species, one in the tropical East Pacific and another in the Indo-Pacific and two in the tropical Atlantic. All are known to occur primarily from relatively shallow to mesophotic depths as we saw recently on a Bishop Museum expedition to the "Twilight Zone" (here)

But even within the widely occurring Indo-Pacific species. A. radiata there appears to be quite a bit of color variation from the dark colors seen below to the lighter ones.

The genus name can be broken down to "Astro" meaning star and "pyga" which refers to rump or buttocks.. so the name literally translates to "Star Butt"!!.

Flickr and Youtube are GREAT for picking up on natural history observations. Yes, there's always the lack of scientific rigor but sometimes divers just make simple observations. And THAT can be the start of knowledge.

All the images below are probably A. radiata from the Indo-Pacific.

Astropyga scavenging on dead fish! (Lembeh)
Based on a round up of papers I could locate, A. radiata has been reported primarily as a scavengers, feeding on algal debris and other stuff from sediments, etc. But if this image is accurate (and not posed) they occasionally much on dead fish as well. This is actually consistent with other sea urchin feeding habits, so I feel comfortable in presenting it here.. 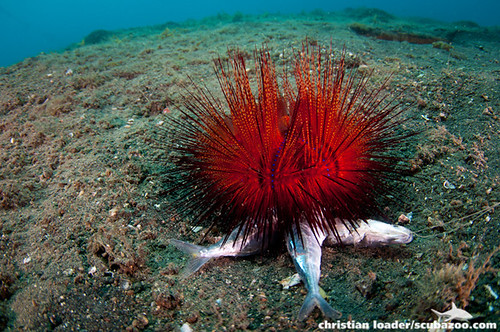 Blue Iridescent Spots! Its been speculated that these are photoreceptors but they've not been tested and its unclear exactly what their function is.. But they immediately stick out when observed on an otherwise bright red sea urchin! 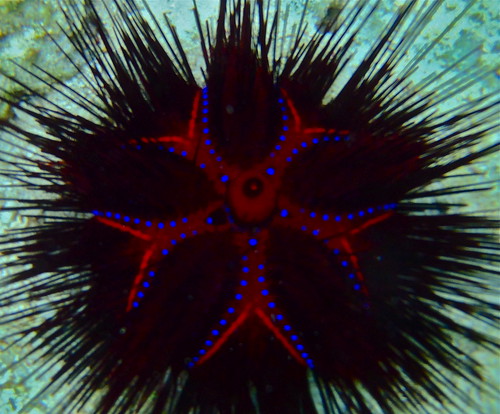 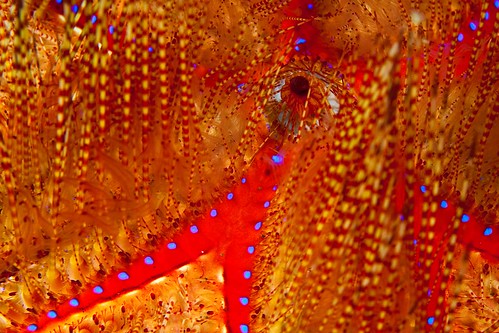 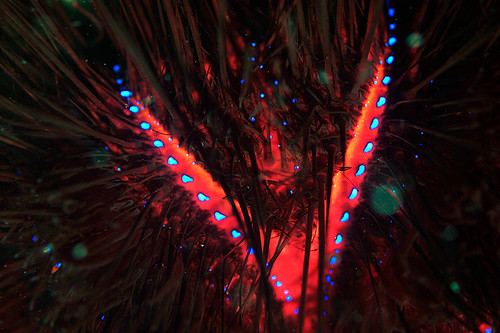 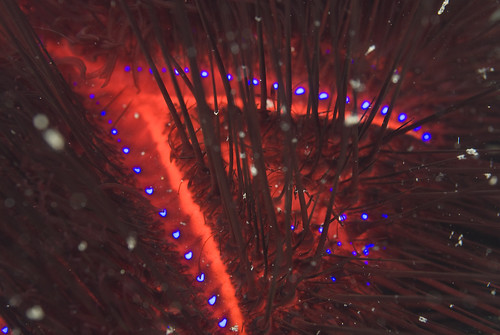 Spawning!
This speaks for itself. As with other echinoderms I've shown here (such as the sea cucumbers) just because you see white fluid being emitted its not actually clear what sexes of the species are present. The fluids likely represent BOTH sperm AND eggs.
Sometimes this species form large aggregations, which are most likely to help facilitate their reproduction and sexy time! 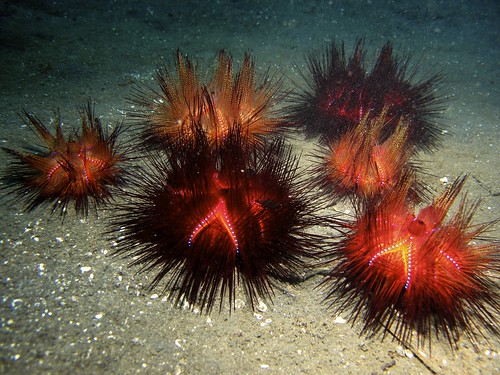 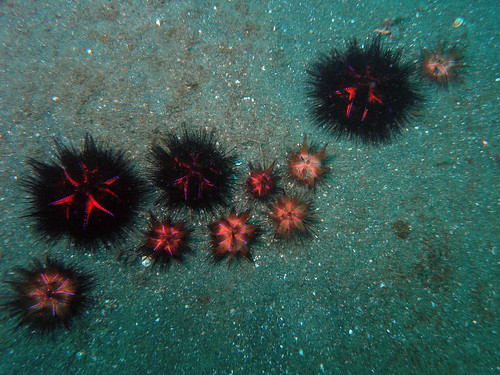 Astropyga moves surprisingly quickly!
While I haven't actually seen one of these alive and close up, its pretty clear that even for sea urchins they are capable of a surprisingly brisk sprints! and across some unusual terrains to boot!

That's quite a lot of coordination of spines and tube feet at play..

here's a bunch of them in what looks like a mating aggregation, moving en masse!

my first underwater timelapse from prodtv on Vimeo.

Crustacean Relationships!
Sea urchins are basically big spiny balls that seldom move and surprise! surprise! There never seems to be a shortage of OTHER, smaller animals that can take advantage of this as "habitat."

Crab Commensals!  These don't seem to be as bad as the crabs on Asthenosoma, (the proper fire urchins) simply because these don't seem to "dig" themselves into the urchin surface. Spines on Astropyga seem long enough to provide adequate protection as-is... 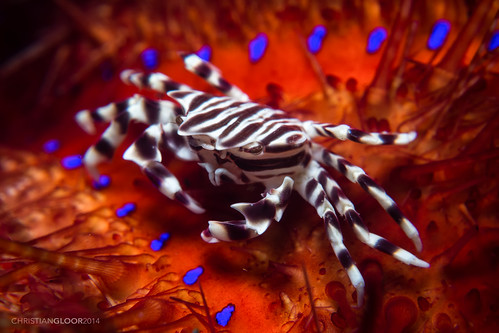 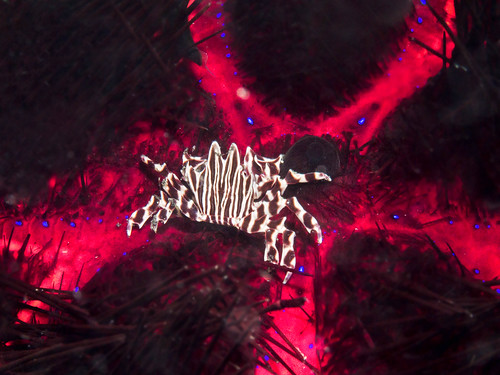 and vice versa?? Probably one of the most unusual things I've seen imaged by divers since Flickr and YouTube became a thing has been this.. Crabs in the family Dorippidae that PICK UP urchins, sea anemones and carry them on their carapace in order to use them as sort of a defense as they walk along the sea bottom. 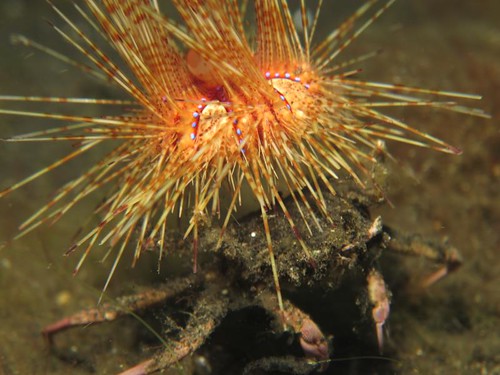 But why explain? When you can just watch...

...and of course.. POOPING!
And finally, one of the things that we LOVE to watch urchins doing? POOPING! Something that is arguably part of their namesake!  Here's the time I corrected New Scientist on their mistaken urchin pooping picture! 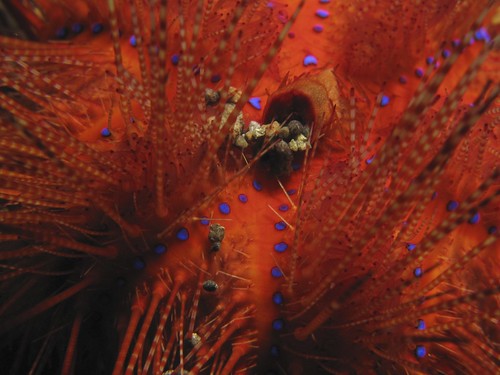 And of course there's pooping AND commensal crabs! TOGETHER. 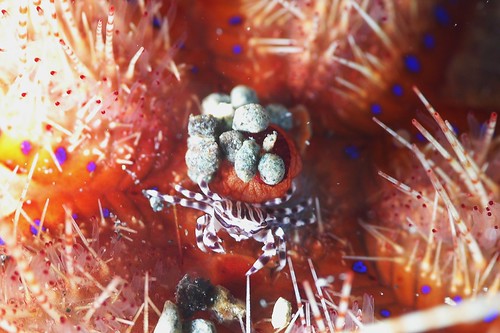