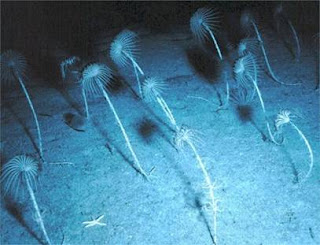 (Courtesy of C. Messing)
So, the other day, I was giving a tour and making the point that as much as the scientific method is a critical part of our analytical process, an important part of science is primary exploration and discovery. Something people seem to forget amidst busy times.

New facts or observations (some would say qualitative data-others would say "natural history") can inspire many new questions and a diverse array of hypothesis-driven studies. A simple observation can drive a host of inquiries!!

A case in point? Let's look a very interesting recent paper by Baumiller, Mooi & Messing 2008 which documents an observation that has repercussions for paleoecology, paleobiology, and broad evolutionary dynamics.

Cidaroids are unusual in having an specific kind of Aristotle's Lantern and in lacking skin on their blunt, thick spines. Most sea urchins (and in fact, most echinoderms) have skin covering their entire body.
This species occurs in the tropical Western Atlantic, specifically in the Bahamas. 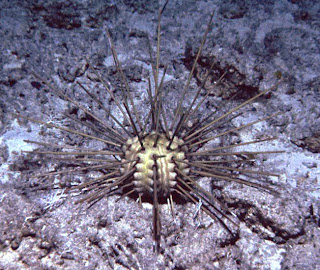 (Image courtesy of Dave Pawson, NMNH)
The stalked isocrinid crinoid Endoxocrinus parrae. I've already said a few things about stalked crinoids. When they are observed in nature, they can also be very abundant occurring in "meadows" numbering in the hundreds! (as seen above) Creating an alien seascape, very few people get to see in person... 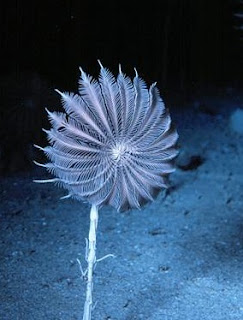 (Courtesy of C. Messing)
Bear in mind, that often, deep-sea invertebrates like this, very rarely if EVER get to be observed in the wild. So our knowledge of their life habits is negligible.

Getting to the Point:
Based on observations from the Johnson Sea Link submersible the authors watched Calocidaris FEEDING on Endoxocrinus!!!!

A sea urchin chewing on a stalked crinoid! An interaction never before observed between these two kinds of animals!
Ramifications?? Well, for one thing it might explain the recent observation that stalked crinoids CAN MOVE (i.e., escape!)

Also: stalked crinoids have been known to shed distal segments of their stalk..but up until now the explanation for that behavior was a mystery.

Think of a "lizard's tail" strategy. Stalked crinoids will jettison parts of their stalk to distract the predator allowing the surviving part of the animal to escape!!
Implications & Questions?? Many.


Finally, one of their most intriguing notions: Swimming in stalked crinoids (below) has been argued in the past as an escape/defense mechanism against predatory fish.

But "Doesn't a slow-moving, kind of clumsy looking swimming thing in the water column really just seem to INCREASE the chance that a fish would eat it??"


What if it was a defense mechanism against other SLOW benthic predators??? Sea urchins, starfish and...????? Think of the scallop using a jet blast to propel itself out of harms way when a starfish attacks.

With implications for over 500 Mya of evolution and ecological interaction.

All I can say is, that it is a sad situation when one echinoderm eats another.