A Day In the Life: Echinoderm Forensics

Today, a little bit of sharing about my professional life and a story about helping people with my taxonomic expertise.

Among the the skills I've found most useful (and necessary) in my profession is my skill in taxonomy-identification, classification, and all of the associated history which accompanies the knowledge about a specific group of organisms. In my case, the starfishes. Class Asteroidea in the phylum Echinodermata.

I am often consulted by a wide array of agencies, professionals, and interested persons to identify their animals from a wide variety of sources. Some from specimens, some from videos, and frequently from pictures.

Last week, I received an unusual request from a veterinarian via a colleague of mine (excerpt in part):

He had a case of a pet boxer that consumed a dried ornamental starfish,
proceeded to vomit and exhibit sustained seizures, and despite aggressive
supportive therapy over the course of about 18 hr, failed to improve and
was euthanized. They managed to remove one large chunk of the starfish
by stomach pumping, but radiographs showed that much of it remained in
the stomach. Surgery to remove the chunks would have been the next step
if it had not been euthanized. The dog was cremated without necropsy,
so the only sample that remains is the 2-arm chunk of starfish that was
removed by the stomach pumping. They are interested in determining whether or not the starfish was actually the culprit in causing the seizures.

While treating the dog they called some poison control centers and learned that some starfish can carry tetrodotoxin, and I see from some quick web searching that that is indeed the case, so it is plausible. Starfish poisoning wasn't covered in my veterinary toxicology course for some
reason. I figure the first logical step is to identify the species, then
see if we can find a marine biotoxins lab that might be willing to assay
the starfish tissues for tetrodotoxin and/or harmful algal bloom toxin

I suspect humans and terrestrial mammals very rarely consume starfish,
so there is probably not much opportunity to observe whether or not there
is associated toxicity. Unfortunately, with the prompt cremation, there is
no way to determine what else may or may not have been associated with the seizures. I have no idea what the stability of tetrodotoxin or other marine biotoxins is, but drying might not be too harsh on them. I also don't know if there might have been a preservative of some sort applied to the starfish that could be responsible, rather than the starfish itself, but I think they can just be dried, and it doesn't look like there's any shellac or painting on it. Can you identify it from the attached images? and if not would the identification be possible with the actual specimen in hand?

Thanks for any assistance you can provide.
Best regards,

Along with these pictures: 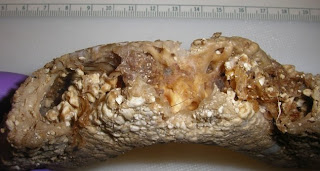 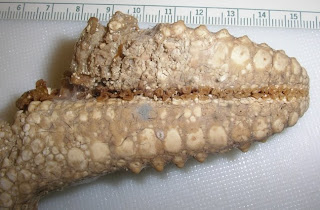 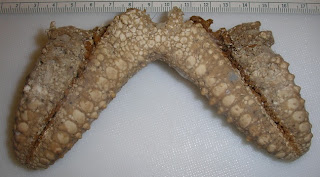 Most of my requests for identification are biodiversity related-so it was unusual to get one with a chewed-up, half-digested specimen and involved with a canine death no less!

I have over 10 years of experience with identifying starfish..and even so, its not easy to ID a species from pictures of fragments- but I got it: Pentaster obtusatus. A commonly encountered Indo-Pacific oreasterid that often makes its way into shell and curio shops.

Unfortunately, it was chewed up and swallowed by this dog. Many starfish contain saponins and other toxic biochemicals in their body walls..likely as a defense against predatory vertebrates. And much of the older toxicological studies "back in the day" report dogs and cats inadvertently eating starfish, such as this one, exhibiting similar symptoms, followed by death.
I was able to quickly report to the inquiring veterinarian about the likely nature of the cause of fatality and its toxicology.

There were certainly several unanswered questions here...but knowing the name of this poor beastie was an important fact in this case and I was happy to provide an answer that helped figure it out.
Posted by ChrisM at 6:40 PM

pssst... make sure you separate your labels by commas or else they all run together as one label

Excellent post Chris! An example such as this is what taxonomy needs to make more relevant to other fields! Have you considered writing it up as a case study for veterinary journal?

I would love to cite this in a paper I'm working on and would be a good example of the utility of taxonomy outside the community.

Hey Chris ! cool new blog ... I can't say i understand everything ;-P but very interesting nonetheless ...now I know why we do not eat breaded starfish !
I'm waiting for the Pestar post ;-) talk to you soon !