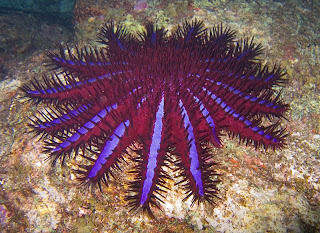 My esteemed colleagues over at Deep-Sea News have declared this week (April 27-May 3) "Coral Week" and have gone into insane 100% coral-all-the-time mode.

So at Dr. McClain's delicate urging I thought I would present a little somethin' somethin' on the echinoderm-coral intersection.

One aspect I should mention of course, is that coral reefs-both deep and shallow provide habitats for echinoderms. Here...I look at more direct interactions..and interesting aspects of those relationships....

Sea Cucumbers (Class Holothuroidea) & Crinoids (Class Crinoidea): As far as I know, sea cucumbers and crinoids don't really interact directly with corals other than as substrate or when they form habitats (as in tropical shall0w-water or deep-sea coral reefs). And if you don't believe me about cukes not eating corals..ask Dr. Seville Kent from 1883 (note: this made Nature in the 19th Century!!). So, not much on those groups here.

Brittle Stars & Serpent Stars (Class Ophiuroidea): There are quite a few ophiuroids that live on various corals. My understanding is that relationships are generally commensal, with the ophiuroid living in or around the coral (and/or sometimes sponges). Both in tropical shallow-water and deep-sea habitats. Examples include:

* Several deep-sea "serpent stars"(Phrynophiurida) i.e., those with big fleshy arms that split into massively branched arms such as this that often live on octocoral hosts.

Ophiuroid-octocoral relationships are quite interesting. And various aspects of this research are being studied, including
systematic relationships
sublethal predation
and other aspects of feeding ecology and reproduction.

Perhaps though, one of the most significant relationship between echinoderms and corals is that several echinoderms EAT coral!!

Let's take a look at some prominent corallivorous echinoderms, shall we? 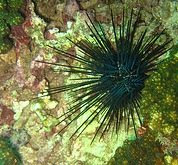 (images courtesy of Flickr)
One of the few non-starfish echinoderms reported to feed on coral..Diadema is a member of the family Diadematidae, which are recognized by their long sharp, needle-like spines.

Diadematids are widespread throughout the tropical Atlantic and Indo-Pacific occuring primarily in shallow-water reef habitats with some deeper members.

What's curious is that much of the review literature (citations available upon request) attributes coral as a food source, when it may actually be that much of the perceived "feeding" is in fact, grazing.

Only one paper-Bak & Eys 1975 reported feeding in D. antillarum with gut content reports but reported "scars" from coral heads as well as various outlining various prey species but that doesn't really convince me that feeding on coral polyps was not merely incidental.

Bah. onward to some REAL corallivores.... 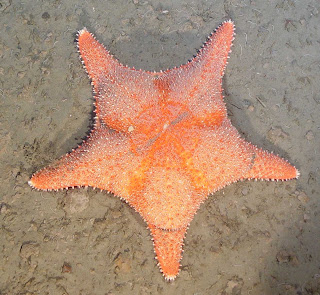 Hippasteria (and the related genera Evopolosoma and Cryptopeltaster) are large, heavily calcified starfish with big thick spines that live primarily in cold-water areas, in other words the polar/sub-polar or deep-sea settings.

There are about 25-30 species with members occuring in the Arctic, New Zealand, Hawaii & Japan (deep-sea), the North Atlantic, the tropical West & South Atlantic (deep-sea) and throughout the North Pacific.

and without getting into too much detail, I've seen these feeding on deep-sea corals suggesting that when present, they are probably important members of deep-sea coral systems. What role and how important they are to those systems remains an open question.... 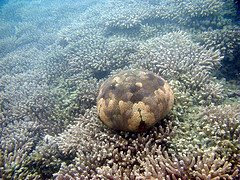 (images courtesy of Flickr)
A widespread genus with three species occuring throughout the tropical Indo-Pacific region. From Hawaii to India and the east coast of Africa. Varies widely in color and morphology but maintains its distintinctive swollen appearance. The name, Culcita, is latin for "cushion". 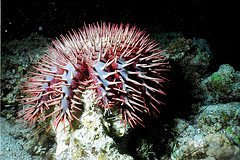 aka the Crown of Thorns Starfish or...COTS by some. The BIG one. A caveat here..this is a SHORT summary. Based on the amount of literature available on this animal, I could literally spend a whole frackin' WEEK just on the COTS.

Pursued, studied, and in many cases destroyed due to their perceived threat to shallow-water tropical reefs. Probably one of the most notorious, and as a consequence one of the best-studied, starfish in the world.

The COTS is widespread, occuring from Hawaii and southern Japan to the Pacific coast of Panama to the Indian Ocean on the east coast of Africa and as far south as the subtropical Kermadec Islands. Acanthaster varies widely over this range in color and morphology.

A whole book is devoted to the biology and ecology of Acanthaster planci. Much of my info here hails from this useful volume.

Acanthaster is a voracious predator of corals

Individual animals can ingest up to 6 square meters of living reef a year. 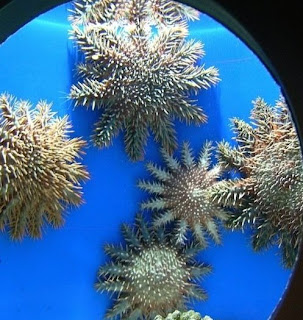 Acanthaster has undergone huge bursts in population (known as "outbreaks")
Accounts of these outbreaks have been estimated based on relative size based on catch records.
One study collected 8,083 individuals from American Samoa but surveys estimated that the total population to be 212,000 individuals!! (that's 26.5X as large!!)

Another study from American Samoa collected 486,933 but "so many thousand remained that no estimate was made of the proportions killed"

Interestingly, abundance can fluctuate by as many as six orders of magnitude within a year or two.
For example: Prior to late 1977, numbers of A. planci in American Samoa were of the order of less than 2 per year, as observed by "knowledgeable persons". By late 1977, HUNDREDS of THOUSANDS of starfish appeared on both sides of the main island!!!

These two issues combined have resulted in a LOT of COTS devouring coral and leaving dead white rubble in their wake...

So why the outbreaks? Different hypotheses have been advanced (I will caveat that there are probably others but these seem to be some of the two most prominent):
Other links of interest:
Long Term outbreak monitoring on the Great Barrier Reef can be read-about here

Controlling Crown of Thorns Starfish
Posted by ChrisM at 7:17 PM

Hello dear Ph Mah, I love the echinoblog!!!, but I think the image is Diadema mexicanum -not Diadema antillarum-, because the benthic cover in the photo reminds me the Pacific landscape where I work. I´m wrong?
Regards

Hi Chris,
I've studied Culcita spp. for many years paying particular attention to their eating habits. Yes they eat corals (mostly small Acropora and Pocillopora) when they are available, but more often then not they eat algae, sponges, tunicates etc, which is to say they eat organisms that compete with corals for space. This is especially so when corals are scarce, so arguably they contribute to coral recovery after coral mass mortality. I have ample evidence to support my contentions.

Easily, the article is actually the best topic on this registry related issue. I fit in with your conclusions and will eagerly look forward to your next updates. Just saying thanks will not just be sufficient, for the fantasti c lucidity in your writing. I will instantly grab your rss feed to stay informed of any updates. Coral frag