No..not starfish that eat people, but the other way around...

I was sent one of the two videos below. Many have perhaps seen fried starfish on a stick in various Asian seafood marketplace pictures, such as this one: 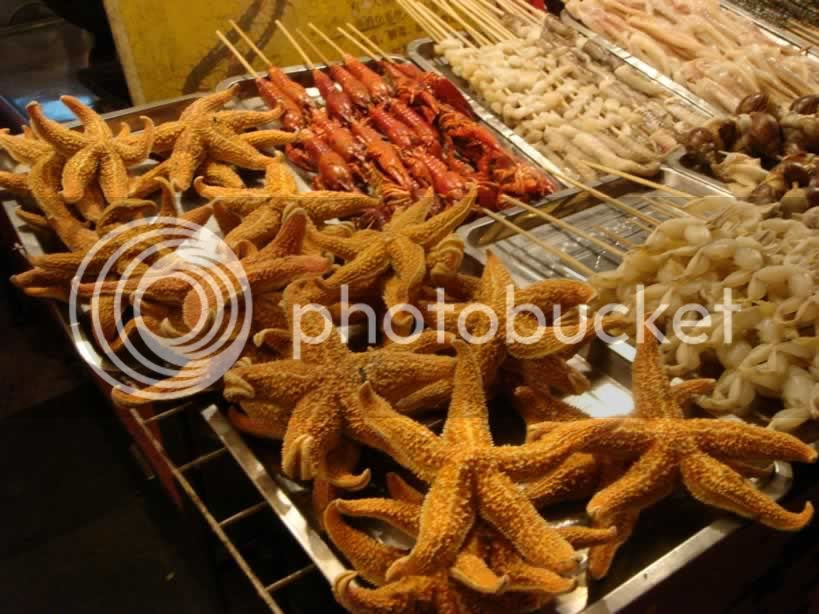 Taxonomy: From the video and from various pictures floating around on the internet, the species looks like Asterias amurensis, the North Pacific species of the well-known asteriid Asterias, which includes your well-known experimental lab rat Asterias rubens, etc.

Details: In addition to the video and pictures floating around on the internet, I have encountered two anecdotal accounts including:

*I have two packages of a starfish soup mix from Asia that apparently use the starfish as a component you add to dried fungus and boiling water.

*There were rumors when I visited New Zealand that people were using tube feet as part of clam dip.

Good Reasons why I would AVOID eating starfish:

* There's no meat. Mostly calcite. (Interestingly though, a note in one of the Youtube videos suggests that one eats the gonads or soft parts.)

* Body walls, of many, if not all asteroids are laden with toxic biochemicals, from saponins to tetrodotoxins. Many accounts report that feeding starfish to dogs or cats results in vomiting and the subsequent death of those animals.

* Some accounts-especially from Asia, such as this one, show that that some species which digest bivalves (e.g., Asterias amurensis, Astropecten scoparius, Asterina pectinifera) can actually convey paralytic shellfish poisoning.

They can come here to Melbourne and have all the Asterias amurensis they want. Haven't had a look recently but not so long ago, Port Phillip Bay was chock full of them.

Funny, I saw two recent "Andrew Zimmerman" shows ("Bizarre Foods") where he came super close to eating them. One turned up in the background and it looked like Asterias. The other was definitely not Asterias and he did take a bite...and seemed to not go for it.

I found your blog when searching for edible starfish! I'm writing a sci-fi yarn featuring a giant space starfish and was wondering if killed, would this creature be edible and then, what would it taste like?

Do you have any updates on this particular topic?

well, here was a website that documents some folks who eat the gonads from starfish:
http://www.amakusa.tv/enewshito.html

I haven't really seen any new papers that document eating starfish..although I did write this other blog about possible effects..

Eating an alien starfish? hmm...depends on what kind of starfish. For living taxa considerations include "is there tissue"? (i.e., meat). Most living starfish have poison in their tissue/body wall..and are at best, unpalatable. But that doesn't always stop people (or hungry animals).

Flavor would probably be salty to bitter...I'll have to think about it. Feel free to email me if you have more details to consider..

It tastes very similar to sea urchins commonly served at sushi counters which are literally cousins of starfish and sand dollars.
I guess it isn't as common to see it served as food though, because the amount of edible area is very small compared to urchins, and like urchins it is tedious to get through the hard shell, nor is it very pretty in presentation once opened and ready to serve.

AS for the poison? Well, as with almost all food, there are specialists who can professionally separate parts and not contaminate various parts of the meats in preparation, so you just have to seek the right sorts of people to try them in the most delicious method of cooking.