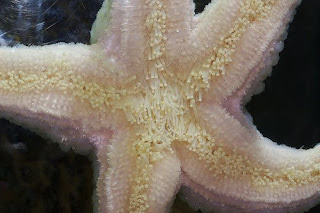 Imagine a giant animal that could get to be almost 2 feet across that could sling out tentacles and capture prey a FOOT away from itself!!!

One of the three species in the famous genus Pisaster (Family Asteriidae) which occurs on the western coast of North America. 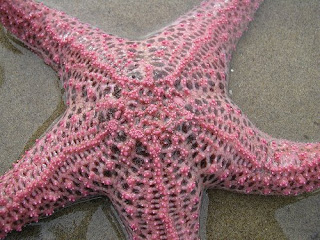 Pisaster brevispinus has two rather famous sister species: P. ochraceus, which everyone learns about when you study keystone species in marine ecosystems and P. giganteus, which is so striking that its hard to miss.

Pisaster brevispinus occurs between San Diego, CA all the way up to Alaska and can occur in much deeper water than its two shallower sister taxa.

P. brevispinus is a common inhabitant of SANDY BOTTOMS. 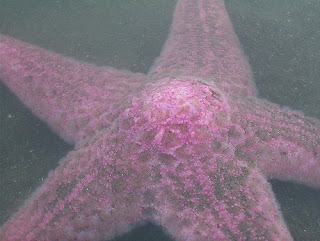 The Weirdness Pisaster brevispinus can HUNT for prey (usually bivalves of various kinds) in the TOP 40 cm of the sand!! That's easily about a FOOT and a HALF!!

HOW does it do that? It has LONG-ASS TUBE FEET!! And dunks them down into the sand! Like this:

P. brevispinus is recorded as being able to extend its tube feet into the sand THE LENGTH OF ITS ARM (measured from the center of the disk).

Small to average members of this species can have an arm length of about 6 to 8 inches..but in some GIANT members, P. brevispinus can reach arm lengths of up to TEN TO TWELVE INCHES (that means an overall diameter of almost TWO FEET!!) 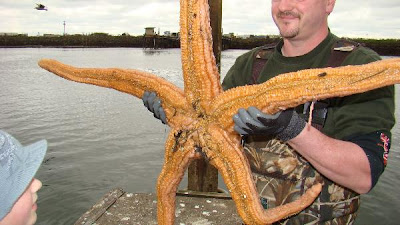 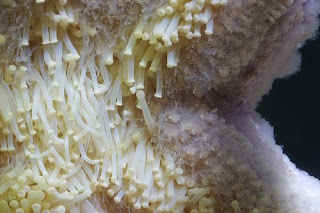 That means one of these things with a large radius, can extend its tube feet ALMOST TEN INCHES into the ground!!!Here we draw on the Echinoblog's extensive computer graphics department to show what this looks like: 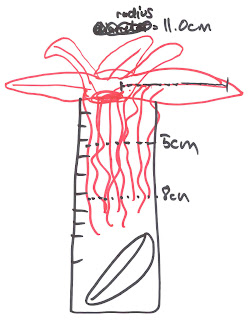 Shown here is a diagram of a P. brevispinus specimen with an 11 cm arm diameter showing an almost 8 cm reach!!!!

This species apparently uses its central tube feet in quieter times to hunt for deeply buried bivalves (clams, etc.) and when left to their own devices can get quite big. I've seen these at different aquaria getting almost two to three feet across.

What's even more amazing is that apparently, P.brevispinus can ALSO EXTEND ITS STOMACH LOBES OUTSIDE ITS BODY ALMOST THE SAME DISTANCE.

Velduizen & Philips indicate that it probably doesn't do this easily and only when the food is close to the mouth. But, still...think about it.

Giant Pink Starfish with long tentacular tube feet! What happens when they start getting tired of clams...what happens after that?

WHAT HORROR AWAITS US??? 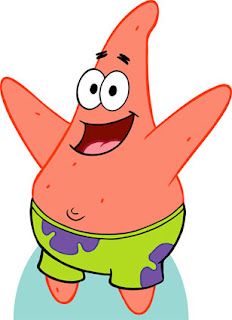 All of the information on this species says up to 2 ft. The one in Westport is well over 3 feet. All websites say up to 4 pounds and this one is 15! Is the Westport Sea star a different species or a record setter?

thanks! I'm actually waiting on info from that specimen.. I'll post it shortly..

I am interested to hear what you find out. Should I drive over to Westport to see it this weekend?

Did you ever get report back on this one?

Sadly.. I never did hear back.. but i have some further pix of other contenders..... I'll have to post those..