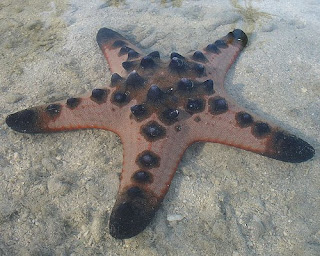 There's always been a lot of attention paid toward coral reefs and with good reason. Lots of tropical animals face environmental and threats from overfishing..especially in the days to come. Among them? The starfish.


Members of the OREASTERIDAE, are pretty conspicuous members of tropical-shallow water habitats in both the tropical Atlantic and Indo-Pacific. The Indo-Pacific in particular has a rich diversity of oreasterids, including Protoreaster nodosus and its relatives (e.g., Pentaceraster, Pentaster, Poraster, Culcita, etc.) 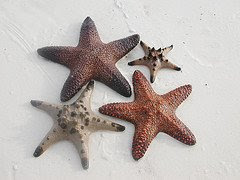 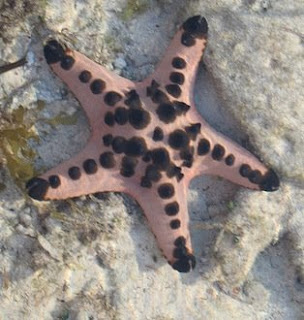 Also known as the "knobby star" or the "chocolate chip" star among many other names. A species collected primarily for the dried shell trade..but also for the aquarium trade and its ilk. Robert Scheibling and Anna Metaxas have authored a recent paper which describes abundance, distribution, reproduction and other aspects of biology of this species, including notes on feeding. Their study assessed a pristine population of P. nodosus in Palau. Summary Factoids of this post are based on their data:

Predation The big spines? Probably defense against predatory triggerfish. Apparently fish-bite scars were reported. It turns out that fish predation is a probable selective pressure on these animals across their size range. 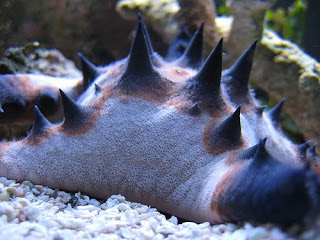 Feeding P. nodosus is a microbial/microalgal feeder. That is they evert their stomachs to feed on REALLY SMALL biotic materials-meiofauna, algae, etc. which live on seagrass and sediments exisiting in their natural habitat. 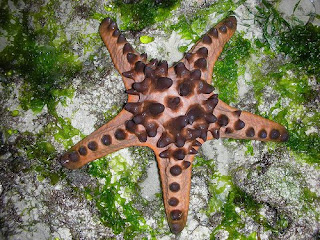 I have found reports in numerous pet and aquarium accounts that this species will feed on clams, sea urchins, and other various kinds of fed or scavenger-type meat. Unfortunately, there are also widespread reports of this species DYING in captivity, days to weeks after purchase-probably due to starvation. 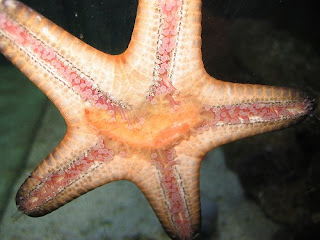 This, in conjunction, with the fact that P. nodosus has not yet been observed feeding on meaty tissue in nature suggests that in all liklihood, the exact nutritional needs these animals require to survive is not easy to mimic in an artificial environment.
Many of the differences in density and distribution between populations MIGHT actually be related to the availability of food and other edibles. Population densities might be higher relative to areas where microbial films, and organic food particles are more abundant or of higher quality. P. nodosus has been considered a "common" species-but how many of them are there? And what factors dictate those distributions?? In the densest regions, P. nodosus was present at 50.8 individuals per 100 sq. meter (this was in the seagrass bed).

In some cases, some individuals had moved 2-3 meters (1 meter=3.3 feet) after only one hour! This suggests that these populations rapidly re-adjust to a random distribution. 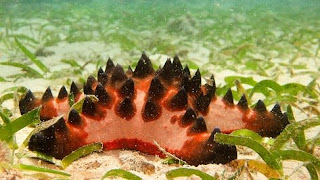 Based on the correlation between the relative size, patterns and high densities-it turns out that seagrass beds act as a nursery for smaller P. nodosus, which can eventually grow up to 30 cm (little over a foot) in diameter! Populations of these juveniles are thought to feed on seagrass beds and then move out onto the open sandy fields to forage. 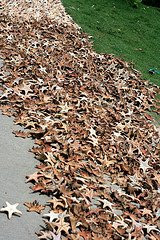 (yes, that's P. nodosus from the Philippines being dried en masse for a wholesaler)

At one time-the buffalo roamed freely over the American plains....taken recreationally and for any number of frivolous reasons...from a seemingly endless population. 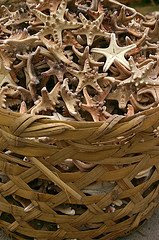 Good day, I'm a thesis student conducting a study on the movement of Protoreaster nodosus along tidal cycles. I was wondering about your blog on the P. nodosus, do you have any sources on the conservation issues of the sea star? It would help my study a lot. Thank you!

I have at least one other post on this.. if you search using the species name. But if you Google Scholar search the species name..there are at least two papers on the reproductive biology that are germane. One by Bos and one by Scheibling.