This week I am visiting San Francisco to tie up some research loose ends at the California Academy of Sciences and get in some R & R. 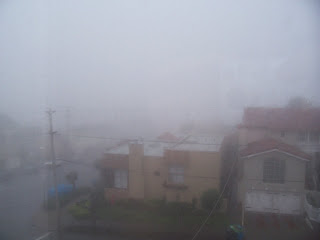 Note the substantial difference in August weather in San Francisco, CA !! vs. the very sunny, hot, 90ish degree, humid weather one encounters in Washington, DC!! That is actual FOG. I don' t get to see REAL fog any more. So..I'm jazzed to have it around this week!

The New California Academy of Sciences 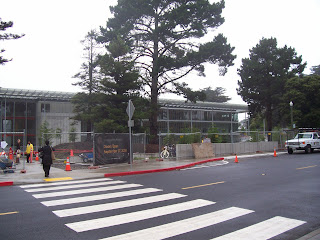 The Academy is just recently returning to its historic home in Golden Gate Park after about 6 years or so in downtown San Francisco at an interim facility. The new building is a fantastic engineering feat! And you can read about it everywhere, including Wired , USA Today, and heck! Even Popular Mechanics! 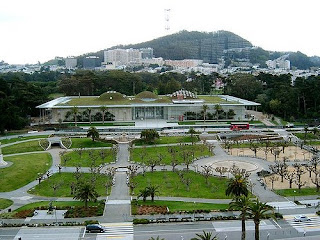 Although there has been a LOT of PR, much of the internal details are still hush-hush. But here's a snippet. They introduced two of the alligators (one of which was a rare white, albino alligator speceis) to their new Swamp Pit Exhibit while I was visiting. 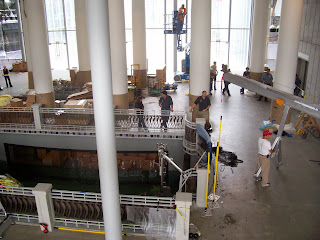 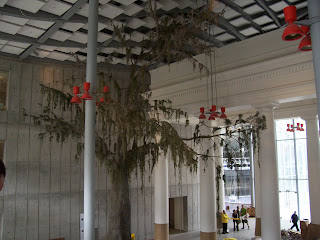 I have a long history with the Invertebrate Zoology & Geology Department at the California Academy of Sciences. My masters degree research was performed here in conjunction with San Francisco State University.

Back in 1995 or thereabouts, I began volunteering in IZ & G and later began working as a "curatorial assistant" and ended up sorting, identifying and curating the entire asteroid+ophiuroid collection. So, you could say, I "cut my teeth" here... 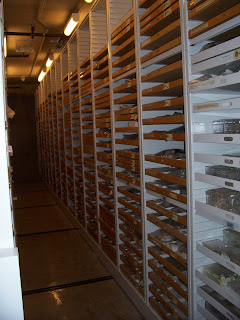 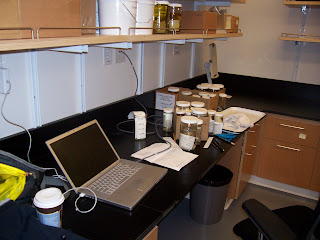 I also visit to enjoy professional discussions with the first-class research staff, including my former advisor Dr. Richard Mooi, one of the world experts on sand dollars, sea urchins and echinoderm phylogeny in general. Here's a shot from his new office! 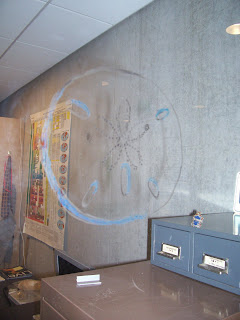 Other luminaries in the department that I always enjoying talking to:

Terry Gosliner, who works on the systmatics of nudibranchs-primarily in the Indo-Pacific but his work carries him all over. Terry's opisthobranch lab is the largest and one of the most productive for his group in North America.

Collections staff: Bob Van Syoc & Jean deMouthe-Collection Managers, Liz Kools and Chrissy Piotrowski (collections technicians) are also ever-welcome to put up with my demands and listen to my off-beat stories!!

Collections
The CAS-IZG collections have an interesting mix of fossils, minerals, and of course, one of the largest collections of west coast and Pacific invertebrates to be found anywhere in the world.

Echinoderms make up a huge chunk of those collections and many of their holdings are closely tied to the history of marine biology and natural sciences in California.

Here for example, is a specimen of Heliaster kubiniji, an asteroid from Baja California collected by Ed "Doc" Ricketts of Cannery Row fame. 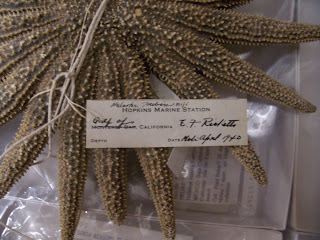 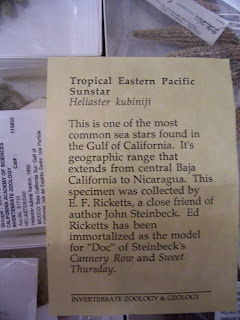 Echinoderm holdings are strongest for fossil & living echinoids and asteroids with good collection representation for holothurians and crinoids. Most of the fossil collections for echinoderms is relatively young, but there's some older material available. Click here to check out their online collections database. 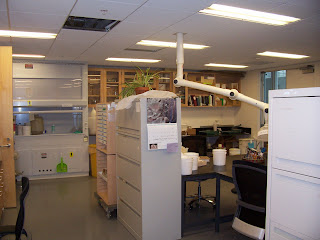 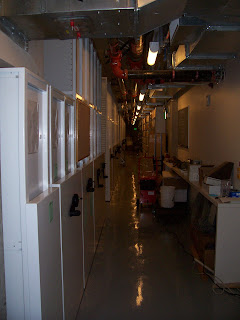 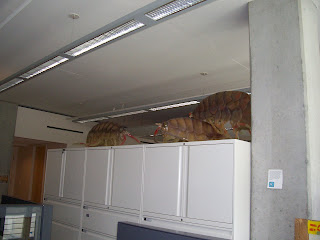 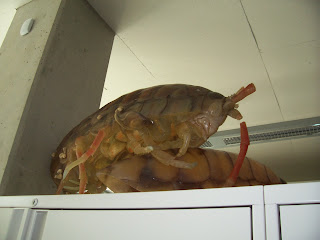 I'll post a few more pix over the next few days!!
Posted by ChrisM at 2:41 PM

Glad to see your enjoying the foggy weather back home. I can actually relate, I am having a hard time getting used to the hot sticky climate here in PR. Difference from DC is that everywhere you go there's AC. :P