I have discussed in past posts why dogs should not chew on oreasterids.... 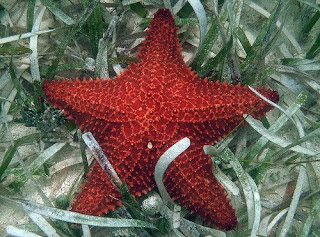 Oddly enough, this has come up again in the Associated Press...

ST. GEORGE'S, Grenada (AP) — Tourism officials on the Caribbean island of Grenada say they are concerned about dog owners snatching starfish out of the sea and throwing them like flying discs for their dogs to catch.

Russ Fielden is president of the local hotel and tourism association. He says officials have received several reports of the practice and are launching an education campaign to stop it.

Fielden said Saturday that treating starfish this way is "cruel and should be strongly discouraged." He said the sea creatures are being left to die on the island's popular Grand Anse beach and also are creating a foul smell.

The species is almost certainly Oreaster reticulatus (Oreasteridae). The practice of throwing the starfish is certainly not good for the starfish but dogs eating them could very likely end up poisoned or choking to death.
Posted by ChrisM at 10:14 AM

How quickly those Grenadians forget. We invaded once and we can do it again.

They interest me, and I know very little about them ...

Startrackers (startrackers.blogspot.com/) is monitoring a population at Cyrene Reef in Singapore (which is sadly under threat by development).