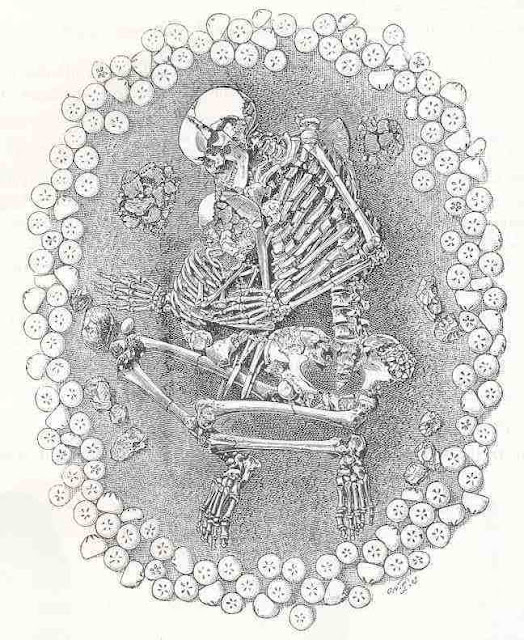 Today's Echinoblog is inspired by the picture above. The original caption from Vol. 5 (1) of the Mortensen Monographs reads:


Skeleton of woman and child, surrounded by a wreath of sea-urchins, apparently Micrasters, found in a tumulus at Dunstable Downs, N. of London. From Worthington G. Smith. Man, the Primeval Savage, 1894.

So yes, what you are seeing is a ceremonial grave arrangement surrounded by fossil sea urchins!

Fossil sea urchins have played important roles in the early history of humans in various cultures...Today, let's look at a few of the better known ones..... (btw.. pt. 2 of this topic is here)

The sea urchin in question is Micraster, a fossil "irregular" sea urchin which occurs from the Upper Cretaceous to the Early Tertiary in Northern Europe and Africa. 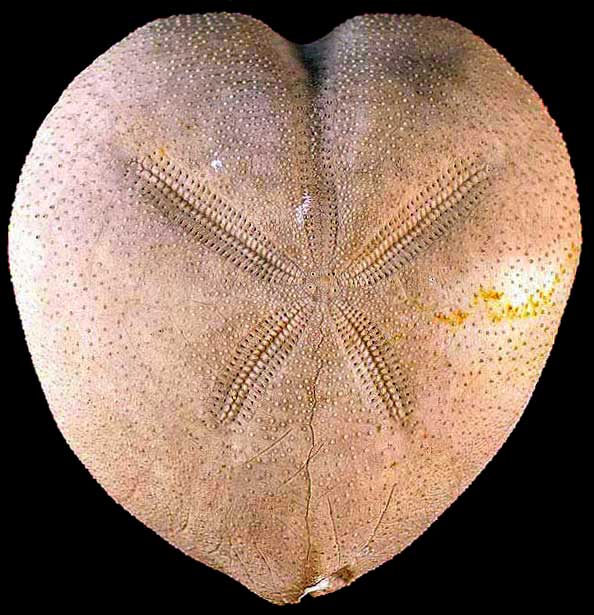 (image from the BMNH Echinoidea database)

Fossil sea urchins and other echinoderms occur widely throughout Northern Europe and were apparently used quite frequently in several Mesolithic to Early Bronze Age human communities.

1. "Thunderstones." Based on one account, it was believed that the "thunderstones" (i.e., Micraster and others...) had arrived in a thunderstorm and that it served as protection because 'where it had once struck it was not worth coming again'.

Extended notions of thunderstones believed that these followed ONLY after a "crashing thunderclap" and that the stone's landing created the noise!!

Others thought that thunderstones 'sweated' when it was certain that a storm was arriving.

Thunderstones were also made into axes and kept on pantry shelves because they "kept milk fresh and caused plenty of cream".

For example, some such as the oblong irregular urchin Echinocorys were called "Fairy Loaves"

probably due to their resemblance to loaves of bread.. 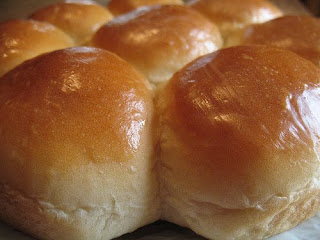 A neat account of the role of these urchins as "Fairy Loaves" is presented by the BMNH. An excerpt from their essay on the subject:

The resemblance between these echinoids and round loaves inspired people in north-east Suffolk to place them as charms by the hearth in the hope that the baking bread would be influenced by the fossil's loaf-like shape. It is said that families who kept fairy loaves in their houses could ensure they would always have bread.
Failure of the weekly bread to be properly formed was attributed to witchcraft against which Fairy Loaves had protective powers. The powers given to these fossils underlines just how vital bread and breadmaking were to daily life and village economy in Suffolk during times gone past.
The fairy loaf in Suffolk was also called pharisee-loaf which at some point became facy-loaf. Farcy is a disease in horses and it has been suggested that the fossils were also used as charms by farm horsemen .

In my neck of the woods (Dorset in SW England, aka "the Jurassic coast"), the term "thunderbolts" referred to fossil belemnites. Interestingly, probably because of the elongated and pointy shape, they were thought to be a physical manifestation of lighting rather than thunder.

The other local fossil with a common name was a fossil shell known as a "devil's toenail" - its shape makes it clear why.