A look at one of the world's rarest starfish!

As many of you may have realized, I was away for about two weeks on holiday travel...see San Francisco, hang out with my colleagues at the California Academy of Sciences..have some dim sum..(*mmmm..dim sum*), so FINALLY...all good things must end and I return to DC to find THIS splendid specimen awaiting me... 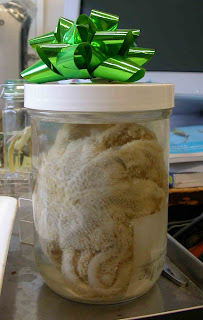 Several months ago I had arranged for a loan from the TePapa Museum in New Zealand to examine a specimen of a rare species of deep-sea starfish that had been discovered from the SubAntarctic. (Thanks to my colleagues at the USARP for arranging to bring the specimen back to the US!)

The specimen is a member of the MYXASTERIDAE, a group of truly deep-sea (1000-3000 m) starfishes, which is one of, if not, the rarest group of starfishes in the world. Nine species in three genera are found in the Atlantic, Indian and the Pacific Oceans. 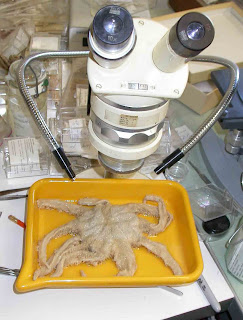 What makes any animal rare?? A combination of abundance as well as frequency of occurrence.

When most people think of the rarest deep sea echinoderm/star shaped thing, many automatically think of the so-called "sea daisy" Xyloplax which I have covered here and here.

What makes myxasterid starfish MORE rare then Xyloplax? While its true that Xyloplax has only been encountered once or twice every 15 years..there are actually about 100 specimens of each species known.

How many myxasterids are known? 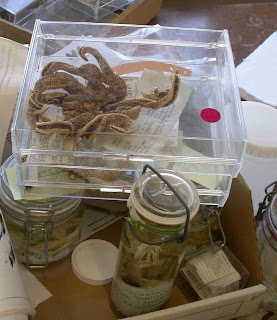 But of course, there is ALWAYS more to the mystique of rare animals then their rarity.

Morphologically, they have an "intermediate" body form between two very evolutionary successful (and familiar) groups of starfishes:

the SOLASTERIDAE or sun stars: 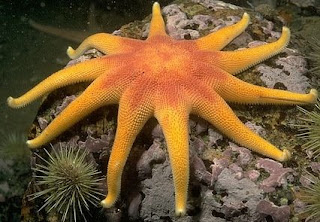 and the PTERASTERIDAE or the Slime or Cushion Stars. 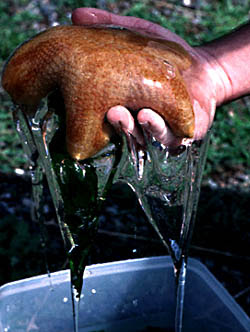 So, you have a starfish with multiple long-arms IN ADDITION to structures that ostensibly enable it to project the huge amounts of mucus that pterasterid starfish produce?

In fact, the type name "Myxaster" comes from the Greek Myxa for slime and of course, "aster" for star. (note that this name is similar to the hagfish name Myxine...)

Plus, you have a really SOFT slimy body, covered by fine hyaline spines on a creature that is seldom if ever encountered and you have yourself ....a mystery....

Do I have a new species?
What do they eat?

Are they related to the starfish species everyone thinks?

Are they ACTUALLY really rare??

A great way to kick off the New Year! Happy 2009!!
(and a special thanks to Tiffany, ChrisG, and Jen for encouraging this post!!)
Posted by ChrisM at 10:01 AM

So, what exactly do the starfish do with that huge quantity of slime???

Only they know for certain. :-)

I found your interesting blog while searching for a very deep sea star fish. I am a wildlife poet, and I want to find a starfish which would not be exposed to light. I know that they have light 'spots' which are sensitive to light. But I want one that lives in the total darkness, possibly in an abyss, and one which is star shaped.

As you are an expert, do you know if there is one?

there are scores to hundreds of species that live in complete darkness and which are star shaped. But I'm not sure what other aspects you are looking for that answer your question...

Well..sorry I took so long to get back to you!

It doesn't matter too much.

The poem is about a starfish, or sea star, so any star-shaped animal will not do, I'd like it to be an echinoderm.

Definitely 5 points so it is star shaped. If there is one without sensitivity to light (which might happen I guess in the very deep) that would be good.

Definitely living too deep to ever be in the light.

Perhaps something of which there are pictures, easily available, so that it can be drawn by an artist, as it will be for an illustrated book. Nothing with too complicated a body pattern.

Does that narrow it down?!

I can send you my e-mail address if it is possible to do so without it being public, so you can e-mail me, and I can e-mail you the poem.

Or is there a way of me sending it to you on here?