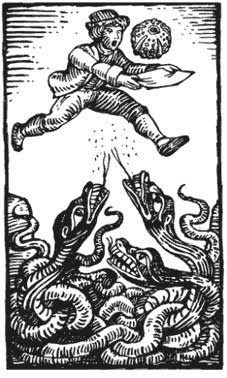 So..whilst writing up the account earlier this week (go here to see pt. 1 about urchins in folklore), I hit a treasure trove of information on the role of fossil echinoderms in historical folklore! Here's a few more interesting bits about echinoid fossils from Northern Europe!

1. Sea or Snake Eggs. Many sea urchin fossils (these look somewhat like cidaroid urchin tests) were believed to have magical healing powers or other supernatural properties. 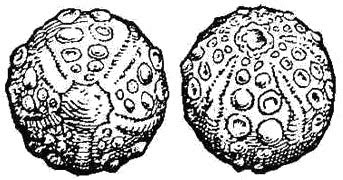 and one such story originates in Pliny's book Natural History as described in Oakley (1965):


According to an ancient Celtic tradition innumerable snakes twining together at mid-summer make a ball out of froth which they exude. It was called the ovum anguinum. If it could be stolen from the snakes it was an object of great magical power. It was said to be covered with a crust having excrescences like the suckers of a cuttle-fish. It possession ensured success in battle and disputes.

Further info on the whole snake angle can be found on this French website and the British Museum has a solid summary here.
From the accounts I could find these "sea eggs" aka "chalk eggs" or "snake eggs" could be used for a vareity of remedies including
Apparently, the role of fossil sea urchins was not limited to Western cultures..Mortensen in his monograph also records this account:


It is of the greatest interest in this connection that some similar religious superstition with regard to fossil sea-urchins appears to exist in recnet days in India. Dr. Eigil Nielsen informs me that at a party in New Delhi a lady told him that in some places in India people place fossil sea-urchins on house-altars, adorn them with flowers, which must be put on fresh every day-otherwise some misfortune will happen. I have till now not succeeded in getting exact information about this matter.

2. The oh-so delicately named "Jewstone"
One kind of fossil sea urchin, Balanocidaris (from Jurassic and Cretaceous limestones) has very peculiar shaped spines. These were so-named because they were "commonly" obtained from Judea. (altho they were also called "petrified olives")

(images from the BMNH echinodea database).


Their shape was strongly suggestive that they would serve as treatment for bladder-related medical problems in accordance with "established magic principles"!! 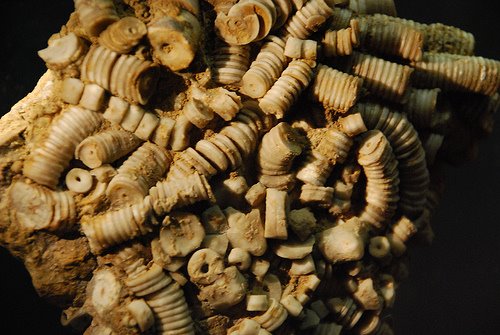 And of course, what kind of fossil record would we have without crinoid columnals? These were commonly used in the Bronze Age as beads.

In Germany, these were known as Bonifacius Pfennige or St. Boniface's pennies and were used as "fairy money" (whatever that happens to be). And in the North of England, they have been known since the 17th Century as St. Cuthbert's beads as indicated in this passage from Scott's Marmion (as recounted by Oakley, 1965).

But fain Saint Hilda's nuns would learn
If, on a rock by Lindisfarne,
Saint Cuthbert sits, and toils to frame
The sea-born beads that bear his name:
Such tales had Whitby's fishers told,

Part 1 of this topic can be found here