Brittle Stars that live in Jellyfish!! Ophiuroids that Reach for the Sky! 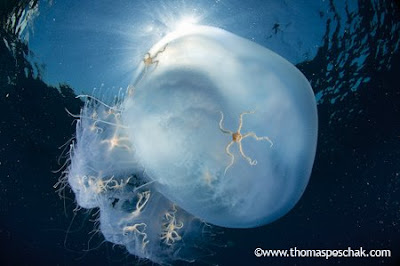 
So this week..I've managed to pull up a pretty weird topic even for me!

Brittle stars that RIDE on JELLYFISH.

yes. that's right. Ophiuroids that "hitch-hike"!!
(much of this will be from a paper by Loisette Marsh in the 9th IEC and a recent review by Kanagaraj et al. 2008)

The species, Ophiocnemis marmorata (Ophiotrichidae), lives throughout the tropical Indo-Pacific, including (but not limited to), Africa, Madagascar, philippines, southern China, Australia and India. This species does apparently live free from jellyfish and has been recorded from soft bottoms (sand and mud)

(thanks to Sue Spark for scanning these into her website many years ago!)
Its not quite clear HOW these brittle stars get INTO jellyfish in the first place! Possibly they settle as larvae..but its apparently on quite a few species of rhizostome jellies, including


Cephea cephea This image shows Ophiocnemis from the mouth arms of a specimen in Shark Bay, WA.

(thanks to Sue Spark for scanning these into her website many years ago!)

Rhopilema sp. Based on the locality of Mozambique, this is probably O. marmorata on Rhopilema nomadica. This also is a good time for me to mention why the increasing availability of nature photography is such an incredible asset to biologists everywhere. I'm pretty sure that the image has captured a novel occurrence maybe even a new one for this region... 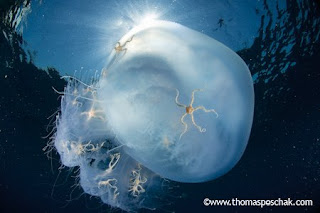 If one looks closely..one sees that its not just one or two but MANY brittle stars along for the ride!!

Oral arms are the long extensions which hang off the bell around the mouth...Curiously, a panoply of miscelleous critters live in and around the oral arms.. presumably to take advantage of the jellyfish feeding... 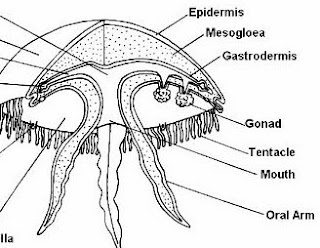 But...WHY??
and ya' know...that's a good question. So far two explanations have been offered...

1. Food & Protection? Ophiocnemis and other ophiotrichids are small particle feeders and have a great many spines all over their body. They live in and around the oral arms. Perhaps the pelagic larvae, known as an ophiopluteus, which looks like this:

Is attracted or settles in and around the mouth or the animal in general? Could they be attracted to currents? Or some other physical feature?? Protection until they get larger?

2. Dispersal via 'rafting' Adding a further layer to all of this? Not all of these live in jellyfish. In fact, its been suggested that only smaller ones live on jellyfish, suggesting that they eventually have to 'fall off' the ride..
But Ophiocnemis certainly gets around! Australia, India, Mozambique-all over the tropics! and on a great variety of jellyfish hosts!

This is one of those weird and wonderful things about echinoderms! Sometimes just knowing that it does this weird frakking thing is just the beginning!!!
Posted by ChrisM at 3:42 PM

Education 101!
Thank you for sharing!

I'm in Rebecca Johnson's Marine Invert Zoo class and i was wondering if there are any other examples of echinoderms living in symbiosis with other cnidarians? and are the brittle stars parasitic or commensal?

Hi, Chris I am also in Rebecca Johnson's invertebrate biology class. Is there a chance that instead of thinking they are using the jelly fish as transport or protection that maybe they just happened to be there by accident? And if not how do the jelly fish react to all these different inhabitants?

In response to Anthony M: It would be a pretty common accident, because this has now been reported many times over the years. I also know of unpublished reports. Its always the same species of brittle star. The large numbers of them also suggest that they actively seek out the jellyfish.
To mattmungo: to my knowledge nothing is known about the problem of stinging and I don't know how venomous these jellies are. Brittle stars are slimy and perhaps can tolerate the stings. As to when they know when to jump ship, they probably reach a certain size at which they perhaps don't get enough benefits from being on the jelly anymore. Maybe they need to away from the jelly to spawn or their eggs would be eaten by the jelly. But that's just speculation from me.
Sabine Stöhr, ophiuroid specialist

Hi Chris, I think the other critters on the jellyfish look like marine midges Pontomyia.

Cool! thanks for pointing those out!