Video & Images from the Census of Marine Life Big Wrap Up! 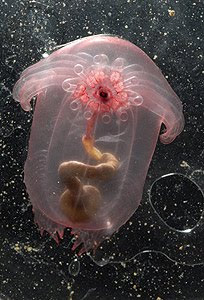 So, the big Census of Marine Life is racing towards its final year in 2010 and a big end-of the year press release has hit the media, including the video below!

If ya' skip over all of the jellies and other non-echinoderm (but still pretty cool) animals, towards the end is a GREAT video of the swimming sea cucumber Enypniastes from the Gulf of Mexico!! (shown above):


There's been a flurry of "best of" type photos, including this cool shot of a bunch of brisingids (Novodinia spp.) and a goniasterid (looks like Evoplosoma) perched on a bunch of deep-sea corals in and around New Zealand (>1000 m based on the original captions). 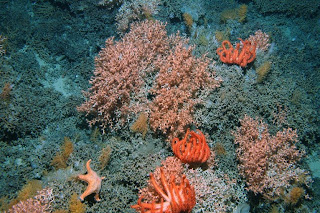 Its a light Echinoblog week but here in the US, its Thanksgiving week, and everything is just a little bit slower! Especially with everything getting colder and darker!

There will continue to be sporadic, light posts this week..with next week back to "normal"...