The Basics: How to Tell Sea Stars (Asteroids) from Brittle Stars (Ophiuroids) 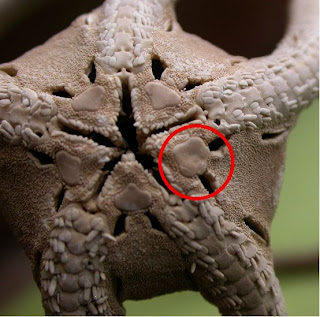 So, for various reasons, I thought I would do something a little unusual today and actually delver into some basic "how do you tell the difference between x and y" type stuff today. Why? Especially when you can find these sorts of characteristics listed in any Invertebrate Zoology text book?

A confluence of things:

1. Its November. And all over the country, bunches of Invertebrate Zoology students are probably hitting the "Echinodermata" part of their class by now. Let's make it easier for them!

2. Certain high-traffic informational websites, which shall remain nameless, seem to have MIXED UP the difference between asteroids (starfish, sea stars) and ophiuroids (serpent stars, brittle stars, basket stars). And SO, I feel its about the right time to make this information more WIDELY available...

So, here's some basics!

Starfish belong to the Class ASTEROIDEA . When you look at the roots words "Aster" means STAR and "oid" literally means "resembling" or "like"..So scientific term translates to "Star-like". 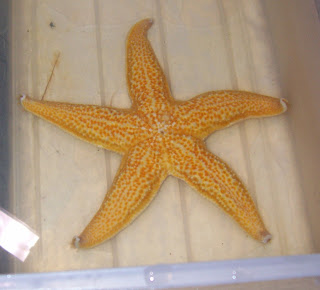 In the truest sense, the 'common name" is ASTEROIDS.

But of course, these are also referred to by a variety of names, so that they are not confused with asteroids in space!:

sea star. starfish. In Spanish: estrella de mar. In French: etoile de mer. In Japan, they are called hitode which alludes to the name for "hand" or "palm".at about Ophiuroi? 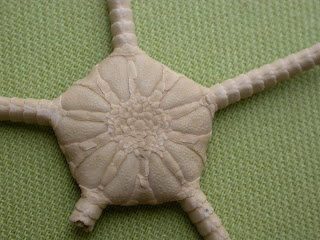 The given name for ophiuroids is a little more indirect. The class name "Ophiuroidea" refers to "Ophios" which refers to the arms as snake or serpent and "oidea" which means "resemble" or "like"...probably in reference to the arm shape and/or behavior of the animal when alive.

The resemblance to asteroids was noticed early on, of course. And several early designations of these animals actually refer to them as "Asterias" which is the name later tied specifically to asteroids.

1. The Madreporite or Sieve Plate. You know that offset "hole" that you see on starfish like this one?

This plate is thought to serve as (at least) one place where water enters the internal body cavity of the animal. ALL echinoderms have a madreporite-but its location and shape is modified to one degree or another.

In asteroids the madreporite (also called a sieve plate) is located on the top or aboral surface as indicated by the red circle. 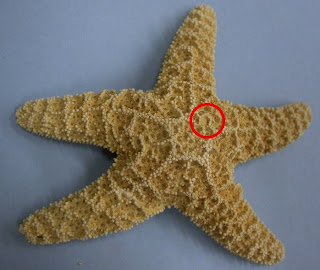 BUT in ophiuroids (brittle stars and such) the madreporite is located on the BOTTOM or ORAL surface. As seen here:

2. Tube Foot Groove in Asteroids (starfish, sea stars) is OPEN. Although the degree that this groove is open varies, it should always be open to the outside. The tube feet emerge from this open groove and lead into the mouth. 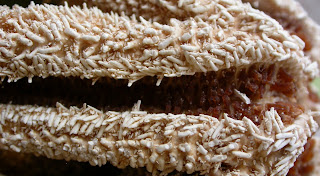 In contrast, such a groove is ABSENT in ophiuroids (brittle stars). The oral surface of the arms is covered over with a "ventral" plate. The tube feet can emerge through small openings but they are NOT open to the outside in the way that asteroids are.... 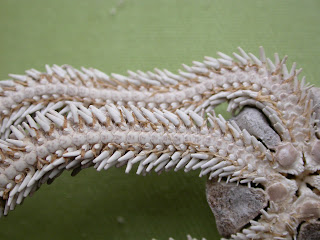 3. The Fundamental Structure of the arm is DIFFERENT.
In asteroids-there are internal ossicles, which act as sort of support struts. The TUBE FEET emerge through these struts and emerge into the tube foot groove.

Here is a cut away showing these internal ossicles called AMBULACRALS which run down the radius of each arm. These ossicles join and form a sort of rafter-like formation that sit OVER the open tube foot groove (above). So, the tube feet drop down through the ambulacrals and emerge in the tube foot groove.

Ophiuroids actually DO have these structures, but they are modified quite differently into solid forms that resemble vertebrae (i.e., the bones in our spine). 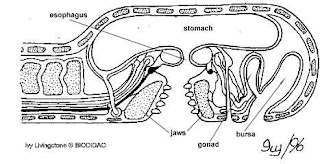 In ophiuroids, these vertebrate are tightly enclosed by additional plates that tightly cover over the surface of the arm, including the bottom (see above). Tube feet emerge on the bottom, but only through special pores and NOT through the corresponding ambulacral ossicles.

4. The Mouth and associated skeletal parts is different. At this point, I can start to get into a whole bunch of complicated skeletal jargon associated with the skeleton that forms the mouth frame in a starfish (aka an asteroid-seen here looking down through a mouth).... 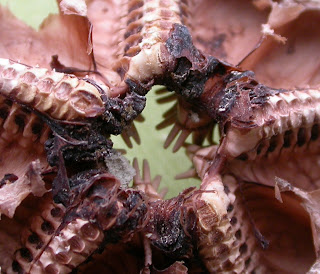 versus the one that forms the mouth of an ophiuroid... (seen here looking at the oral surface up into the mouth). Basically, there's a WHOLE BUNCH of changes in the skeletal architecture surrounding the mouth, as its directed towards a substantially different way of life...


(note that brittle stars don't drop an eversible stomach out of their mouth!) 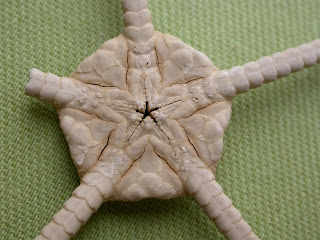 5. The Overall Body structure is different. The arms and disk of a starfish tend to be confluent with one another....Plus, the body cavity between the arm and disk is pretty open.

In brittle stars, the arms and disk are sharply set off from one another. The disk is a distinctly separated structure from the rest of the arms.

Asteroids and Ophiuroids are DIFFERENT but closely related.

There are literally, whole books, papers, and multi-year studies written on the subject of which characteristics are used to define the definition of "asteroid" versus "ophiuroid" (often in relation to older fossil forms) and it's important not to call one the other!! (even with common names).
In the truest sense, Ophiuroids are not " sea stars" or "starfish".
Posted by ChrisM at 9:16 AM

woow! that's great chris,the whole stuff of the content about differences between asteroidea and ophiuroidea is now clearly known to me.Thanks a lot for the simplification i am a first year student pursuing a degree in education science (biology and chemistry) at the University of Embu,Kenya.My email adress is labanwekesa8@gmail.com

Thank you! So much makes sense now concerning observations and also in my reading about starfish extending their mouths to eat
Wow.

so there is no such thing as ambulacral plates in ophiuroids? the outer "shield" is the only skeletal part of the arm?