Today, some neat science with a cool Australian starfish!

Today's blog comes from my colleagues Kate Naughton and Tim O'Hara at the Museum Victoria in Melbourne, Australia! who have JUST published a paper describing a NEW species of the familiar Australian biscuit starfish, Tosia in Invertebrate Systematics!

(one is Kate and one is Tim-can you guess which one?)
I have mentioned Tosia before on the blog...It is a starfish in the family Goniasteridae and its genus name is the Latin word for "Inestimable" which alludes, of course, to the animals' incredible natural beauty!

Tosia, as I define it, is found ONLY in Australia, where it is quite abundant and relatively well-known to the people who study marine biology thereabouts. One species in particular, Tosia australis, occurs widely throughout the temperate southern part of Australia. 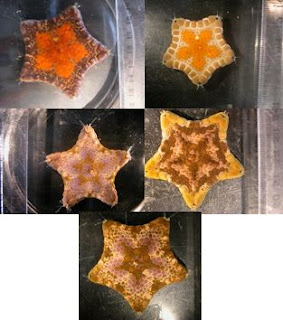 (Image courtesy of Kate M. Naughton!)
Taxonomists have been noticing T. australis for YEARS and describing a myriad of species. Over the years, some FOURTEEN species have been described-but refinement of species concepts (and removal of unecessarily redundant species) have whittled down the total number to three.

It has led to the identification of what's called the Tosia australis species complex!! That's what happens when you have a lot of closely-related populations that all may or may not be different species.

These populations usually show tenuous morphological differences between different "species" in the related network which are typically spread out over a relatively large geographic region. The North Pacific 6-rayed starfish Leptasterias, which I've written about here, is also a species complex.

Something NEW! Brooding Discovered!
So, for an animal that occurs so close to shore, surprisingly little was known about it. In the 90s it was discovered that Tosia australis was a SPECIAL kind of starfish!! It showed an unusual reproductive behavior: BROODING juveniles! That is to say, its offspring live on the adults.
Not too unusual in vertebrates, but VERY unusual in starfish!

Also, Tosia australis has been known since 1840-so it took over 150 years for them to discover that it brooded juveniles!! So, this led to some close observation. 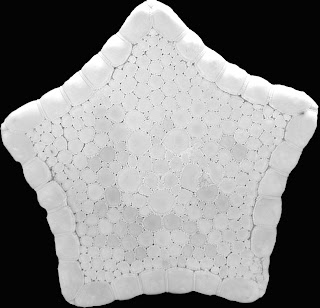 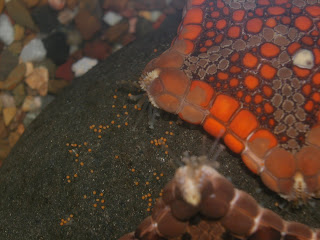 
So, the investigative talents of Ms. Naughton and Dr. O'Hara were applied towards the question!

Did the difference in larvae mode also translate into further biological differences??

During a museum visit to Melbourne, I was talking shop with Kate and Tim. I was pretty sure that all the morphological variation in the species complex would translate into regional or environmental differentiation VS. Tim who believed that they would split out by larval type.

Larvae in several other species is highly variable but often did not translate into phylogenetic differences..so I figured it would probably do the same here.

And in fact, I was SO confident I was right, that I wagered a gentlemen's bet with Dr. O'Hara that I would be right!

So-I said: "Go get the DNA and prove me wrong!"

And so they did (and had started before I had made the bet!) 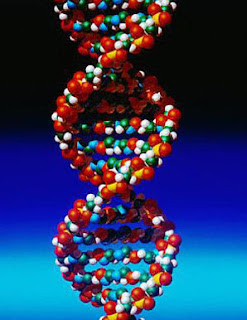 Oops! Guess I just lost 10 bucks!
The final analysis following a survey of many specimens from Victoria, Tasmania, and South Australia supported three different species, including something NEW that hadn't been observed before!!! 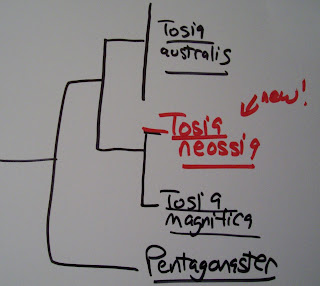 Several specimens from Tasmania and Victoria were supported on a separate clade as a NEW SPECIES. Kate came to call it Tosia neossia. The species epithet neossia is Greek for "nest" in reference to this species' brooding habit.

And here it is! 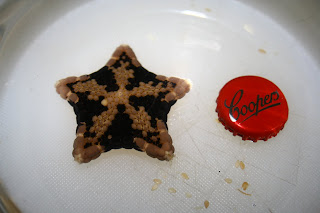 (Image courtesy of Kate M. Naughton!)
T. neossia is very similar to the well-known T. australis but, aside from a bunch of external morphological features, one important feature sets them apart....

The difference is in the Larvae (i.e., juvenile starfish)!

One of the fundamental differences here is that of the difference in larvae between Tosia australis and T. neossia!

The new species Tosia neossia had BOTTOM larvae with large yolky eggs (this kind of egg is called lecithotrophic)!!

(Image courtesy of Kate M. Naughton!)
Unlike more "typical" larvae, these tiny guys were negatively buoyant (that is to say, they sink rather then float)!

They are emitted from the mother and crawl along the bottom using little lobes to get around until they fully develop into larval adults. These little BOTTOM larvae (shown here as early stage larvae) can be seen here (courtesy of Kate Naughton!) 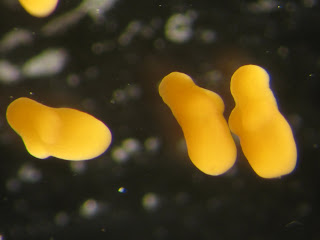 
Here is where the larvae begin to change into what Kate calls the "tripod phase". These utilize a large lobe that helps move the larvae around before it begins to attach someplace on the ground after developing to the right stage....

(Image courtesy of Kate M. Naughton!)
....And finally, here is the settled larvae (oral view-looking up into the mouth). Note the tiny red dots, which will eventually become the eyespots!

This little fellow will develop into what will eventually become 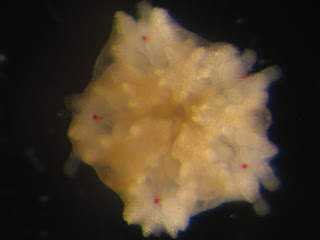 This is in direct CONTRAST to Tosia australis which has SWIMMING juveniles that emerge from the aboral surface (via gonopores on the top surface). 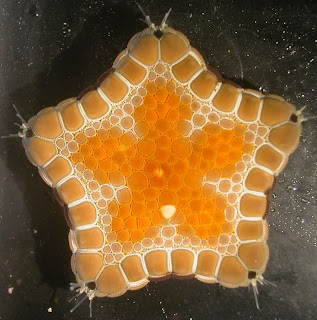 In contrast to the larval juveniles of T. neossia, T. australis has eggs that are postively buoyant and are covered with small CILIA!! That is, they have little beating hair-like threads that can keep them swimming before they settle out somewhere.

In addition to the DNA and morphological evidence (you can go to the paper for details) the larval story goes like this:

Tosia neossia! Gonopores open on ORAL surface (i.e., DOWN) where the juveniles sink to the bottom. They are bottom-living and non-ciliated until they grow into juvenile adults!

Tosia australis! Gonopores open on ABORAL surface (i.e., UP) where the juveniles float and can sustain a swimming stage until they settle to the bottom and grow into juvenile adults

TWO species. VERY similar looking! but with DISTINCT juveniles growing into adults that are hiding right in plain sight!

Thanks to Kate Naughton for helping me with images!
Posted by ChrisM at 3:34 PM

Great post, very interesting to read about the differentiation in the species! Thanks for continuing to make these excellent posts, I love reading these!

Great job mate! I'm doing school research on tosia neossia and this is like the only information I can find.

Hi Anonymous, I described little Tosia neossia, so if you want more info on the species, feel free to email me at kmnaughton@gmail.com

You learn something new every day! Congrats on the discovery. I came across this new species you've described when doing a CAAB search on T.australis to find it's CAAB code. Question is now how does the 'amateur taxonimist' distinguish between these two species. I have many images of these Seastars taken on dives in and around Port Phillip Bay.

The best way to distinguish between Tosia australis and T. neossia is by colour pattern, but unfortunately it's quite hard to describe! As a brief summary, T. neossia is generally smaller and flatter, and the plates on the oral surface are much more heavily granulated, particularly around the mouth. Re: the colour, you'll find that T. neossia can be *deep breath*: red/black, red/brown, cream/black, cream/brown, cream/red, black/brown; usually there are alternating "strips" of colour, although these may be incomplete (sometimes only a couple of plates along the arc between the arms).

T. australis is... well... everything else! Monochromatic orange, purple/pink/brown starbursts, speckled brown and pink, generally quite spectacular and striking. The alternating strips of colour typically aim at the tips of the arms, where as in T. neossia, they usually aim at the arc between the arms (if that makes sense). I gave a colour plate to Reefwatch Victoria and there's one in the Tosia neossia paper (Invertebrate Systematics October 2009) which illustrates the colour patterns far better than I can describe them.

Hope this helps! Feel free to send me any photos at kmnaughton@gmail.com if you're not sure about a specimen and you want a confirmation.

Are both australis and neossia known from Port Phillip Bay? I have a few Tosia I've photographed in the past, all solid orange-red, and I had them as neossia for a while but I wonder if australis is a better option.

According to Kate Naughton "Both are in PPB, as is magnifica (frequently see all three on the same dive)- solid orange-red does suggest australis though..."

thanks for your question!