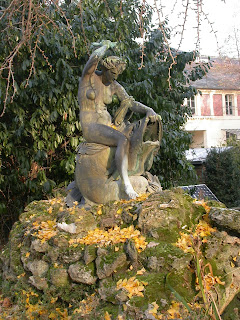 Just some quick bits... first, the above statue of some oceanic nymph or goddess doing battle with a giant fish!

One thing that comes up every so often while going through the Paris museum is how incredibly OLD it is! Nothing I've seen in any American museum comes close.

Many of the specimens were actually on display in the museum gallery up until its facelift in the late 1980s/early 1990s.

These older specimens are relicts from an era when each museum specimen was treated with a reverence (and resources) that is/are really not seen any more.

This includes some pretty intricate display bottle/jars such as this one...which is sealed with a melted metal, which I think is tin and has the specimen tied to a thread and actually suspended from a floaty glass sphere!! 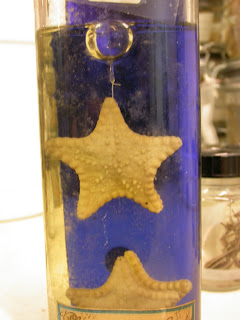 Several of the specimens in the collection have been here since the 1800s..since the days of Lamarck! 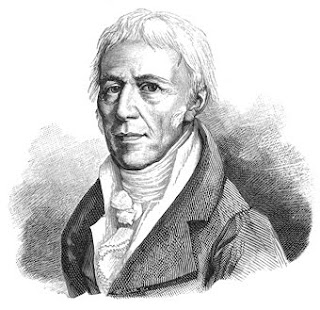 Lamarck, whose full name was Jean Baptiste Lamarck (yes I know its longer) was a famous French naturalist who published widely on botany, geology, and invertebrates. But is perhaps best known for Lamarckian style evolution (aka Lamarckism).

This was an early version of the idea of evolution that "proposed that individual efforts during the lifetime of the organisms were the main mechanism driving species to adaptation, as they supposedly would acquire adaptive changes and pass them on to offspring."

A nicer summary of Lamarckism is found here. thanks to Echinoblog reader Trevor P.!

Anyway, he collected and curated MANY specimens throughout the Paris museum, including this one (a basket star)... 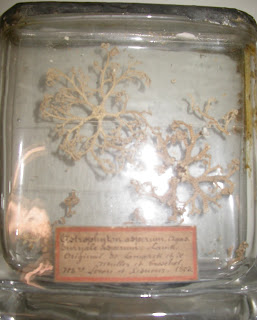 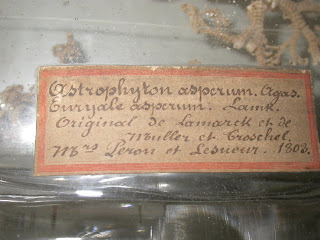 I'm not sure, but I think that this might even be his writing!
More to come on modern research performed in the Paris Museum!
Posted by ChrisM at 2:57 AM

If you want a fuller account of Lamarck's theory, check out the following (by historian Phillip Sloan):

That is so so cool!!

This is so cool! I'm so glad you are there!