What Eats Starfish? (aka What do starfish fear?)-The Top Starfish Predator-Solaster dawsoni & the 13-arm Hammerlock! 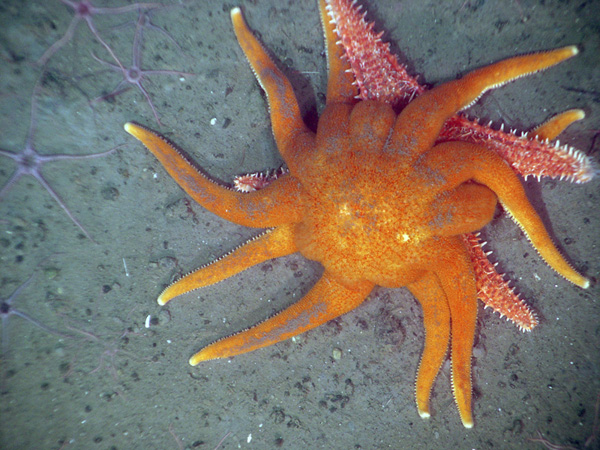 I've described different modes of how starfish feed before. Some pick food out of the water or catch moving prey while others just eat until they can't eat anymore! but I don't think I've ever introduced the ONE starfish whose mere presence inspires fear in other starfishes! 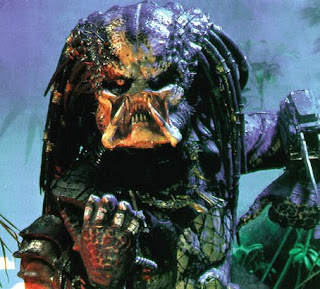 The west coast of North America is blessed with one of the most diverse faunas of sea stars anywhere in the world and thanks to the convenience of the intertidal and the relatively convenient subtidal depths accessible with SCUBA, a lot of the natural history and marine ecology along the coast has become pretty well known.

Observations from a paper by Karl Mauzey, Charles Birkeland and Paul Datyon in a famous paper in Ecology from 1968 detailed the feeding behaviors of 18 species of asteroids in the Puget Sound (Washington state) region. A subsequent paper by H.D. Van Veldhuizen and V.J. Oakes in Oecologica followed up with feeding observations of Solaster dawsoni along the northern California coast.

So..most species in the genus Solaster live in cold-water areas, such as the deep-sea or near one of the polar regions-Arctic or Antarctic. Based on what's known, most are predators of other animals. Here's one feeding on the deep-sea sea cucumber Pannychia.
Most species of Solaster (and indeed most solasterids) have multiple arms. Their sun-like appearance is where we get their name. "Sol" meaning sun and "aster" referring to the starfish.

One species, Solaster dawsoni lives off the cold-temperate west coast of North America and it has a VERY particular feeding preference. 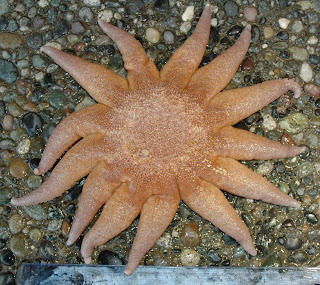 (pic from the WallaWalla Univ. Website)
It eats OTHER starfish!

And across its range-it has a LOT of them to choose from!

Here's what looks like S. dawsoni feeding on Hippasteria spinosa. 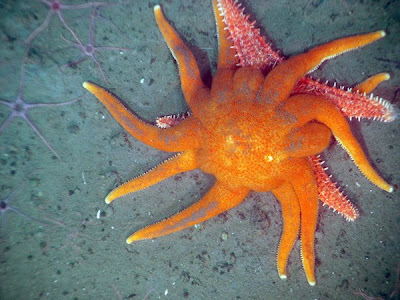 (this image from NOAA Ocean Explorer)

Starfish Eats Starfish: The 13-Arm Hammerlock!!
So, just how does one starfish (albeit with 13 arms) actually EAT another? What is the attack like?

S. dawsoni roams along the bottom, alternatively raising and lowering the arms which are in front of it.

When contact is made (usually with the tube feet), the animal then begins to bear down the remainder of its arms and etc. and begins a rather huge "lurch" forward!

Solaster dawsoni has now effectively "humped" the prey item and has all of its arms covering over the body. 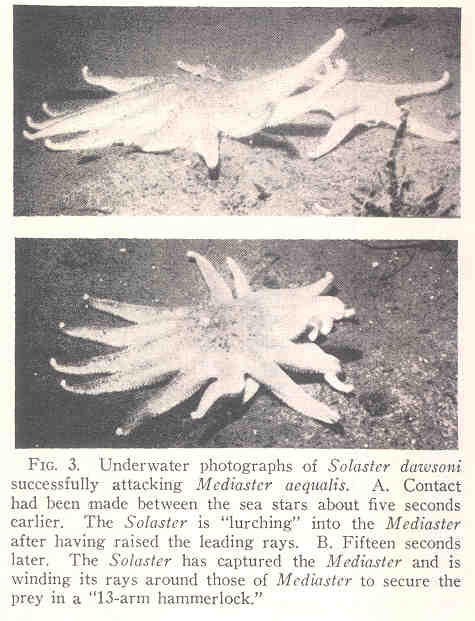 To quote the small print in the figure above


"The Solaster has captured the Mediaster (the prey item in the figure) and is winding its rays around those of Mediaster to secure the prey in a "13-arm hammerlock."

The stomach is then applied and begins to digest the prey. Presumably, while its still alive.

Size is often a consideration...and S. dawsoni seems to find an easier time of swallowing smaller individuals, such as smaller sized Pisaster ochraceus and this tiny Leptasterias, which it just swallow whole... 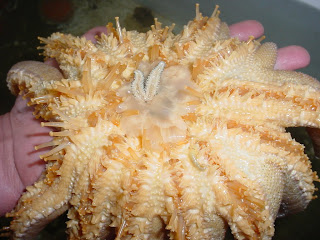 And what species does S. dawsoni enjoy eating? Observations and experiments suggest that it actually prefers eating a closely related species.. Solaster stimpsoni! 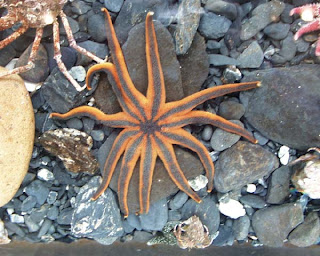 (from the NOAA- AK Fisheries Science Center)
What you can learn by watching "the escape response"..
Prey runs away from the predator.

Among the many animals in the intertidal-observation of the speed and severity of the prey upon contact or even upon "smelling" the predator in the water is considered an important behavioral observation, especially for understanding the interaction between hunters and their prey.

How the prey defend themselves-and how successful they get away also inevitably factors into understanding of how ecosystems work..

Mauzey et al. (1968) below photographed Solaster stimpsoni in its defensive posture relative to an onslaught by S. dawsoni. 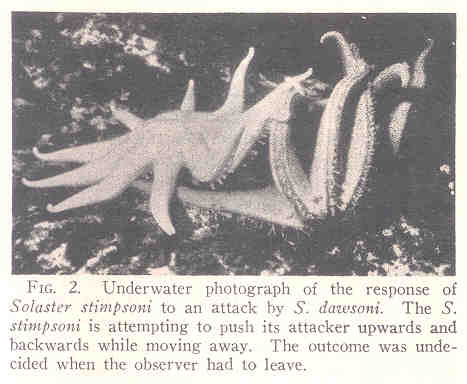 Solaster stimpsoni essentially tries to push S. dawsoni off it by upending its arms and moving away.

The study by VanVeldhuizen and Oakes (1981) tested the interaction among seven species, including Patiria miniata, Henricia, Leptasterias, Pisaster ochraceus, P. brevispinus, and others. Strong escape responses were observed in ALL of them EXCEPT for one...

and that one species is the "Leather Star" Dermasterias imbricata! Out of 22 trials, exposing S. dawsoni to Dermasterias resulted in the latter doing either nothing or else a "mild" escape response. 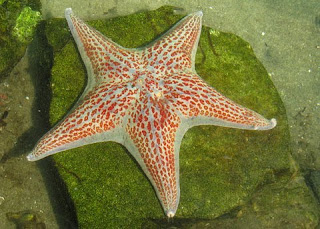 That "garlic" odor that accompanies Dermasterias may be the deterrant...but the idea has never been fully tested..

Some species, such as the Pink Star- Pisaster brevispinus use tiny, little wrench-shaped structures called pedicellariae to defend themselves. Pedicellariae can cover the surface of the animal and pinch at the tube feet of predators that attempt to "roll" over them.. 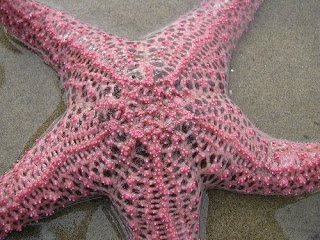 Finally..one of the most interesting reactions was between Solaster dawsoni and the other "big boss" predator of the intertidal/subtidal... Pycnopodia helianthoides aka the Sunflower star.

Many probably know that Pycnopodia is a voracious predator of almost everything that it comes across-sea urchins, mollusks, etc. Pycnopodia's presence in the water can make some mollusks-such as abalone and clams go into some crazy convulsions! 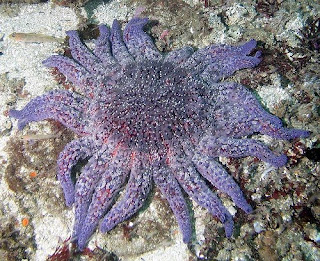 Based on lab experiments, it turns out that not only will Pycnopodia RUN upon contact with Solaster-but Solaster dawsoni actually ellicits the *strongest escape response*!!

Out of 35 trials, nearly ALL of the Pycnopodia reacted strongly.

They tested all sizes from 2.5 cm to 23 cm radius and Pycnopodia "immediately fled from S. dawsoni, and at high speed."

And in case you ever wanted to know-the "Retreat speed" for Pycnopodia is about 50 cm/min! (normally about 5 to 10 cm/minute)

A quote from the authors:


Several times we observed that Pycnopodia fled with such haste that many of the tube feet lost contact with the substrate near the end of the power stroke and shot rearwards and upwards....The podia occasionally were pushed back with enough force to "kick" fine particles rearward.

in other words "eat my dust"... The rays on Pycnopodia also autotomize (i.e., they are shed) when Solaster gets a grip on it..

So, here is a video that shows kind of what I mean. Note that the Solaster is applied to the big social cluster of Pycnopodia...then as you watch over the course of the video..they disperse!


But there you have it-a starfish half the size of the formidible Pycnopodia that will make the latter gallop off like a scared little kid!

That is one bad-ass starfish.
Posted by ChrisM at 8:13 PM

No matter where or when, you post some of the most amazing stuff on here... Thanks a million for making echinoderms so interesting

Absolutely fascinating! Thank you so much for posting this!