So, today is National FOSSIL DAY! WOO!!  and y'know, I figure WHAT do people WANT to see on National Fossil Day???

OBVIOUSLY the answer is PARASITES!! (and related stuff like commensals!) Everyone LOVES parasites! Especially echinoderm parasites! Its especially exotic when you can see them as fossils!

To be fair, some of the relationships below are probably better described as "commensal" which means that one derives gain from the host without the host losing resources..

What's often most exciting about these kinds of fossils is that we actually have DIRECT EVIDENCE of animal interaction!  Which for the fossil record is often difficult.

We can see that fish had big bone-crushing teeth and we can even see broken snails nearby on a fossil deposit, but after 300 million years, you have to be careful about conclusions.  This is often what makes good reliable evidence of paleoecology so valuable..

Here are 5 interesting cases of parasitism/associations/commensals on echinoderms from the fossil record! There are undoubtedly more...

Go here to see a neat free review account by paleontologists Tom Baumiller and Forest Gahn with a list of the many different cases!

1. Paleozoic Platyceratid Snails on Stalked Crinoids!
This one is probably one of the best known among fossils.  Basically there is one Paleozoic group of snails belonging to the family Platyceratidae. They often look like this: 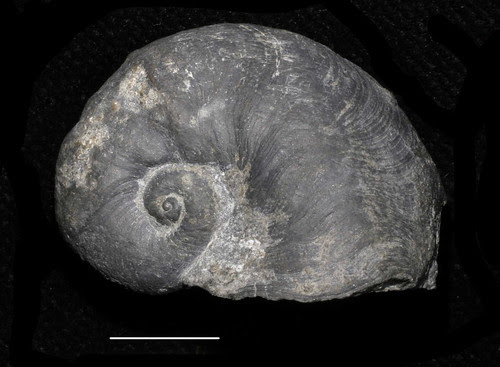 Multiple genera have been observed in a specific position right on top of the calyx or "cup" in stalked crinoids. 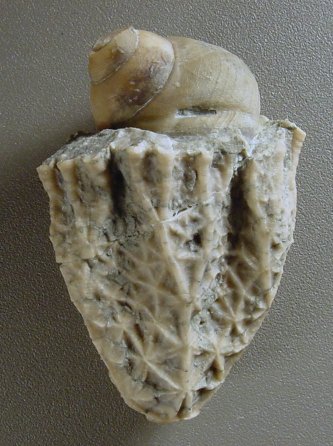 Here's what the animal typically looks like to give you a general bearing.

Most interpretations suggest that platyceratid snails were  COPROPHAGES. That is a special kind of feeding which specializes on consuming POOP!

There are literally dozens of papers on the paleoecology and biology of these animals..and so I will leave this interaction to be written up in a later blog... But platyceratids are found on MANY different crinoids AND other stalked echinoderms from the Paleozoic, such as blastoids (see this account by Tom Baumiller)!

But that will be a story for next time...
2. Snails that are parasites on Cretaceous (Mesozoic) to Paleocene (Cenozoic) sea urchins
This fossil was reported by colleague Christian Neumann (see his website here) and Max Wisshak from this issue of 2009's Palaeogreography, Paleoclimatology, Palaeoecology...

Basically Neumann discovered fossils, such as this Cretaceous urchin Echinocorys conica with this holes and marks in the body...

and also in this specimen of the same species showing more of these discrete holes on the test... 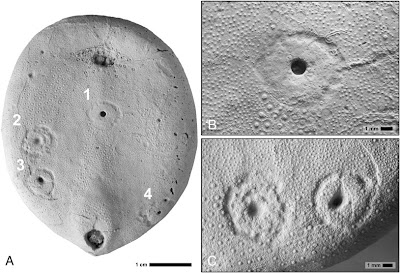 These holes were compared against the kinds of holes made by modern day gastropods in the family Eulimidae which are often seen as parasites on starfish such as the blue Linckia laevigata shown here... (images by Sven DeVos on Flickr) 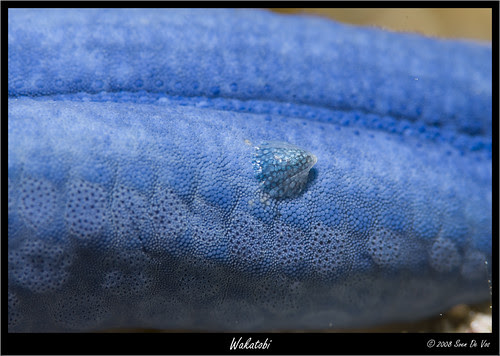 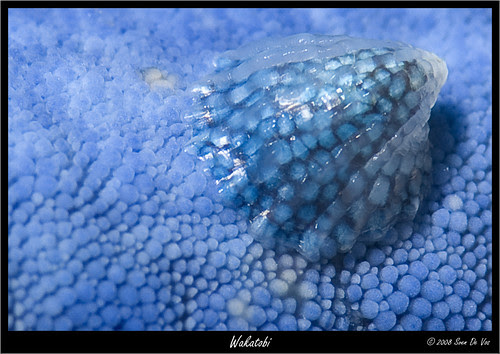 Snails like this basically pop their proboscis into the body wall and take advantage of the host as prey. Its thought that they occur on a relatively low number of the total population.

3. A Shelled amoeba (Foraminifera) parasitic on a Cretaceous Sea Urchin
Christian Neumann and Max Wisshak have yet another paper in Ichnos (fr. 2006)!

This time showing how a shelled amoeba (i.e. a foraminifera also informally referred to as "forams") has parasitized the Cretaceous urchin Echinocorys (same species as the one above).

Their story here is this: Some forams will attach to an animals' shell or other hard bottom. Below is an example of one from the shell of a bivalve.

Notice how it leaves that prominent attachment scar on the right after its been detached...
Neumann and Wisshak observe this on 19 different locations (and thus 19 individual parasitic forams) on the test of this fossil sea urchin! Note that the big curvy worm tube isn't part of the foram traces...

4. Symbiotic Relationship between a polychaete worm that bores into Cretaceous German Sea Urchins
And yet another paper by the industrious Max Wisshak and Christian Neumann in Acta Palaeontologica Polonica 51: 589-597! This one can be downloaded here!

Here Wisshak and Neumann document borings in the sea urchin's skeleton via the work of an industrious polychaete worm-a polydorid!  Such worms bore though hard substrates and are asociated with tunnels such as this: 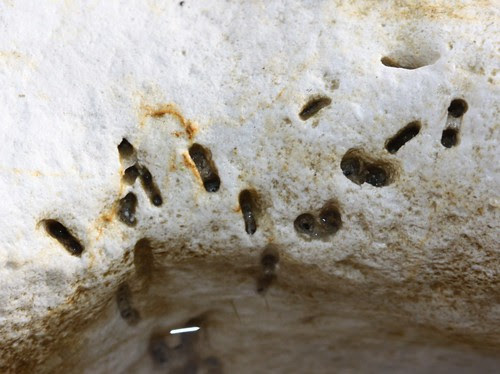 But how can you be SURE that these worms didn't just find the dead animal's skeleton and bore through that??   Why make the jump to "These holes were made in the animal when it was alive"???

This cartoon basically shows that following the worm's "boring" through the skeleton and the deformation of the skeleton by the worm..the surface spines and other structures- pedicellarie, etc. ALL REGREW over the area that had been "bored" through!!

Here are pics of the actual borings through the sea urchin test..
5. Jurassic Worm Parasites (Myzostomes) living in crinoid arms
Finally! This neat account was described by colleague Hans Hess in the Journal of Paleontology recently in 2010! (click here for abstract)

Myzostomes are annelid worms (the same group of segmented worms that includes earthworms, scale worms and so forth) that live as parasites on various invertebrates, but especially crinoids! 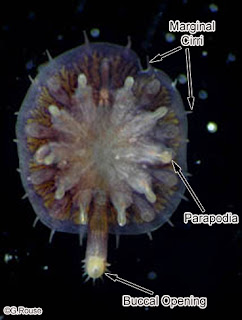 These worms live on crinoid arms like this (the worms are the brown and yellow bits in the center). Here is Myzostoma fuscomaculatum on the arm of a South African modern crinoid.
Myzostomes can also form galls on crinoid arms and apparently have done so for a LONG time. As these fossils occur from the JURASSIC...

And there you have it! FIVE awesome echinoderm parasite/commensals from the FOSSIL record no less!
Hopefully I'll get around to elaborating on those poop-eating snails some day!
Posted by ChrisM at 11:29 PM

I have a sea urchin fossil that broke in half to reveal a parasitic snail fossilized within. If I could I would upload a picture to the website.

i remember this asteroid/ophiuroid fossil that acted as commensal toward stalked crinoids in a website somewhere, probably when geocities still existed. Maybe it was Onychaster? I forgot..