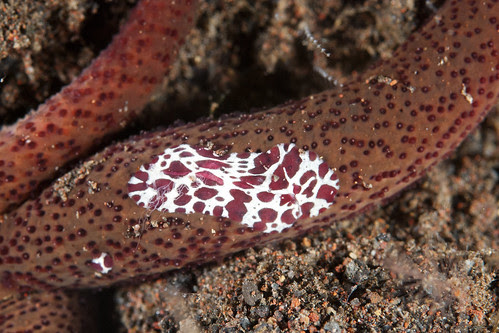 Photo by Arne Kuilman
This is one of those RARELY seen animals that I love sharing with people because they are SO strange.

First lesson: Ctenophores are a group similar in appearance to jellyfish. But in a separate phylum-The Ctenophora. Here's the Wikipedia for handy-dandy quick reference. They are identified by "ctene rows" that are what they use to propel themselves. Underlight these ctene rows shimmer giving them an iridescent appearance which looks like this:

But there's one subgrouping of comb jellies that, for some odd reason, have taken to living on the sea bottom-sometimes on other animals, such as sea stars but also on sea urchins and corals.

Its thought that these are commensal relationships. In other words, the ctenophores live at no apparent "cost" to the host. But relationships are poorly understood-so who knows?

At the very least having THAT many ctenophores crawling around on your surface might clog up your papulae for respiration and so forth.

A brief explanation was from my blog awhile back here.  I don't know how common it is to see these in the field but these are pretty rarely seen for most people (although here is a small group on Flickr devoted to them) .. so I thought it would be a good idea to put them all in one place for everyone to enjoy (especially since there's a couple of new ones!)

The animals are those strange moving white blobs on the surface. The ones living on the sea stars are in the genus Coeloplana. I'm not sure if the ones further down that are not living on sea stars are the same genus.. but I'm guessing probably not.

Those threads? Are the feeding tentacles that you would normally see here in the "sea gooseberry" Pleurobrachia 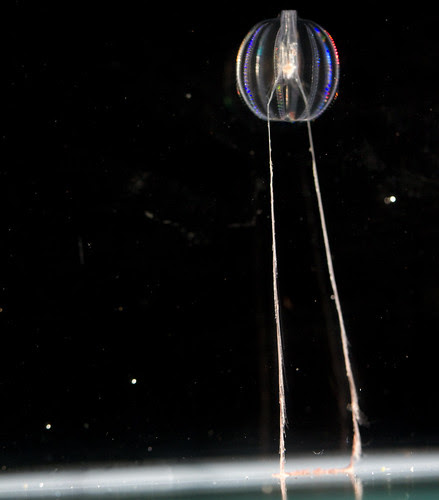 But here is Some neat NEW Benthic Ctenophores on Echinaster callosus! Shot in Lembeh

here is the FIRST video of benthic ctenophores as shot by Blenny Watcher. Host is Echinaster luzonicus

Here are some from Bocas Del Toro, Panama without the sea star host. Shot by Rosana Rocha

Here's are more species from Japan!!
Posted by ChrisM at 9:53 AM

These are SO cool, beautiful *and* weird, Chris! Learning about life like this (not to mention getting to see cool video of it) is what gets me out of bed in the morning. Thank you!