Who Named the Bobbit Worm (Eunice sp.)? And WHAT species is it.. truly?? 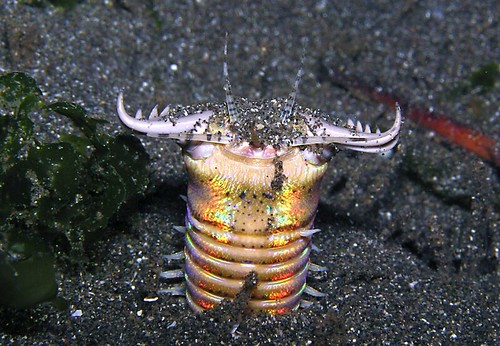 
There's a certain few marine invertebrates, which for various reasons, capture the imagination of the public and manage to get a foothold into popular culture. Bathynomus-the giant deep sea isopod!  Sea Pigs, such as Scotoplanes and their relatives-weird looking deep-sea sea cucumbers.

Among this pantheon of photogenic and/or striking bunch of marine animals is a formidible polychaete worm- in the genus Eunice, also known as the BOBBIT WORM!

Here's video of this animal's remarkable prowess (more videos are here). These worms  reach 3 m (~10 FEET) long and are raptorial predators which use spring loaded jaws to capture their prey... One record holder indicates a worm which was nearly SIX meters in length when collected!

Yes. That's basically a worm the size of a large SNAKE with jaws to match!

This animal has been getting increasingly more exposure as various sites have been introducing marine invertebrates into their blogs and such. This is a good thing for those of us who study marine invertebrates. An animal once known only to specialists is now becoming accessible to everyone..

I've noticed increasingly however that many of these newer accounts of the Bobbit Worm are missing something.

This question has even been probed in scientific journals by scientists! This has led to more questions!

Where does the name "Bobbit Worm" Come from??
In 1993 a case hit the headlines with such a resonant act, it came to be one of the defining news pop culture items of the decade. A woman, Lorena Bobbit, cut off her husband's penis with a knife. The penis was re-attached.  You can read all the gory details on Wikipedia.

In the late 90s, circa 1993-1995, I was a grad student/ curatorial assistant in Invertebrate Zoology at the California Academy of Sciences.  (I'm ancient like the hills!)  I was working through my Masters and had not yet left for my PhD.

Part of my time there involved my helping two of the curators, Gary Williams and Terry Gosliner, who were experts in soft corals and nudibranchs, respectively, identify starfish for their upcoming book on Indo-Pacific animals.

During the research for the book, Gary and Terry returned from a trip to the research dive to the Philippines where they spied a crazy thing. A great story that was told one brisk Friday in San Francisco!

(story recreated here with new images) A GIANT worm with spring loaded jaws the size of a SNAKE jumped OUT of its burrow and grabbed a freakin' FISH while it was swimming by! Images below by Eunice Khoo (Mer Mate)

I didn't believe it. But there it was.

Bear in mind. Digital cameras were just becoming available. HD underwater Video was nowhere nearly as good as it is today. YouTube was non-existent. The WWW was around but didn't have the size and scope it was today. Most people didn't even KNOW polychaetes were any larger than about a foot long at most. If you saw polychaetes in a coffee table book or marine biology photo magazine you were pretty lucky. The only people who ever saw these huge monstrous worms were divers, scientists and maybe the locals.

Eventually on one of their trips back, Gosliner and Williams managed to collect a specimen AND a picture of the animal, which they caught a picture of and put into their book, published in 1996...
(and which is quite good with many verified identifications. Go here to pick up a copy 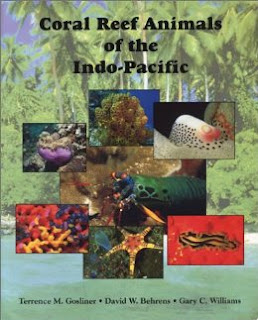 The specimen had been identified to genus, Eunice sp. but not to species (I'll explain more below), but Terry Gosliner felt that it a special beast worthy of distinction! And hence the name... (excerpt below from their book)

So, Dr. Terry Gosliner, curator of mollusks and world expert on nudibranchs was the man who coined the name BOBBIT WORM. At the very least, this is the first account of the name in the literature. 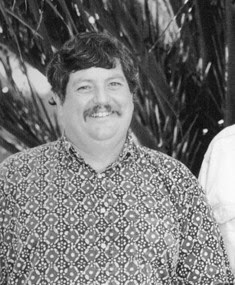 The timeline and scenario is consistent

Some clarification on various myths that have arisen....

So, what species of polychaete IS a Bobbit Worm??
One major misconception that HAS arisen however, is that because the Bobbit worm is big and obvious that we know what it is! i.e. what species it is...
After Gosliner & Williams collected the worm, they sent it to the Smithsonian's world polychaete expert Kristian Fauchald. He identified it to Eunice but stopped short of the species.

Why? Because the group is... complicated and this has some bearing on exactly WHAT a Bobbit worm is. Allow me to explain.

We often see the species name Eunice aphroditois used as the species name for the Bobbit Worm, such as here in Wikipedia and in many other places.  But this is almost certainly an oversimplification.

Since its original use, the common name has been largely applied to almost any large, predatory polychaete, which most untrained "citizen scientists" such as divers, aquarists, etc.  are generally unable to distinguish.

For example, is this a "proper" Bobbit worm?  It looks close, but lacks the same kind of jaws. So, probably not. But its not unsual for big, attractive polychaetes to get labelled "Bobbit Worms"

This for example is another species of Eunice (I think..) but is it a "Bobbit worm"?
The genus Eunice itself, contains OVER 350 accepted species found all around the world! Go here to see a list of them.  Even if you pare down that list to ONLY the really big ones as was done in this article you're still looking at a HUGE number of species that have since fallen under the umbrella term "Bobbit worm."

In fact, one hugely complicated problem is the definition of the "Eunice aphroditois" species concept itself. A problem outlined here by Sergio Salazar-Vallejo and colleagues.

The problem breaks down like this:
The 'Proper" Bobbit Worm was a species originally observed from the Philippines and may or may not be the same species frequently observed in Indonesia and thereabouts in videos and such. In fact, if you read the description above, it was originally thought to be a new species and still may be!

This paper by Anja Schutlz further outlines methods that we might further understand the questions surrounding the question "What species is the Bobbit worm??" Population genetics of the world populations and further sampling of species from around the world.. (as well as people who can identify them correctly).
So, conceivably we have not even SEEN the TRUE Bobbit Worm (i.e. the animal originally named as such) as a proper species yet!

But because the common name "Bobbit Worm" seems to have become rather liberally applied to most large eunicid worms, its likely that name will stick. Not just to Indo-Pacific eunicids but to others..

Wow, I didn't realize the Bobbit Worm was so big. I'd always assumed it was maybe a few inches long, perhaps the size of a large bristleworm.

I also had no idea there was so much mystery surrounding its identification, although I hear that's fairly common for marine invertebrates around Southeast Asian

John! Yes, there are a surprising number of fairly large polychaete worms.. Nereis on the Pacific coast gets to be up to 2 feet long.

Within tropical reef regions in the temperate esp. to tropical Indo-Pacific areas the faunas for most invertebrates tends to be poorly known. I know scientists who find new species of nudibranchs on Flickr sometimes!

The Great Google informs me that no-one is selling a "Sexy Bobbit-worm costume". Imagine my sadness.

Do you know of any papers on the mechanics of the bobbit worm strike? I poked around google scholar and couldn't find anything.

I would be really surprised if there were any really detailed papers on any aspect of its feeding biology or ecology. The images and awareness of this species hasn't even really been known until recently. Other than systematics and taxonomy I'd say its a purely open field.

What I want to know is why Peter Simon Pallas, in 1788, named it *aphroditois*. Was it some kind of joke? This thing is pure nightmare fuel, why name it after aphrodite? Was he going through a bad breakup?

Not a joke. Many polychaetes are named for Greek goddesses and so forth, Aphrodite, etc. .. the scientists who described them saw and continue to recognize great beauty in them..