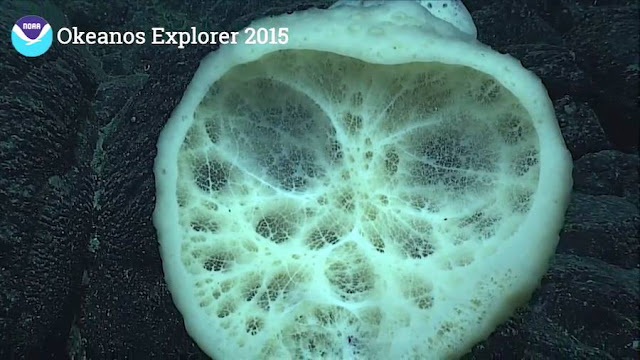 OKEANOS EXPLORER!! Since July 10th one of NOAA's primary research vessels has undertaken research in the Hawaiian Islands region, but it has only been since Sunday (August 2) that the Okeanos Explorer has begun live-streaming their video of the deep-sea (> 1000 m) bottom communities of the Hawaiian Islands.

A lot of their research in the area involves studying and characterizing the bottom communities-that is the organisms which make up the life living on the deep-sea bottoms.

This includes a variety of colonial animals such as coral (actually a catchall term which includes different types of cnidarians such as sea fans, soft corals and antipatharians) and many, many different kinds of sponges!! 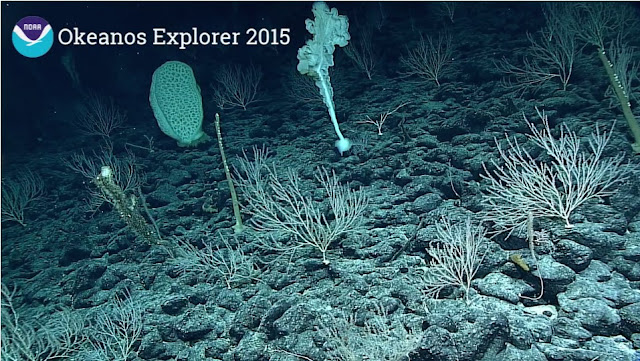 Sponges are animals, and although they are considered among the simplest they are FAR from the simplest to understand. Sponges, as a general concept, occur in the family tree of life just before proper body tissue have developed but just after cells have come together to act together as part of a greater body. There's a huge variation in the body plan of sponges but most typically use some kind of inorganic material to form a supportive skeletal structure.

For example, one grouping: the Hexactinellida aka the "glass sponges" have skeletons which are made primarily out of lattices of silicon oxide, in other words.. glass.

Glass sponges are weird. In addition to their glass skeleton, which is demonstrated here in the shallow-water Euplectella 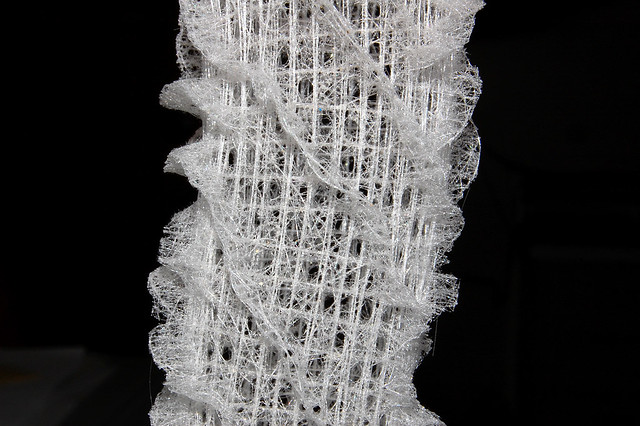 Their skeleton is composed of the skeleton which is covered by an organic substance known as a syncytium. A syncytium operates at nearly a cellular level being composed of amoebocytes (i.e. independent cells) rather than formally developed tissue.
In spite of their relative simplicty, the skeletons are complex and there's a LOT of variation in hexactinellids. They live in shallow and deep water. Mostly deep. There are over 500 species ranging from relatively shallow habitats to deep-sea habitats in 2000 to 6000 meter depths!

A LOT of these glass sponges are members of deep-sea habitats!  Here's a pic of the sea bottom at about 600 m or so? From off the island of Kona. These are ALL glass sponges. and each of those stalks anchoring them into the sediment?? Glass. Practically fiber optic cable! 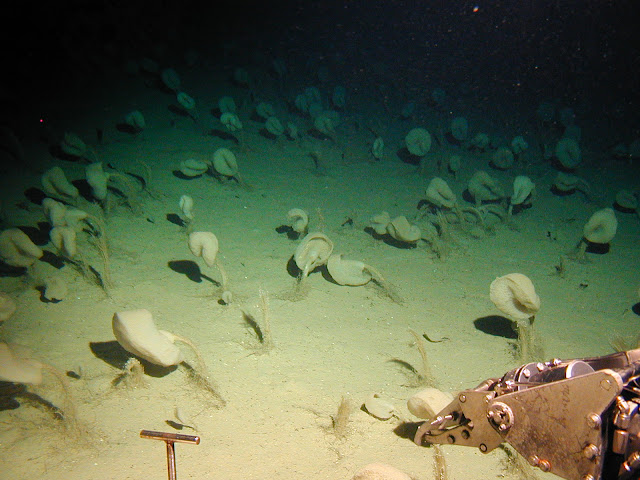 The Okeanos Explorer has been seeing a LOT of these glass sponges! They form an extensive part of the deep-sea habitats in the Hawaiian Islands region.

Some, such as this one called Regadrella has a more vase-like shape.. 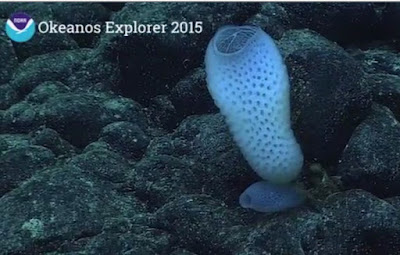 BUT the opening (called an osculum) is covered with an intricate glass covering called a sieve plate.. 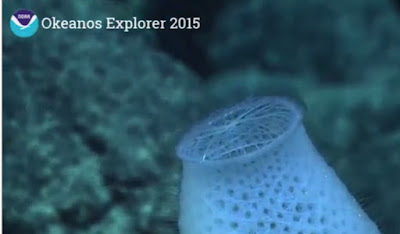 Others like this new genus/species is just kind of crazy looking. LOTS of weird textures and interesting folds attached to a stalk. 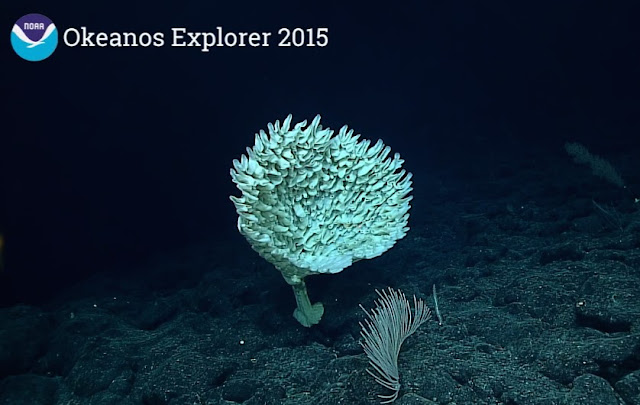 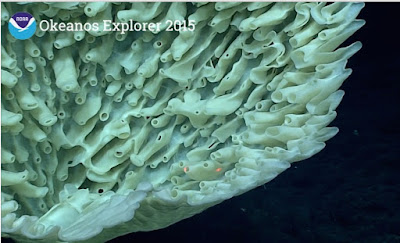 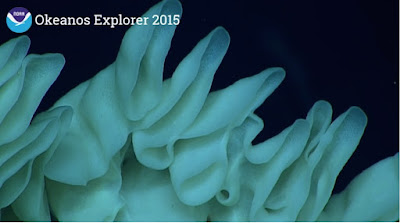 Another one... but with a slightly different morphology I think.. 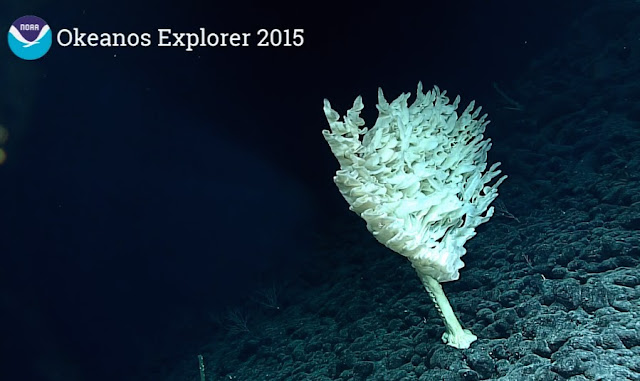 One thing to realize is the two red dots: These are 10 cm across.  That means this thing is HUGE! 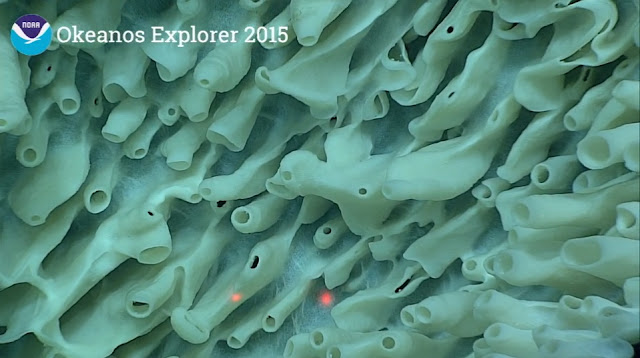 Here was the dead broken stalk from another different species. A big one. 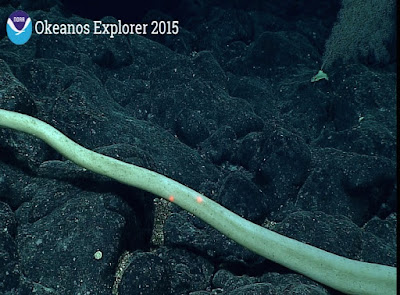 For size comparison, here's the stalk versus the ROV. EASILY 2m long! (6 FEET!) 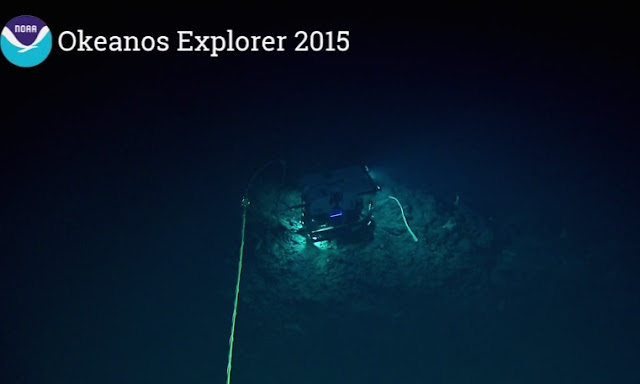 This one gives you some idea of how the stalk looks on living glass sponges. These aren't the same as the one above..but general notion.. 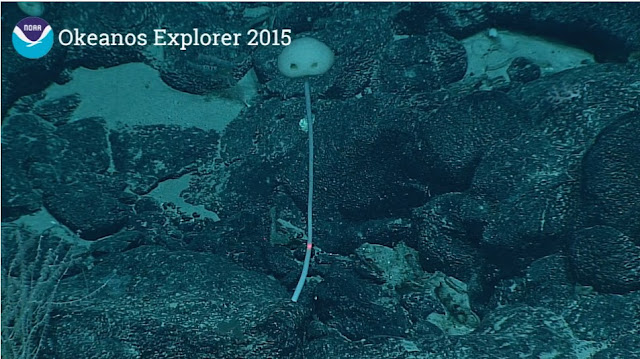 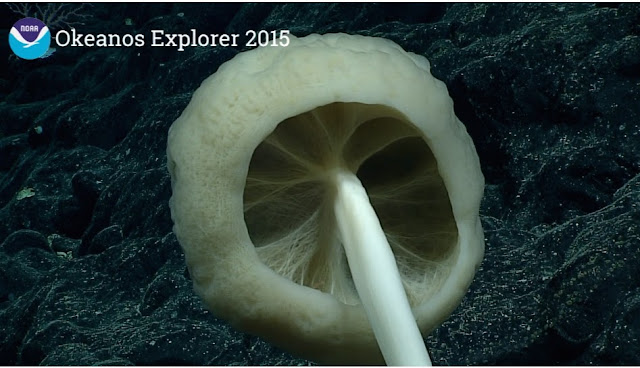 If by the way you've always wondered what the texture of these stalks might be like? go pull some fiber topics out of your wall! Did you know that glass sponges are actually studied as inspiration for better fiber optics?? (here) 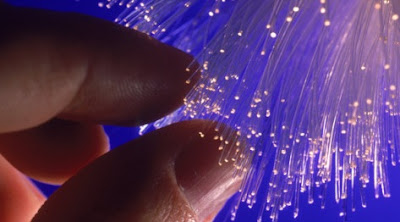 Although most sponges are filter feeders, some of them, such as these inoccuous looking cladorhizid sponges are actually carnivorous!!  These are likely predators on other animals!  These were unknown in the Hawaiian Islands region and are a new record for this group! 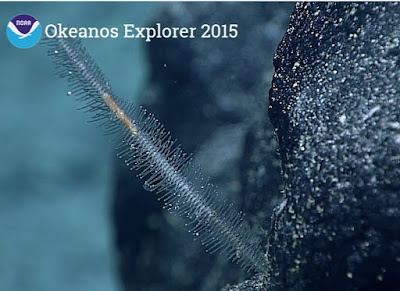 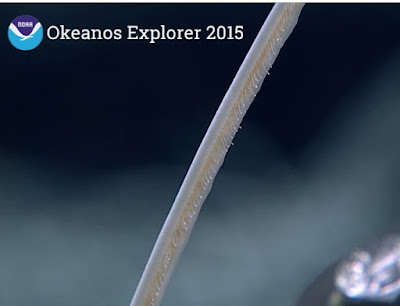 If you'd like to learn more about predatory sponges, my friends at MBARI have a TERRIFIC video about them

Sponges are also interesting in that, although they are animals, they don't really move and often serve as habitat or perch for various OTHER animals...

Numerous little crustacea, such as shrimp and copepods such as the ones shown below inhabit these large glass sponges for example.. 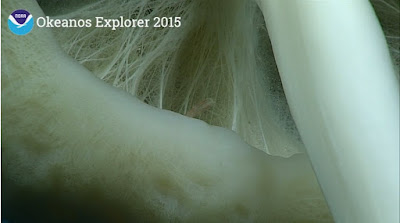 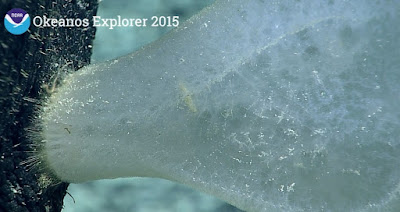 This feather star has seen fit to use this glass sponge, Farrea sp. as a perch for filter feeding 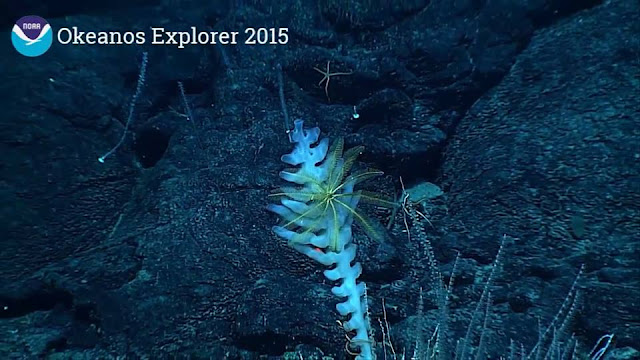 and of course OPHIUROIDS!! You can't have a deep-sea sponge assemblage without brittle stars! (in this case.. ophiacanthids) 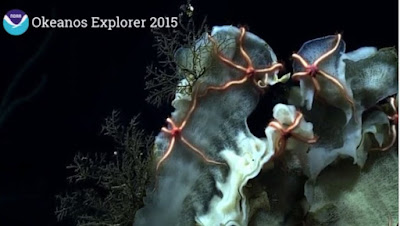 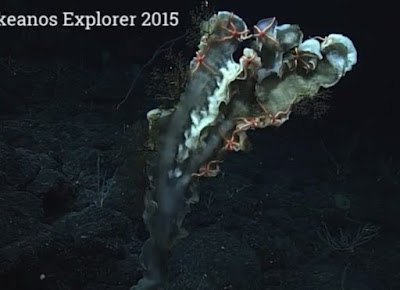 What sorts of things will we see next week? WOO!
Posted by ChrisM at 6:51 AM

I bet if you put a colored LED light inside or underneath that Venus's Basket sponge, it'd light up beautifully.

Very interesting information. We are currently engaged in a Citizen Science project with sponges in British Columbia. We would be very interested in sharing information.
This is a video of our sponges: https://www.youtube.com/watch?v=j2Akwn2XaG0&list=PLD07BC951081DE0BB&index=11