Okeanos Round up! Last week in the Papahānaumokuākea Marine National Monument!

So, sadly, the Okeanos Explorer's first leg has come to a close as it has concluded its survey of the
Papahānaumokuākea Marine National Monument and the ship has gone into port at Pearl Harbor to prepare for the third leg of the research expedition starting August 28th, surveying the main Hawaiian Islands and Geologists Seamount!! YOW! 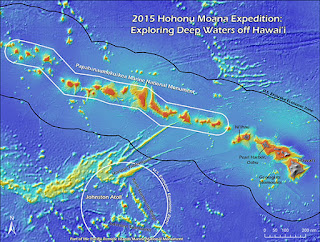 In the meantime I also wrote a Mission Log for the last leg about starfish here.

What sorts of COOL inverts did we see in the last 7 days?? Here are the ones that caught my eye...
1. Benthic Ctenophores on Sponges Galore!

Many of you know that my blog showcases some of the most extraordinary examples of invertebrate diversity that I can find. I have talked before of my love of benthic comb jellies (aka ctenophores), which most people, if they experience them at all, encounter them in shallow water (here).

Long story short: these are similar to jellyfish, most are swimmers, but some are specialized to living on the sea bottom or other substrates.

They occur in the deep-sea but are VERY poorly known there. Here are what are undoubtedly NEW observations. Possibly even a new species of these animals living on glass sponges between 1000-2000 meters! 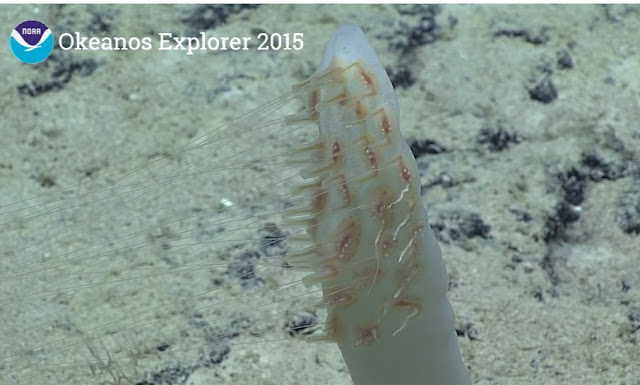 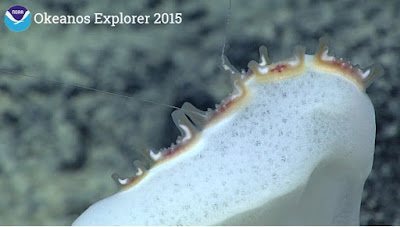 Here's a tight shot showing only a few with their tentacles extended. These tentacles were actually measured by the folks on the ROV. They can get to be OVER A METER (3 feet!) LONG! 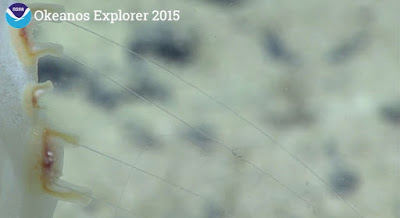 2. The Rare(ly encountered) starfish Pythonaster sp.!
Exciting to me was the discovery of one of the "holy grail" of deep-sea starfishes: A species in the genus Pythonaster! NOT PREVIOUSLY KNOWN FROM HAWAII!  Or for that matter, this far in the Pacific!!

We have seen a different species of Pythonaster in the Atlantic on previous Okeanos cruises (here), but those were known from older records. Not only were these new, but now we had pics of them FEEDING on a sponge!!    AMAZING! 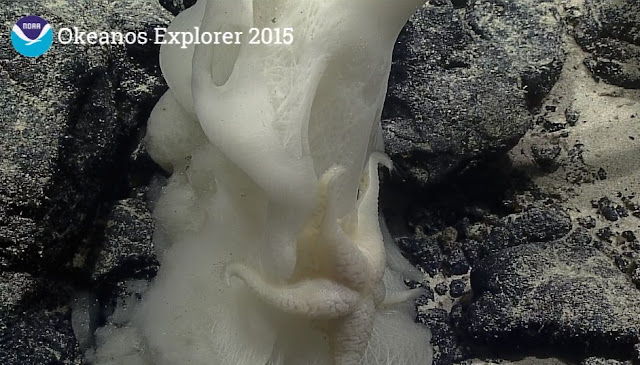 NOTHING has been known about the biology of Pythonaster. In one picture, we now have MORE information on its biology than we've known since this animals' description in 1885!!!

Worldwide, there are less than maybe 10 specimens of this genus known! 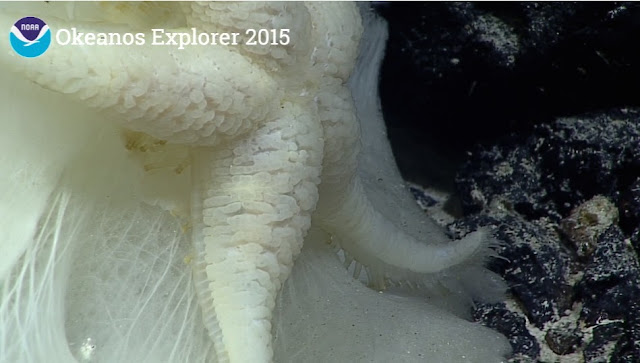 3. A bizarre community of deep-sea tunicates, barnacle plates and...????
So, the last day the ROV from Okeanos Explorer was deployed they investigated a channel between west Nihoa and West Pac where the water current was quite strong.

They encountered sponges (of course!) but curiously also a number of other bizarre members that formed an unusual deep-sea community. 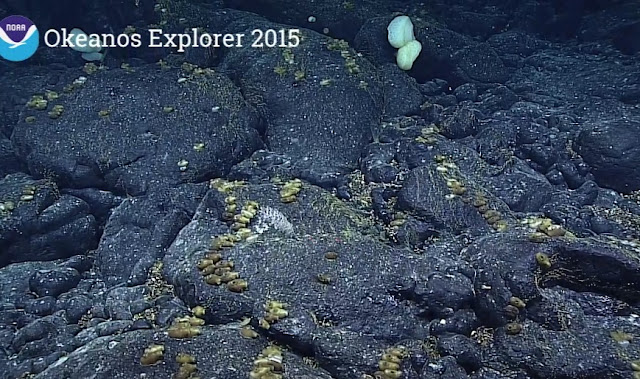 This community was made up of tunicates (Chordata-the same phylum to which humans belong!) aka sea squirts. These are filter feeders but not one of the usual species of tunicates one expects to find between 1000 and 2000 meters!!

These are those brown potato shaped things in the picture above. Note how they are all clustered together in neat, almost ordered serial rows. 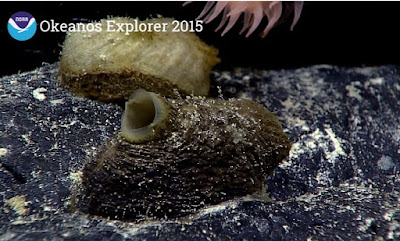 Also observed were these odd little yellow blobs, which formed long, reticulating networks. It was unclear what these were. Maybe more tunicates?? sponges?? 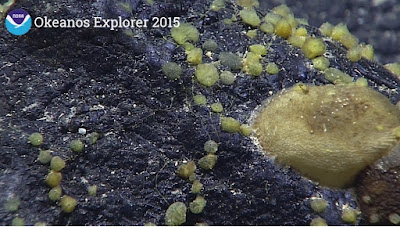 But they were ALL OVER the place!!  see all those long drippy yellow threads?? THOSE were all of those little yellow/gold blobs... 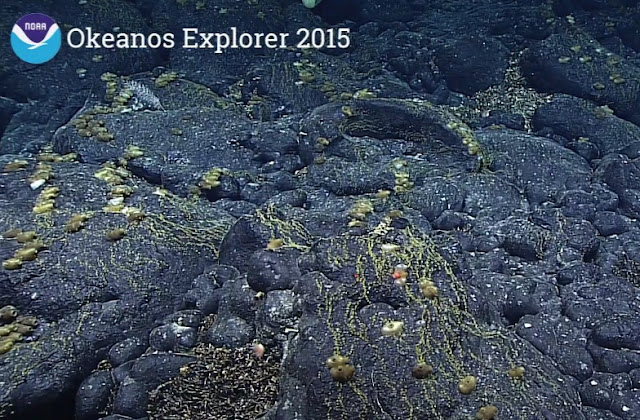 One other part of the mysterious west Nihoa community (and indeed all over the place): The  mystery of the dead barnacle graveyard??

Basically, it came down to the act that we were seeing these giant barnacle plates ALL OVER the bottom in HUGE abundance. Here's a close up, but you can see them above in the pictures.

But WHERE WERE THE LIVING ONES? 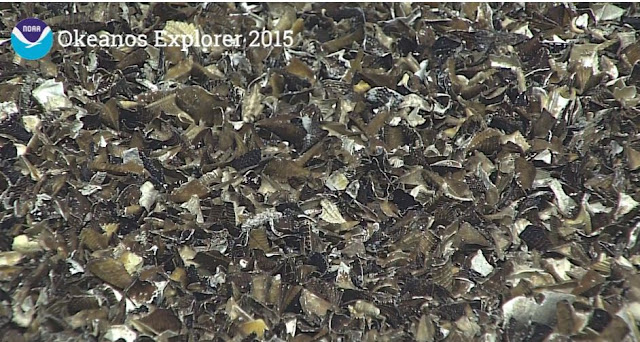 FINALLY the Okeanos Explorer team discovered them!! They were apparently giant deep-sea forms in the genus Chirona, But they were nowhere NEARLY as abundant as they were turning up in the barnacle "mounds". What happened?? Weird. 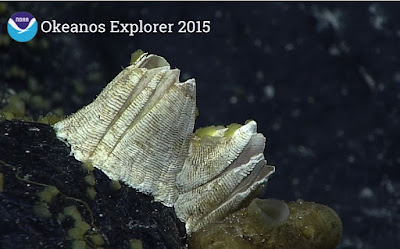 4. PURPLE CRITTERS!
Some animals in the deep sea are purple.

A purple squat lobster. Not sure if they got a name to it. 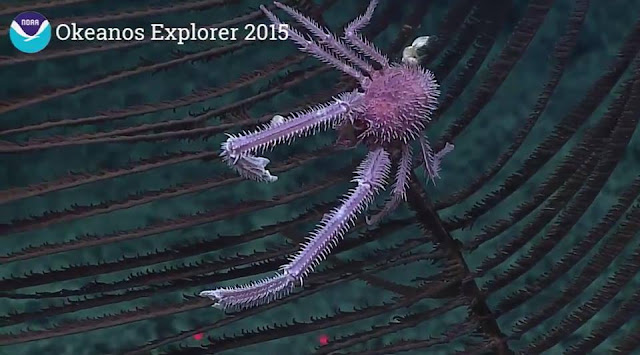 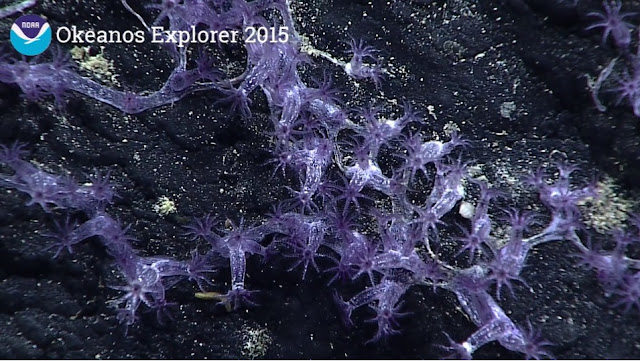 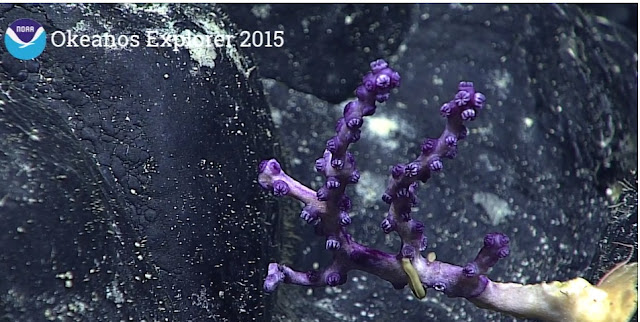 and this cute little jellyfish, which thanks to George Matsumoto at MBARI I know is called Crossota millsae!! 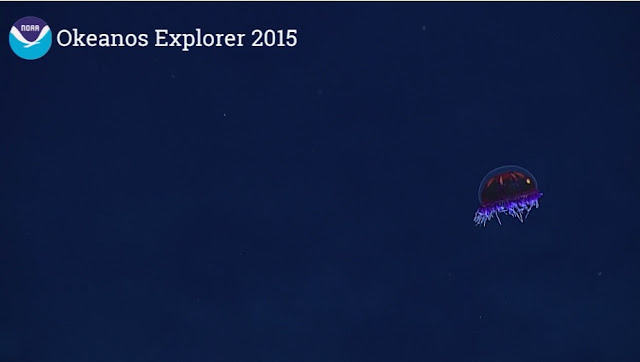 5. Nice Shots of the Slime Star Hymenaster!  But which one?
I have written about the oh-so lovely and unusual members of the Pterasteridae before (here). And we see them in deep-sea habitats all over the world.

But in the Indo-Pacific there is a HUGE expanse with MANY, many more species to be considered!

Here is a species observed by Okeanos Explorer just a few days ago! The hole, which opens and closes is called an osculum. 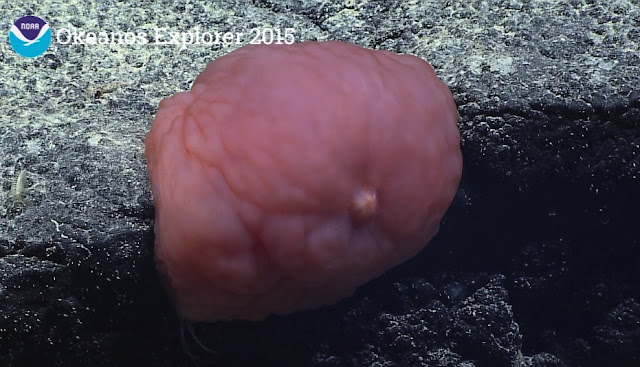 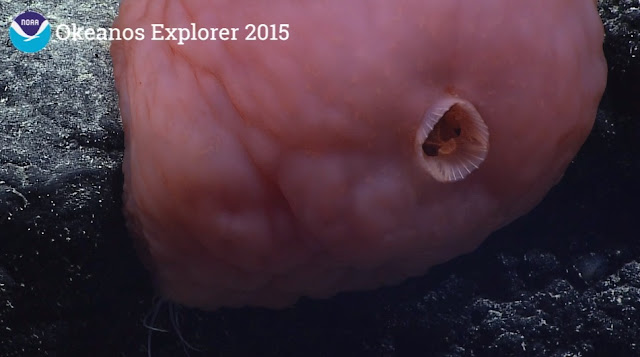 and thanks to Steve Hornik(@shornik ) this VIDEO!

I've studied Hymenaster in Hawaii before. This one, from an expedition I was on in 2001, was identified as Hymenaster pentagonalis, described by Walter K. Fisher in 1905 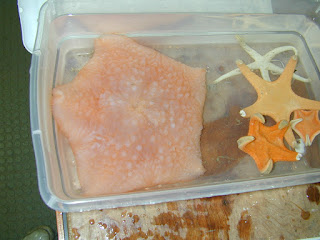 It emits a healthy defensive mucus!! 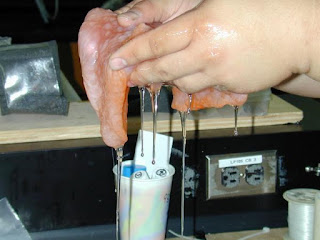 So, what is this purple one??? 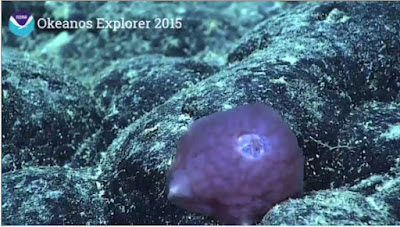 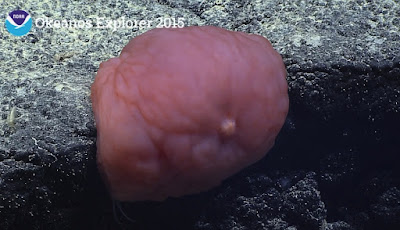 Many other cool critters seen-but I leave you with an assortment of weird glass sponges.... 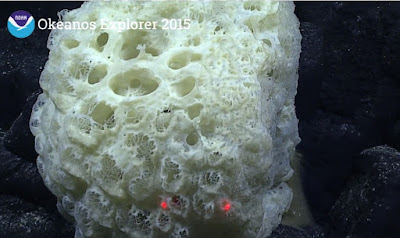 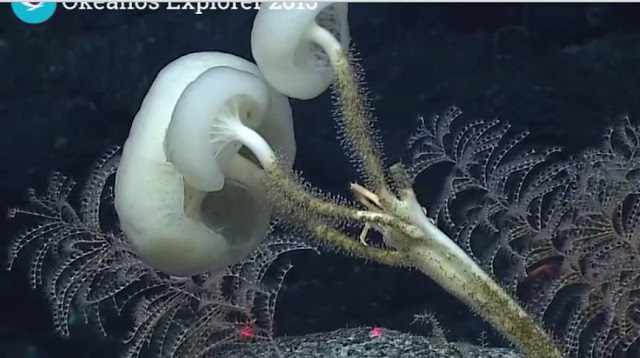 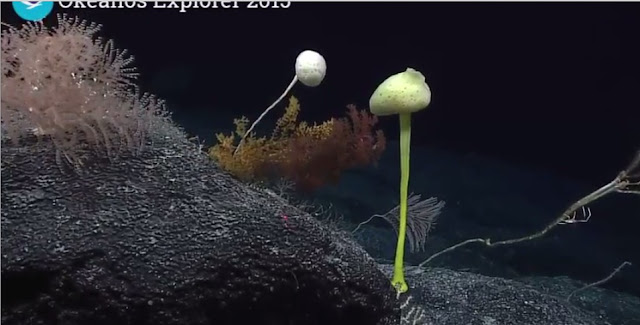 What will the next leg of the Okeanos Expedition discover??

Wonderful!
As for the barnacle species (photo number 13); do you know where I can find a higher resolution image of that specimen? I am working with similar species from off northern Chile and I would like to show this image to a colleague.

Request it from NOAA's Office of Exploration & Research. If you can't find it, there is a contact link at the bottom.

Thank you very much msme!