Holding on in a Rough World: Colobocentrotus atratus-the Shingle Urchin!! 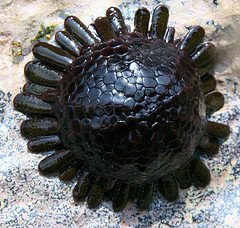 Today's we shift gears from starfish and take a look at sea urchins! Today we look at Colobocentrotus atratus (Echinometridae), a commonly encountered resident of the South and Central Pacific rocky intertidal. If you've ever been to Hawaii they can be frequently encountered along the edge of the harsh-wave swept habitats along its beautiful volcanic shores. 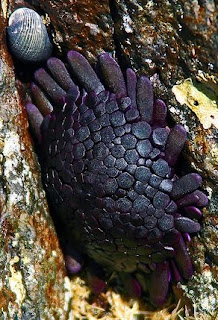 They are commonly known as the Shingle or Helmet Urchin and in Hawaiian is known as kaupali which translates to "cliff-clinging"... (thanks to John Hoover's Hawaii's Sea Creatures for this info) 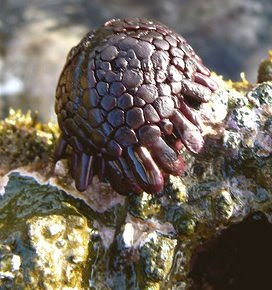 Notice the uniquely flattened shingle-like mosaic of modified plates covering the surface as well as the flange of flattened spines forming a close fringe around the edge.

Colobocentrotus lives in heavy wave-swept environments and its smooth, flattened plates lead one to automatically interpret them to be adaptations for surviving in these kind of environments.

A recent paper by Santos & Flammang (2007) investigates the biomechanics of how these neat beasties hold on.

It turns out..its ALL in the TUBE FEET! 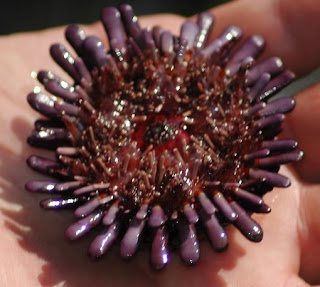 They measured the adhesion of this species against other more "normal" sea urchins (e.g., the spiny Echinometra) and they found that Colobocentrotus always presented the highest measured values.

* Colobocentrotus' attachment force allowed it to resist dislodgment up to water velocities of 17.5 m/s and even up to 27.5 m/s!!! In contrast, more "typical" echinoids, like Echinometra were disodged by water velocities superior to 7.5 m/s. 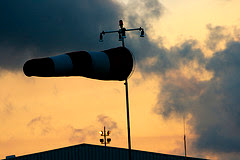 .....basically if this was compared with a strong windy gale..that would be enough to uproot trees and cause minor damage to buildings!!! Holy Carp!! (and according to Patrick, given the density of seawater, wave strength would actually make it WORSE!)

* The shape does not appear to affect the difference in drag and lift but may function to offset the amount of shear force directed onto the animal into normal force..effectively spreading the energy load around more evenly on all tube feet.

Thus, it seems that the ability to inhabit extreme water velocities in Colobocentrotus is tied to its very high number of tube feet and not to its particular morphology (although it does seem to help in other ways).

Adaptive notions for the overall shape suggest several ideas, including:

1. The streamlined morphology might be an adaptation to lessen other hydrodynamic forces such as wave impact.

2. The flattened spines may reduce spine breakage and therefore the energy expense of constant repair, etc.

3. The morphology seems ideal for retaining extra water which can be essential to resist heat and dessication stress at low tide.

This latter idea seems interesting given this pic of Colobocentrotus huddled together.... 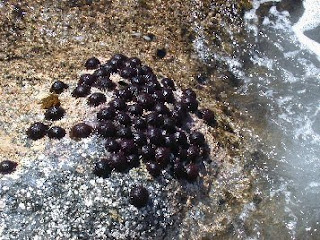 (Photos courtesy of Flickr and Photobucket!)
Posted by ChrisM at 9:57 AM

But they are just the right shape for kicking off into the ocean!!

... and the Western Pacific, too. Just found one at Padang Bai, Bali, last week.

living in the intertidal likely gives them refuge from subtidal predators for which spines may serve to deter. This would thus allow them to flatten out their spines? Just a thought...

There was some discussion in the original paper about specifically why the spines are flattened out. Different reasons were offered including the obvious hydrodynamic benefits, but also that the spines would be less physiologically expensive than big spines which would constantly be broken.

Other than people, I'm not sure if these have any other predators given the hostile setting in which they live...

FYI, these should now be called Podophora atrata.

got the citation for that?

Consultation with some current, active working sea urchin systematists suggests that usage of Podophora is not a consensus view by any stretch of the imagination. If you have a new paper that illustrates better evidence for synonymy then I will consider it.

I find the haughtiness of your reply interesting. Seems this attitude is somewhat common in taxonomy. That's a shame. Doesn't seem worth getting too worked up about to me.

one of the individuals I consulted was one of the editors of the WoRMS database. Honestly, I'm not a sea urchin person and that blog was written 3 years ago before the WoRMS Echinoid database was established. Colobocentrotus is still widely referred to in field guides and etc. Usefulness of the name supports the usage. Google immediately sends you to many useful hits for Colobocentrotus but not for Podophora.

Haughtiness? Perhaps. But ultimately Colobocentrotus serves the greater public at the moment. Plus it sends more hits to this post-which is possibly how you found it.

Taxonomy can be self-defeating at times-putting the cart before the horse. Your statements of taxonomic priority remain in the comments of this blog for anyone with an interest to find. And so your comments remain in the "public record" if they wish to find the name.

Ha'uke'uke is the more widely excepted term here in Hawaii, although kaupali is also used. They're good for eating too.

thanks for the info!

Hi, actually there is no literal meaning for the name, so I have no idea how it got that name or why people refer to it that way. But I do know that kaupali is rarely used. The prefix hā can be used as a causitive so hā'uke'uke would mean to make something 'uke'uke, but there's no meaning for 'uke'uke, so I have no idea. I guess it's just a Hawaiian species name.

I took a trip to Maui and saw these on the rocks and thought they were beautiful. I wondered if they were a type of sea star originally. Thanks for your blog - gotta love google searches.

Sure! Always happy to help!

Some website said that you can eat the shingle urchin's yellow eggs. Is that true? And that 'podophora atrata thing is wrong. That's not the scientific name for the hā‘uke‘uke.
I'm doing a research paper for my social studies class on the hā‘uke‘uke, by the way–thanks for letting me use your website.
The hā‘uke‘uke is in the Hawaiian creation chant.

Philip,
This name Colobocentrotus remains accepted as per the World Echinoidea Database:

Podophora was an older name which has since been changed in status to become a subgenus of Colobocentrotus. I've heard it argued that Podophora remains the "correct" name but these kinds of taxonomic battles are often unsettled and sometimes do not result in universal acceptance by scientists. This was commented on by Andras Kroh in the Database.

The only Hawaiian name I stand by is the one stated in John Hoover's book which I used in the original blog. The discussion thread may or may not have more information which you can find useful.

I've seen accounts that people have eaten shingle urchins. I assumed this was the gonads, which the Japanese refer to as uni, as is done in other urchins but I've never had it nor known exactly how Colobocentrotus is eaten.

I'm guessing from the picture of one being held in a hand that they are not venomous at all?

Can anyone tell me if these urchins which grow outside our property are harmless for dogs to eat? We are new here and my dog has recently discovered them.

You don't indicate where you live exactly.. You mean the ones in the blog post? So you live in Hawaii? The animals so far as I know do not demonstrate any toxic qualities.. as far as I know most urchins do not. BUT the spines of some species are sharp and even if they are not pointed they might present choking hazards..

Starfish DO show toxic qualities and tis often best to keep dogs and pets away from them.