When Starfish Eat TOO MUCH!! 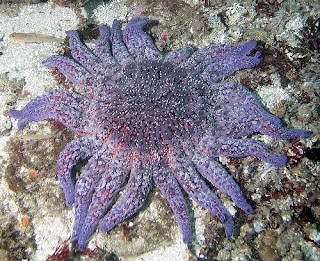 Perhaps one of the unique qualities one sees in starfish is their propensity to devour things that are actually BIGGER then their own mouth and disk....

If one thinks about it, these are the ONLY echinoderms that are known to uh..."overeat" 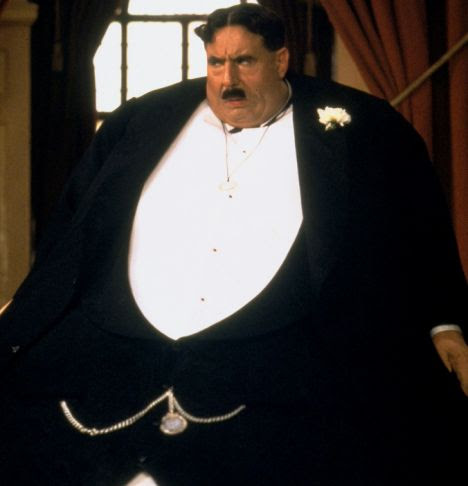 (from Monty Python's Meaning of Life..."would you like a wafer-thin mint?")

Here's a few..
The Paxillosida. A group of starfish that live in unconsolidated substrate (i.e., mud or sand) with an according suite of morphological characteristic adaptations to match, for example:
One of the peculiar aspects of the paxillosidan lifestyle is that they either lack or have a reduced stomach..so, whereas most eat by extending that stomach over something?


Many paxillosidans SWALLOW their prey whole!


This is like saying "That food never touched my lips-I just tossed it right in!" that's the joke a paxillosidan would be telling at the water cooler with the other starfish.

1. Luidia superba.
One such animal is a widespread "sand star" called Luidia, which inhabits shallow water tropical to temperate habitats all around the world. We've briefly discussed other Luidia species on the Echinoblog in videos (and videos here also)and etymologically....

Here's one really cool species from the East Pacific..specifically, the Galapagos-
Luidia superba. L. superba is one of the world's LARGEST starfish 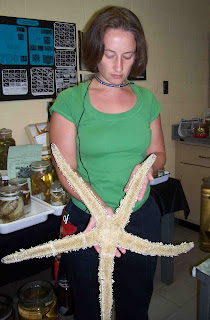 and apparently, is caught en flagrante delicto with a big Encope grandis sand dollar in its gut! 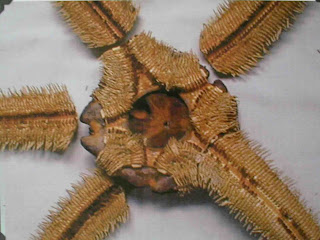 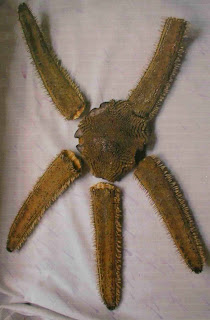 Maybe they suck on them the way we chew on gum, lollipops or ice cream bars? 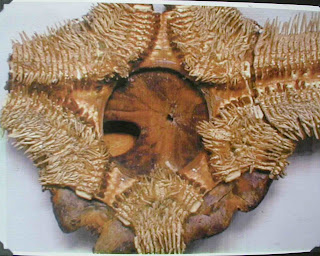 2. Proserpinaster neozelanicus
In 1999, Helen Clark and Geoffrey Read described the presence of polychaete "quill worms" in the gut of P. neozelanicus, a frequently encountered astropectinid (also a Paxillosidan starfish). 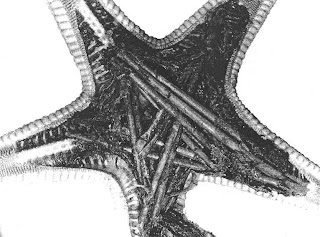 These worms (Hyalinocecia spp.-fam. Onuphidae) have realy distinctive rigid, tubes. The stars eat the juicy worms inside but the tubes stay in the body...

That's kind of like eating christmas candy with the candy boxes STILL ON THEM and keeping them inside your GUTS and BODY spaces and stuff!!

They would totally stick out of you at weird angles. And sometimes they do...The Forcipulatida
This is a very different group that includes familiar species such as Asterias (the common Atlantic starfish) or Pisaster (the common purple or ochre starfish).
In contrast to the paxillosida, forcipulatidans have cardiac stomachs but some species EAT a lot....

1. Rathbunaster californicus
A multi-armed starfish which lives off the west coast of North America in relatively deep-water.
Prey? Lots.. They can feed on crustaceans swimming by and are voracious predators that eat just about anything that they can get their arms and mouth around (yes that sounds dirty..just deal with it).... 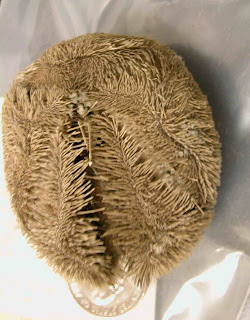 Shown here as the COMPLETE prey item of a very hungry Rathbunaster!! The test has been completely swallowed and sits in the mouth (i.e., the disk)!! 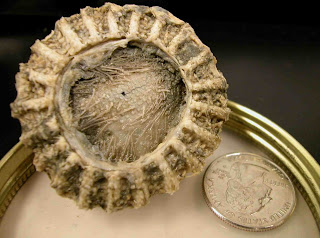 So, in this pic? We are looking at the oral side of the mouth.

The hairy/spiny stuff at the center is the sea urchin.

The rows around the edge are where the arms would connect to the disk. Here's a side view for persepctive... 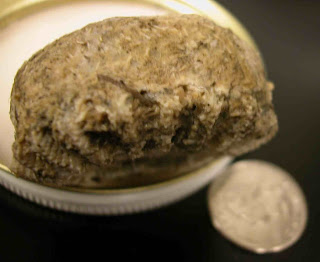 We see the "pens" of squids (i.e., the leftover hard parts in the squid body) sticking up through the body wall (shown in the pic above) and eventually were thought to be ejected OUT of the aboral body wall!! 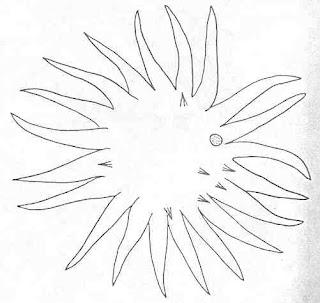 (pic shows "pens" sticking out through body wall)
He even reports that some other species of starfish might actually push the "inorganics" from their meals out through the TOP of their body THROUGH the "top" (i.e., aboral" surface)!!!
Posted by ChrisM at 6:47 PM

Incredible. I would love to see one pushing the Loligo pens out it's aboral surface. Do you know or can you speculate on how they would facilitate this?

The pens already kind of push up against the body surface..and Pycnopodia's body wall is already pretty decalcified. Its probably something it doesn't like doing-but in theory it could probably just pierce or work its way through the disarticulated plates on the disk surface...