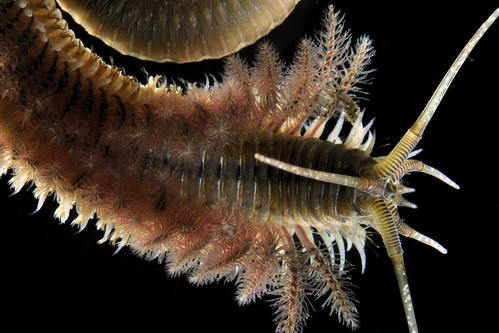 This week I celebrate International Polychaete Day which falls on July 1, the birthday of noted polychaete expert Kristian Fauchald, recently of the Smithsonian's NMNH, who passed away in April of this year (2015). 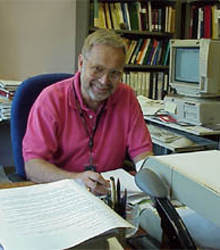 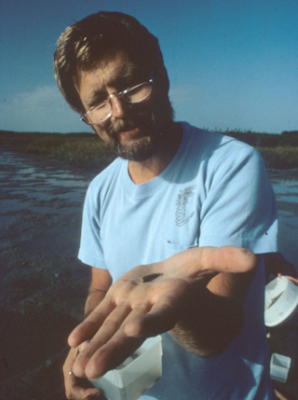 What are polychaete worms?
Polychaetes are segmented worms, which are distinguished by their leg like structures called parapodia, which each bear distinct bristles (hair-like structures) known as chaetae which are composed of chitin (the material found in arthropod skeletons). 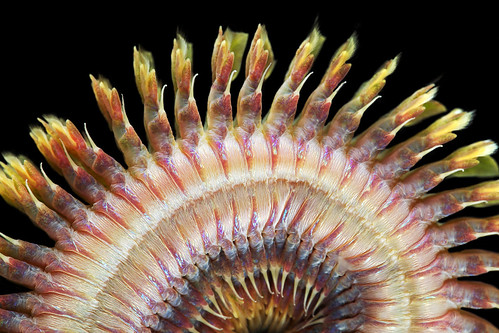 In the traditional sense, polychaetes are usually classified with earthworms and leeches.  But more recent molecular phylogenetic studies have shown that the "Polychaeta" is actually a big messy group that likely includes groups of worms which, at one time might actually have been classified as separate phyla !
This includes spoon worms (echiurans) 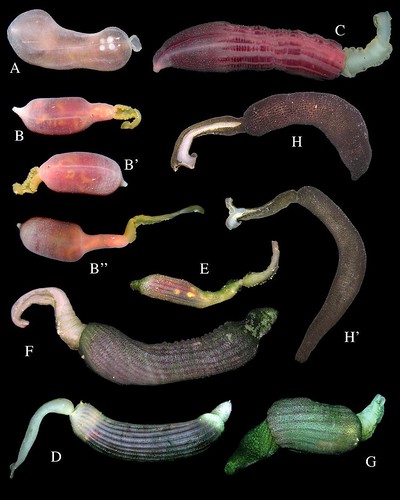 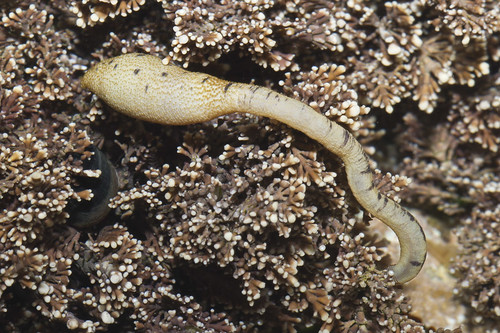 How many are there and where do they live?
Its thought that there are likely over 13,000 species of polychaetes which live in every ocean and at every depth (intertidal to >7000 m abyssal depths) and indeed a small proportion of them (about 168 species) even live in freshwater. The diversity of polychaetes is stunning. Those 13,000 species reside within 80 families!!

As I've shown in photo essays here (by Arthur Anker), they can be STUNNINGLY beautiful!

and some, such as these forms from Antarctica can be quite huge.

Feeding ranges from deposit feeding on sediment, filter feeding to of course, raptorial predation which has been made famous by the Indo-Pacific Bobbit Worm! (Eunice sp. ) 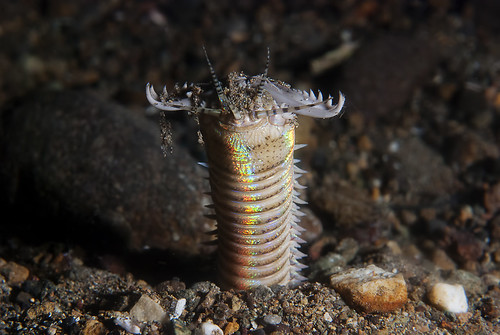 So, here's five subjective things about polychaetes for IPD!!!

1.  Eat the Palolo Worm! Out in Guam and the Solomon Islands, there are several island cultures who are privileged to be around swimming polychaetes during their reproductive periods, where they undergo a stage/morphological transformation known as epitoky.

The worms swim up into the water column en masse as seen here..

These worms are then promptly eaten by the locals. There are many accounts of this, such as here on National Geographic Palolo worm is considered quite the delicacy and is apparently very reminiscent of caviar and is served here on toast. A traditional presentation.

2. Polychaetes that glow in the dark!

What would any group of invertebrates be without at least a FEW members that glow in the dark??? (i.e., emit bioluminescence?)

I actually found two: this one is the "Bahamas Glow Worm" aka Odontosyllis enopla. This species looks like a more conventional polychaete


And then you also have the pelagic (aka swimming) polychaete, Tomopteris! which is a bit more unusual given its habitat (the water column)
3. They have a fossil record dating back to the Cambrian
All of the major invertebrate groups can usually be traced back to the very earliest moments in Earth's history when the first evidence of life appears. Polychaetes are no exception.

This pic shows what is thought to be a Cambrian polychaete from the famous Burgess Shale in Canada. It is  appropriately enough called Canadia spinosa
The Royal Ontario Museum has a fairly detailed page on this animal here including some nifty paleo art showing what the animal might have looked like alive.. 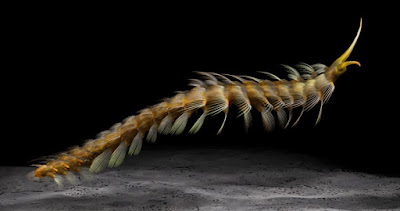 There were apparently a few of these Cambrian polychaetes, including Burgessochaeta,  Phragmochaeta and others..  These were thought to have paddles and interpreted as having the ability to swim. Length: 2-4 cm, so some tiny beasts.


4. Many polychaete species live in close relationships with other animals
The most photogenic polychaetes might be large predatory ones or possibly even the colorful Christmas tree worms..but there are many polychaetes with a cryptic lifestyle which includes living as a "guest" on other, larger animals.

Sometimes with strong relationships than had been surmised. I wrote about the scale worm Arctonoe vittata a few years ago.  These worms live within the tube foot groove and along the underside of the leather star, Dermasterias imbricata on the Pacific North West coast.

In experiments, not only did the worms move to the sea stars when separated, but the seastars moved toward the worms!
Scale worms are very dedicated commensals to their hosts.. As I reported from my time in Japan, these stayed with their host, a solasterid until death... 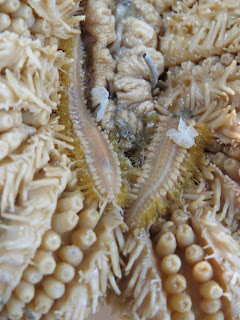 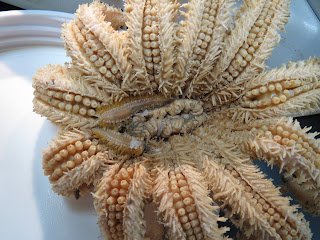 Polychaete worms sometimes have highly specialized relationships. Here are a group of worms known as myzostomes, which are parasites on crinoids. and apparently have been parasitic on crinoids since the Jurassic! (Here) 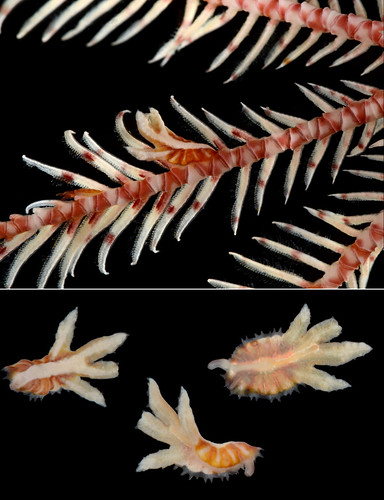 5. Many polychaete names are derived from greek mythology: nereids (nymphs) and goddesses!
A comparison of the names of various nereids (sea nymphs or female water spirits) shows that there are in fact a LOT of them shared by a host of polychaete worms.. 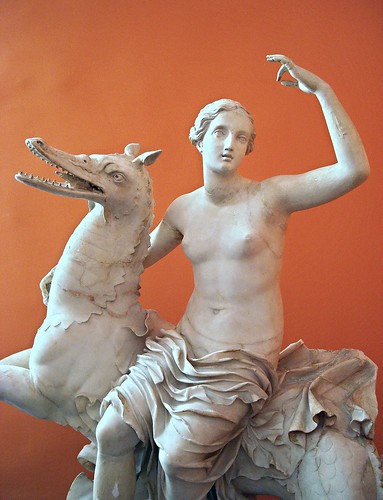 Everything from the genus for the "Bobbit Worm" Eunice sp. 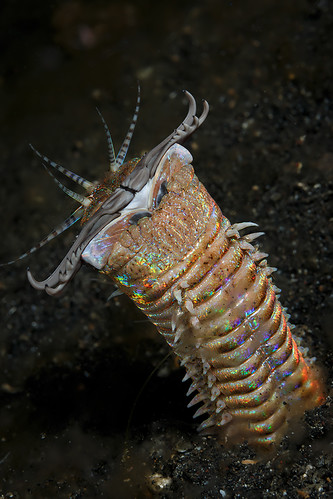 to Nereis which is itself, the Greek word for the water god Nereus 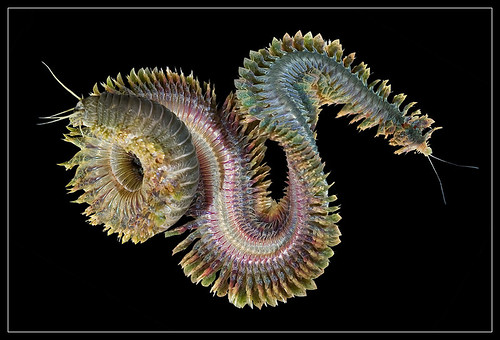 Amphitrite, Goddess of the Seas... 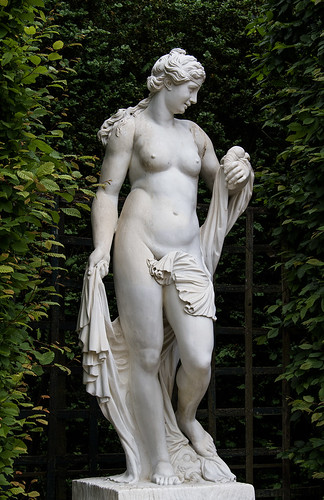 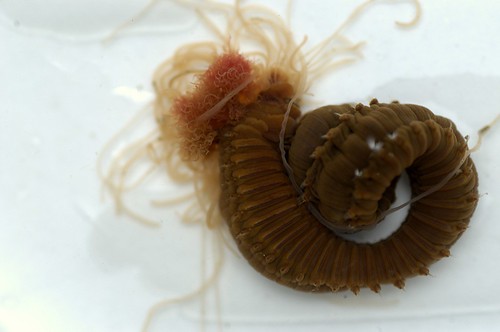 While I'm not privy to the original etymology of these names, its not unusual for the original scientists to name organisms which they perceived as beautiful with namesakes which befitted them...

Happy International Polychaete Day!
Posted by ChrisM at 5:41 AM

Mythology-inspired names are very popular among butterflies, too.

To be all precise, what is eaten isn't the palolo worm itself, but the semi-autonomous gamete-carrying tail it breaks off.