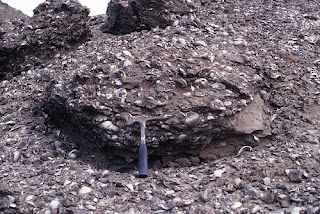 (from Littoraria on Flickr)
Believe it or not, when you get under the ice there are more than a few decent places to find fossils in Antarctica (see above).

Work by Dan Blake at the University of Illinois and colleagues have recovered a great many invertebrate fossils from Seymour Island, a small island in the Antarctic Peninsula region.

Seymour Island deposits a great many invertebrates, including mollusks, crinoids, and sea urchins. But there was an incredible diversity of fossil asterozoans, including 6 genera and species of asteroids and one genus/species of ophiuroids.

Specifically, we see how paleontology intersects with the deep-sea, the Antarctic and Climate Change.

To illustrate how this all ties together..let me introduce you to one animal in particular:

The genus Zoroaster (family Zoroasteridae). A genus of starfish with about 20 species that occurs primarily in the deep-sea (~300-5000 meters) throughout the world in the Pacific, Atlantic, and Indian ocean basins. Mah 2007 recently developed a phylogeny and monographed the group. Zoroasterids are interesting because they have only a single marginal plate series, which is a character shared by many Paleozoic forms, but that is only one of the many reasons they are among the most interesting of starfish to study..

Zoroaster sp. from the North Pacific: 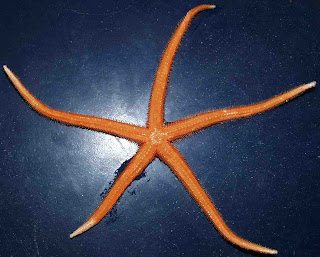 and now, here is one from the Eocene La Meseta formation of Seymour Island in Antarctica!! Fragments apparently were not uncommon in the area. 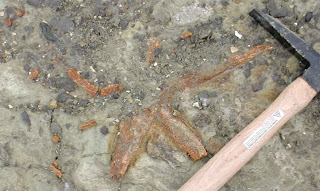 (courtesy of Dan Blake, UIUC)
Another quick comparison of a living Zoroaster sp.

and an Eocene (i.e., fossil) Zoroaster from Seymour Island. 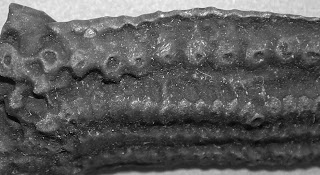 Morphologically, they are VERY close.

1. Living Zoroaster live in deep-water habitats. vs. fossil Zoroaster which lived in shallow-water sediments (i.e., the ancient environment can be inferred by geologists to be shallow-water based on distribution of the fossils, and the sedimentary features such as size, composition, sorting and a number of other physical characteristics including the form of the sediment distribution and formation ).

In theory, you could have literally gone wading on Seymour Island during the Eocene and picked up one of these starfish (that today live in 1000 m depths!) in knee-deep water!!! 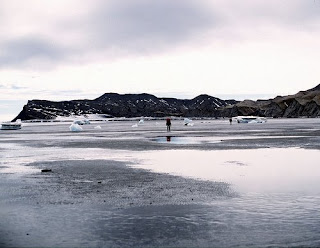 (from Littoraria on Flickr)
2. Eocene Zoroaster lived in pre-glacial settings. The Eocene Antarctic was much warmer than it was today, resembling the Pacific Northwest in many ways. Temperate rorests extended to the poles. A substantial climate change event took place during the Eocene/Oligocene, which saw the formation of the Antarctic Counter Current and the glaciation of Antarctica.

3. Interestingly, to my knowledge, Zoroaster (and indeed no zoroasterids) have ever been recorded from the Southern Ocean today. (although they are found in adjacent sub-Antarctic waters outside the ACC). But of course, absence of presence is not presence of absence..

Lots of Questions:
So we see some interesting recent precedents. Starfish give us insights into major and relevant questions simply by being there.....and then not being there.