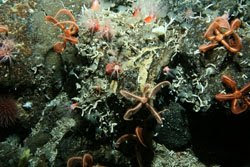 (from NIWA 2008)
Wow!
Over the weekend, what can only be described as an enormous echinoderm suspension feeding colony was discovered on Macquarie Ridge by the R/V Tangaroa operated by my good friends at NIWA in Wellington, New Zealand. This involved scientists working in association with the Census of Marine Life.

Video can be seen here. 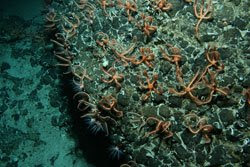 And not to be left out..a brisingid suspension feeding starfish. Hard to see which one it is from here... 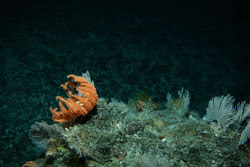 
This was not only ophiuroids and asteroids...but also sea urchins, corals, sponges, and seems to be conspicuously dominated by invertebrates...

To quote directly from the CENSEAM Press Release:

Census of Marine Life-affiliated scientists, plumbing the secrets of a vast underwater mountain range south of New Zealand, captured the first images of a novel "Brittlestar City" that colonized against daunting odds the peak of a seamount - an underwater summit taller than the world's tallest building.

Its cramped starfish-like inhabitants, tens of millions living arm tip to arm tip, owe their success to the seamount's shape and to the swirling circumpolar current flowing over and around it at roughly four kilometers per hour. It allows Brittlestar City's underwater denizens to capture passing food simply by raising their arms, and it sweeps away fish and other hovering would-be predators.

This has started to pick among the International News...

Could this be another example of the Paleozoic style ecosystem we discussed in the Antarctic last week?
Posted by ChrisM at 9:39 PM